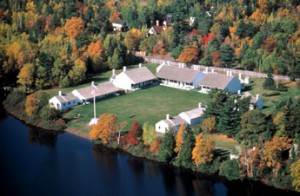 Fort Wilkins is the northern most outpost for the nation’s perimeter defense, and was established in the year 1844 at Copper Harbor in the Keweenaw County in the state of Michigan. The fort was established primarily to defend the copper miners from Chippewa Indians aggressive raids. Fort Wilkins was abandoned in 1870, and it has sense then been turned into a national park.

The war of 1812 still rang in the hearts of the American people, and it taught many harsh lessons. As such, the government wanted to ensure that the copper boom was well protected, and established for Wilkins to do just that. Consequently, the fort also acted as a local police force for the natives in the land. This was all done by a meager 105 men, who braved the harsh conditions of the northern winter and its longevity. The forts inhabitants often found themselves facing an inescapable enemy, which would be simply boredom. Boredom led to low morale, and also led to the use of illegal whisky products in order to find some form of entertainment.

Later on, when the war with Mexico began, the 5th U.S. Infantry was shipped out in order to assist, leaving the fort under the care of a single individual. This was done over the course of two years. The first half of the soldiers shipped before the wat began, followed by the second a year later. This happened during the year of 1846. At this point, the fort was all but abandoned, having little purpose as the copper boom has started moving more southward, and policing this was handed over to the local communities for ease of organization.

During the nine year period that Sargent B. Wright managed the fort on his own, he found it being used to house local survey parties, and many of the buildings were turned into private residences and simple storage units. In 1855, Fort Wilkins passed into civilian care by Doctor John. S. Livermore. Livermore operated a health spa there, but in 1861, that venture came to an end with his own death. This left the fort, yet again abandoned, and for the foreseeable future, the fort would no longer be of service to much of anything.

However, this wouldn’t last long, as following the American Civil war, the fort was re occupied by the US military in 1867 to serve as a place for people to serve out their enlistments before returning home. This would result in the fort being abandoned just three years later, and it wouldn’t find any use until being converted into a state park. This fact alone is rather surprising, as even though the fort has been around for 164 years, it was only used for military purposes for 5 years in total.