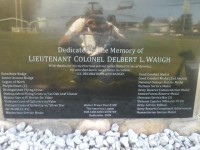 Colonel Delbert L. Waugh was a lieutenant colonel in the army before he retired and worked as a pilot for Angels MedFlight.  As a result of his bravery and dedication, Waugh earned a total of 25 decorations and badges, including two Purple Hearts [4] as shown in the picture to the right.

Shortly after Waugh’s death in 2008, the Oxford, Michigan American Legion Post 108 dedicated a memorial to him in the form of a Bell AH-1G Cobra attack helicopter and a plaque [4].  The Oxford American Legion chose to honor him because of his selfless career in the Army.  According to the Oxford Leader, Waugh was shot down seven times during the Vietnam War providing air support to ground troops, flew rescued missions, and protected other aircraft during operations [4].  One story the Oxford Leader mentioned was that Waugh managed to land a damaged helicopter despite being shot through the cheek and lived to tell the tale.  Throughout his military career, Waugh received a grand total of 25 decorations and badges, many of which were thanks to his merits and valor.  Waugh remained in the U.S. Army Reserves after his active military service, and he eventually became a lieutenant colonel and the commanding officer of all Reserve Army Aviation in Indiana and Michigan.  Throughout his whole career with the Army, Waugh served for more than 25 years and accumulated more than 7,000 flight hours [4].

Even after that distinguished military record, Delbert Waugh still chose to fly and serve his nation.  Waugh chose to serve his country in the form of flying medical transport helicopters for fifteen years before his death in October of 2008, when he died while piloting an Air Angels medical helicopter that crashed in Aurora, Illinois.  Everybody on the helicopter was killed, including an infant patient and two other crew members.   Waugh was in the midst of his second 12-hour, 7-day-a-week shift when he crashed into a radio tower [5].  Normally the pilots’ works one week on, on a week off; but due to an open spot to cover for a pilot who had recently quit, Waugh was on his second week when the crash happened.  Waugh’s son Brad Waugh said, “As long as the FAA would let him fly, he had no intentions of stopping or slowing down” [5].  That quote shows Colonel Waugh’s mindset about flying and when combined with another quote from his son — “Anybody who needed help he did everything in his power to do it” [5] — shows the Delbert Waugh was dedicated to serving his country and the people in it.

Delbert Waugh was an American hero; he put his life on the line for his country and his neighbors.  He was one of the brave men and women who fought in the Vietnam War and continued to serve though countless battles.  Waugh endured the long years of the Vietnam War as a pilot, serving his country by providing air support, protecting allied aircraft, and even flew rescue missions [4].  The popular television show M*A*S*H shows life for a mobile army surgical hospital during the Korean War and while M*A*S*H is a television show, it portrays what goes on at army hospitals near the front lines.  Colonel Waugh lived a life similar to the life portrayed in the show.  In terms of conditions and environment, the Vietnam War is resembles to the Korean War and Waugh was one of the pilots that transported the wounded on occasion.  Waugh knew what it was like to fly the wounded through enemy air zones.  Despite Waugh not being a surgeon, he was still around lots of blood and death.  Waugh himself even got stranded behind enemy lines with a gunshot wound in his cheek.  Despite the wound Waugh still managed to land his damaged chopper and hide until the Viet Cong left the area and walked for days and got rescued by American forces [4].

Waugh continued to serve the U.S. army as part of the reserves where he eventually rose to the rank of lieutenant colonel.  Part of Waugh’s duty in the reserves was to instruct and train the next generation of pilots.  Waugh continued to serve in this capacity for over 25 years and accumulated over 7,000 flight hours [4].  Even after Waugh retired from the military Waugh still served his country by being a pilot for Air Angels, a commercial company that transports patients from one hospital to another via aircraft.

The death of an American hero

October 15th, 2008 marked a sad day for the country, Delbert Waugh died in a helicopter crash.  While many won’t remember or even hear of Colonel Delbert Waugh, the United States still lost a great soldier.  Waugh was flying an Air Angels Bell 222 helicopter when it impacted a radio station tower in Aurora, Illinois.  Everybody on board was killed, including Waugh, the Pilot, Ronald C Battiato, the flight paramedic, William “Bill” Mann, the flight nurse, and a 14 month old infant, Kirstin Blockinger, the patient of the flight [1].  The accident was caused when the helicopter flew directly into the support wires of the 734 foot radio tower, about 50 feet below the structures peak.  For an unknown reason the helicopter was being flown around 1,300 and 1,400 feet as opposed to the 1,500 feet above sea level during the day and 1,700 feet at night that Air Angels pilots are supposed to do [2]. The local news station ABC 7, reported “local flyers say medical helicopters tend to fly between 500 and 700 feet above ground level, or 1300 to 1500 feet above sea level in Aurora, Illinois, so air pressure won’t complicates a patient’s condition” [3].  That statement would prove even truer for a 14-month old infant who hadn’t had the time to develop an immune system and thus is very accessible to changes caused by the environment.  That may explain as to why Waugh was flying so low but that doesn’t explain why Waugh didn’t avoid the radio tower support wire.  The tower was clearly marked on all aviation maps of the area and the radio tower’s light beacons were working before the impact.  One witness, Carolyn Constantino, noted “That red light on top is constantly going.  First thing I noticed there was no more red light” [3].  That statement shows that the tower was lit and could be seen from the ground and most likely the air as well.  Three minutes before the crash Waugh reported into an air-traffic controller, saying he was above Aurora and on his way to downtown Chicago at 1,400 above sea level [2].  The helicopter was equipped with a “combined global positioning system, navigation and communications radio mounted on the instrument panel.  The device is capable of displaying terrain and obstacles, such as the radio tower, but the necessary software was not installed.”[2].  One possibility for the crash is that Waugh thought the device was active and working and had no reason to suspect that it wasn’t activated, considering he was at most a dozen minutes into its flight.  Either way, Waugh was very familiar with the tower as he had flown that route hundreds of times according to the airport manager [3].  Despite all the evidence, friends of Waugh doubts it was a pilot error as expressed in this statement from John Jacobe, a friend of Waugh: “Based on this history of what [Waugh] has done in the military, all the flights he’s done for Air Angels and all the other flying he’s done, it would surprise me if it was a pilot error.” [3].  Either way, it’s impossible to know if it was a pilot error like the evidence suggests, or a mechanical error that went unnoticed by the investigators, or something else.  What is known however is how much this accident hurt the area and the country.

Whatever the reasons behind the crash were, it doesn’t change the impact of it.  The crash tore families apart and impacted a whole town.  It had such an effect on the community it happened, that the city of Aurora held a memorial service to honor the victims and to mourn for their deaths [4].  Caryn Beisner, a flight nurse, said “I think we have to show support for the job, because it is a hard job, and it is, I don’t know, dangerous.  It can be.  It could be any one of us” [4].  That statement shows that the co-workers of the victims were saddened by it.  While they may feel anger at the victims for making a mistake, they accepted the fact that it could happen to them as well.  By accepting that, it brought together a community that could help mend the wounds caused by this accident.  Not only was the loss of life was part of it, but America lost a hero.

That loss of an American hero is a huge wound for America.  In a time of terrorism and conflict, to lose another war hero is hard.  While the Midwest region isn’t as affected as areas directly involved with the conflict such as the Middle-East or even New York City where the World Trade Centers were destroyed seven years prior; it still affects the Midwest.  The Midwest has sent countless people overseas to fight against terrorism and to heal the wounds caused by war.  To lose another one so close to what many call home is hard.

The following is a transcription of the memorial stone shown in the first picture:

Published in Monument and Person