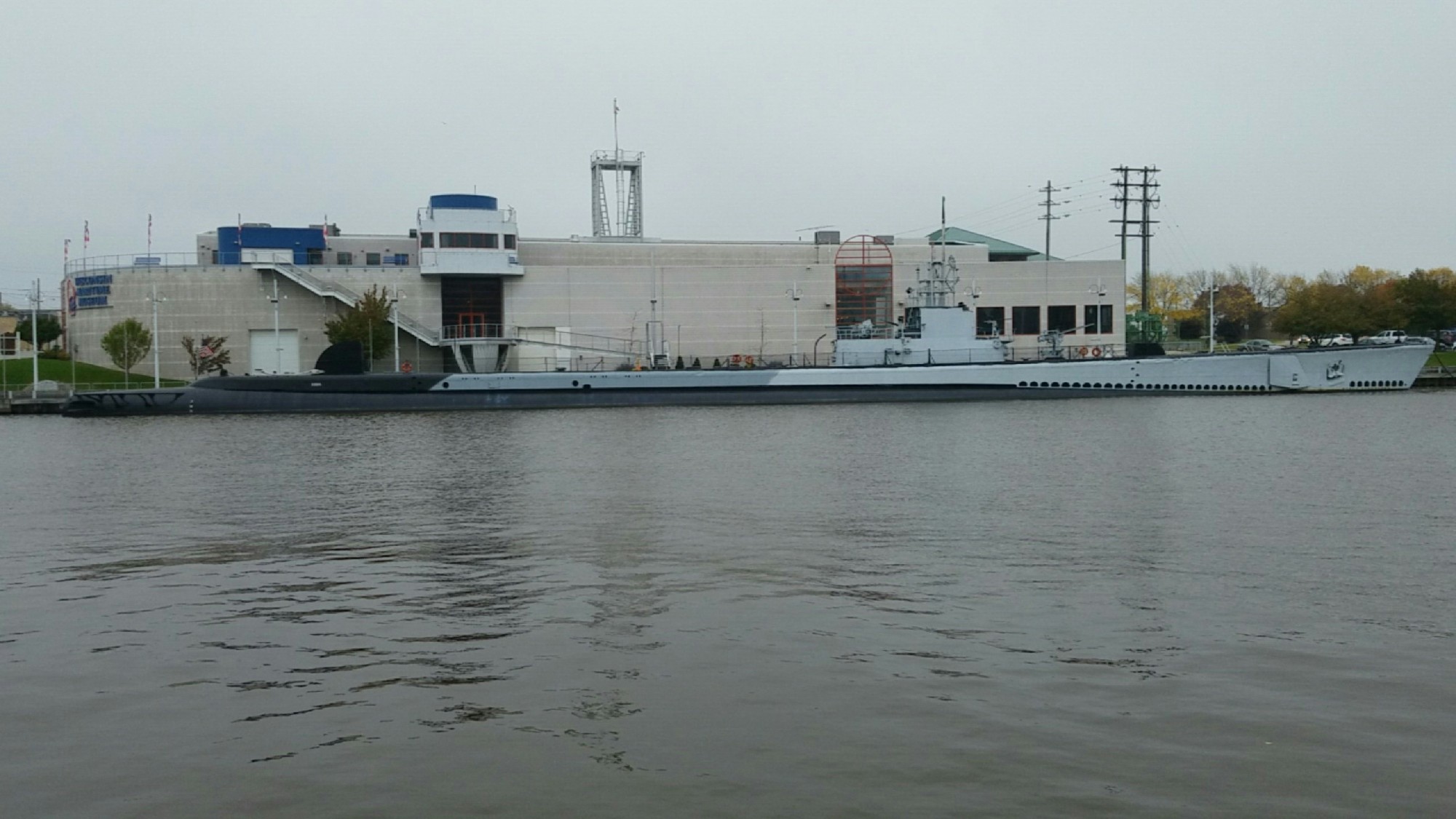 The USS Cobia is a National Historic Landmark held at the Wisconsin Maritime Museum in Manitowoc, Wisconsin. This museum displays the historic submarine for all to see. It is open to the public to look at from anywhere on the river, streets, or sidewalk. The USS Cobia (SS-245/AGSS-245), a Gato-class diesel-electric submarine, was first laid down on 17 March 1943 by the Electric Boat Company of Groton, Connecticut, launched on 28 November 1943, and commissioned on 29 March 1944 with Lieutenant Commander Albert L. Becker in command. It was one of the most effective submarines of this type during the two decades that it was in use. It had six patrols during World War II and every patrol it went on it sunk many ships: troop transports, battleships, or supply ships. This ship was a very important vessel from the time it was launched until 1959 when the U.S. Navy considered it obsolete and transferred her to the Milwaukee Naval Reserve Center where she served as a training platform for eleven years. On 1 July 1970, it was struck from the Naval Register and towed to Manitowoc, Wisconsin where she serves as an international memorial to all submariners.

During World War II, submarine forces played a very important role for the United States and cannot be looked past. “American submarines sank over 600,000 tons of enemy warships and more than 5,000,000 tons of merchant shipping, thus destroying much of Japan’s ocean commerce.” (NPS) Submarines equaled less than 2 percent of the U.S. Navy but sank more than 30 percent of the Japanese Navy, which included eight of their aircraft carriers. American submarines created a blockade against Japan which stopped transportation of oil, iron, food, and other materials they needed to continue the fight. By 1945 submarine warfare made it practically impossible for Japan to sail the ocean. They were unable to continue the war on outside of its homeland. However, these victories at sea did not come at a small price: 52 boats and 3,500 men were lost during this war.

World War II submarines were only capable of being under water for so long that they were basically surface ships. The diesel engines allowed them to have high surface speed with a long range but, when underwater, it was slowed heavily. The electric motors inside them were powered by batteries that had a short operating time. When the batteries quit and needed to be recharged, the submarine would have to resurface to run the diesel engines and charge them. This was a minor problem because they could only go so far underwater before having to resurface which made them viable to surface attacks from enemy ships.

The USS Cobia (SS-245/AGSS-245) was part of one of the largest classes of submarines of the time with a length of 311 ft 9 in, a beam of 27 ft 3 in, and a draft length of 17 ft. It was powered by four General Motors V16 diesel engines driving electric generators. It had two 126-cell Sargo batteries and two propellers. When the submarine surfaced, it would travel at 21 knots and 9 knots when submerged (hnsa.org). The range of this vessel depended on the speed, but when it was set to 10 knots the Cobia could travel 11,000 nautical miles making it one of the best of its class. She could dive to about 300 feet.

The crew of this vessel was ten officers and seventy enlisted members which was better than most other submarines at the time. It was very beneficial to how the submarine was able to run. More crew members meant more hands ready to navigate, scout, or attack. The Cobia contained ten, 21- inch torpedo tubes; six in the front and four in the rear. The submarine could carry twenty-four torpedoes. On the deck, it had a 50 caliber gun along with a Bofors 40 mm and Oerlikon 20 mm cannon (NPS). Whether it was on the surface or underwater, this submarine was very deadly.

The USS Cobia represented the U.S. submarine forces that fought against the Japanese in WWII for multiple reasons. The first reason was that the USS Cobia had 6 war patrols during its time and earned 4 battle stars. It sank 13 Japanese ships which was over 18,000 tons of their shipping. The second reason was the it represented the Gato-class of submarines that were constructed at the Manitowoc shipyards (even though this vessel was constructed at a different location). Gato-class submarines were one of the great industrial achievements of the Second World War. Twenty-five of these submarines built in Manitowoc saw battle and sank 132 ships with over 488,000 tons destroyed. All of these submarines suffered some damage but most of them have survived. The USS Cobia is one of the survivors that still remains in excellent condition. On August 23, 1970, the USS Cobia was dedicated as an International Memorial to submariners throughout the world. The United States, Germany, Greece, Israel, Italy, Spain, Sweden, Turkey, and the United Kingdom all participated in this memorial.

The USS Cobia is a major exhibit for the Wisconsin Maritime Museum, so since 1970, it undergoes routine maintenance as long as the personnel and financial resources are available. It requires many man-hours to maintain and restore this vessel. Russell Booth, a recognized authority on historic submarine restoration, inspected the USS Cobia in 1990. Booth had a big plan for the long-term preservation and rehabilitation of the Cobia. The first step of this plan was completed in 1996 with the dry-docking in Sturgeon Bay. In this part of the plan, the hull was restored which allowed the Museum to focus on restoring the interior of the vessel later on. After the dry dock was completed, the staff and many volunteers focused on interior projects that would return it to how it would have been during its peak of World War II. The Wisconsin DOT awarded the museum a grant in 1998 from the Statewide Transportation Enhancement Program (STEP). This grant helped with the interior restoration including the installation of bunks, metal trim, crew lockers, and flooring, all from World War II.

The best way to preserve machinery is by restoring it and operating it. That’s exactly what the volunteers did. They spent many years of researching the engines and electrical equipment, cleaned and repaired it, and some of the submarine’s systems have become active again. Two of the specific projects that they worked on were the installation of a DC power drive on the submarine and the rebuilding of two engines. Another thing that has been restored is the Cobia’s SJ-1 radar, which is, quite possibly, the oldest operational radar in the world. The volunteers that work on the USS Cobia continue to maintain the radios, periscopes, engines 1 and 2, whistle, and more.

The Wisconsin Maritime Museum allows people to go inside it and take a tour of this amazing vessel as well as being able to spend a night aboard the USS Cobia. The museum hosts three different types of tours throughout certain days of the week. The first tour is the “Life at Sea” tour where you get to spend about an hour during July or August on the ship learning about the crew, living conditions, food and downtime, battle stories, accidents on board the vessel, and prisoners of war. This tour is for anyone who wants to hear of about stories and less about the technological aspects of submarines. The second tour is the “Cobia After Hours” tour for adults over 21 only. It takes place on certain Thursdays of the month and is limited to a certain amount of people. This tour focuses on detailed events, the loss of Ralph Huston Jr., and comical moments on the Cobia. When the tour is over, the participants enjoy a free “Torpedo Juice cocktail” and also may purchase other drinks as well.

The third tour is called the “Nook & Cranny” tour where you get a behind-the-scene look at the submarine. They last approximately two to three hours where guests will get a chance to see areas of the submarine not seen by the regular tours. A bottle of non-alcoholic “Torpedo Juice” is included for a mid-tour break in the Crew’s Mess. Lastly, the Wisconsin Maritime Museum offers an opportunity to get a taste of submarine life from first hand experience. Boy scouts have the opportunity to earn their “American Heritage Merit Badge” and girl scouts can earn their “Local Lore Badge.” The participants of the overnight program will receive a guided tour and undertake educational activities along with viewing some non-public areas of the submarine.