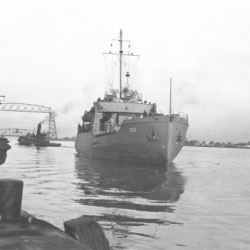 The Duluth harbor played a key role in World War II. With our declaration of war in 1941 after Pearl Harbor, President Roosevelt declared that the United States must “overwhelm” the Axis powers in munitions and ships. This started the shipbuilding program. Duluth was only one of the many harbors from coast to coast to produce ships for the government during World War II. With the strategic location of Lake Superior, the Twin Ports produced over 230 cargo vessels(Weisner) for the war effort, thus making a large difference for the navy.

Having a strong Navy would be the most important role for the United States to be able to sustain a war with two fronts, the Pacific and European. The combat role for ships is what most people only recognize during the war. Even though naval combat was a critical part to winning the Pacific Theater, victory would not have been possible without the support of cargo and transport ships. Most people never realize the role of these ships during the war. Cargo and supply ships brought new equipment, troops, food, water, and every other essential part in sustaining troops to victory. Unfortunately, the crews for these ships were mostly thankless for their duties, as were the men who were building these ships 24/7 in shipyards.

After Pearl Harbor and our declaration of war, President Roosevelt wanted to increase the navy with 18 million tons of merchant ships. (Shipbuilding History) Most ships were planned to be produced by shipbuilders on the coast, but with Roosevelt’s goal for production, any location that provided a place to produce ships had to be considered. Even though Duluth is located in the Midwest with no boarder to the seas it could still produce ocean-going vessels. Duluth had a history with war production. The Twin Ports had produced over 100 ships for the World War I effort. After the Depression hit, Duluth shipbuilding came to a stop. With the entrance into the new war it gave the gloomy city a chance to shine again. Once ship building was in full production in late 1942 the demand for workers was so high companies were driving hours away from Duluth to pick up motivated workers. (Kenny, 117) Ship yards would even attempt to hire workers from every edge of the country, a work advertisement for a Duluth yard was found in a newspaper all the way from Salt Lake City, Utah. (The Desert News) There were over 14,000 full time workers for more than six yards within the Twin Ports. (Weisner) Most locals would work part time for yards, many people would go straight to the yard after a full day’s work to put in a few hours before resting.

The key yard company in the Twin Ports was Walter Butler Shipbuilders, which produced almost half of the total ships within the Superior and Duluth harbors. Robert Butler started his shipbuilding company, Walter Butler Shipbuilders Inc., with the creation of the emergency shipbuilding program. His idea was to produce ships quickly and efficiently. He took over a previous shipyard in the Duluth Harbor and had his first launch in late 1942. Butler’s personal quota was a minimum of four ships per month. This company alone was responsible for hiring over 4,200 employees and the weekly pay role was over $400,000 to the men and women. (Ships for Victory) Butler’s launches were held as a community events. He would have ceremonies with a chorus and a local representative would give a speech. This was done as a way to pay respect and acknowledge how the little Midwest city of Duluth was doing good for the war. The ceremony was kept short because as soon as a ship was launched, the keel for the next ship was laid the same day. Globe Shipbuilders, a competing shipyard in the Twin Ports, held the record for the fastest assembly of a ship. (Ostrom, 58) The record time was in 23 days, the slogan was “speed and more speed”. Walter Butler shipbuilders and many other yards closed shortly after the war in 1945. Now the Walter butler shipyard is a modern day marina.

A famous event for the coalition and friendship between countries was held in the Twin Ports. It was known as the Quint Fleet, held by Walter Butler Shipbuilders, and was formed to strengthen the bond between the United States and Canada. This event started off with a set of quintuplets born in Canada. Mrs. Dionne was the first recorded women giving a successful birth of five children at once in 1934. (Chicago Daily Tribune) In 1943 Walter Butler produced five identical cargo ships and planned to launch them all in one day. No other shipyard had done that before. Launching and christening a vessel is a ritual hundreds of years old. Christening a ship involves a woman breaking a bottle of champagne over the ship before launch. It is for good luck and blessing of the ship and crew, christening is not taken lightly. Walter Butler invited the blessed Dionne family to christen his ships, one by each daughter. Not only was this done for in hope to pass the quintuplets luck in their successful birth to the launching of his five ships but also to boost morale and international relationships during the darkness of war. Each ship was christened by a bottle of border water from Niagara Falls, in symbol of the bond in friendship between the two great nations. This event was recognized by the Chairman of U.S. Maritime Commission, E. S. Land, who personally wrote Walter Butler Shipbuilders “The participation by these young ladies may be accepted as evidence that the people of the Dominion of Canada share with the citizens of the United States the pride which the great production record of American shipbuilders has inspired. Both management and labor in your shipyard have cooperated in making your contribution towards the greatest shipbuilding record of all time.” (Ships for Victory) This event was noticed and put on the front page of the Chicago Daily Tribune on February 12, 1943. (Chicago Daily Tribune) The ships were appropriately named after the set of quintuplets Marie, Emelie, Cecile, Annette, and Yvette. After the launching the ships, they were given to Great Brittan under the Lend-Lease program.

No combat vessels were produced in the Twin Ports. The yards focused on cargo and tanker ships. They were small, nimble, and built for speed compared to the rest of the navy’s fleet. The major reason this type of ship was produced in Duluth was because of location, restrictions, and previous experience. (Ostrom) The ships produced were not very different from the “lakers” or the Great Lakes cargo ships previously constructed by the yards. That meant almost every piece of equipment to produce the cargo ships was already on hand at the yards and also meant less training for many of current shipbuilders. The problem was getting the vessels to the oceans. Though possible, Duluth is over 2,038 nautical miles to the Atlantic Ocean, around 8.5 days to cover. (Ships for Victory) A ship built on the coast would already be half way to Europe or in the Panama Canal to the Pacific, which ate up a critical time. There was also a size limitation. There were multiple canals that had to be traversed through connecting some of the Great Lakes. The canals put a restriction on width, length, and depth. With the few setbacks the Twin Ports still was crucial for the war effort.

Without a doubt the Twin Ports shipbuilding put an effective dent in the ship production and the success in the Allied war effort. The emergency shipbuilding program brought an un-filled demand in labor reaching for coast to coast. It brought the badly damaged cities of Duluth and Superior out of the crippling depression. Even though its location all the way in the Midwest, ships were able to be migrated out to the oceans thanks to multiple canals through the Great Lakes. Even though no ships were ever made for combat roles the cargo ships produced were the silent and thankless vessels that were able to provide equipment and supplies to the men fighting on both fronts. The small city was able to create an event noticed nationwide to remind the two great counties of United States and Canada of their undeniable alliance in their effort to end the war. The Twin Ports located in the Northern Midwest, answered the call to serve in the protection of the United States of America.