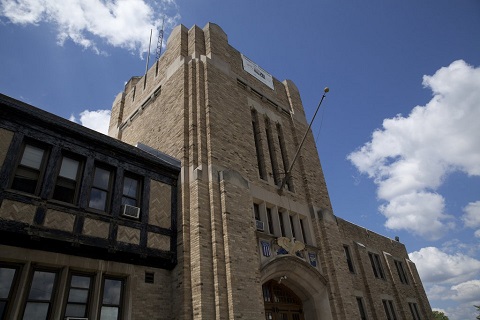 The Origins and Roles of the Michigan Flint Armory Base

The old National Guard Armory of Flint MI and home to the Bravo 125th Battalion; This classic armory serves many important roles throughout our history but the focus of this is to tell the stories of its origins, roles it played and the architectural designs behind it!

Let me describe the building’s image to you with as much detail as I can, since finding archived pictures of this is rather difficult. The building’s structure can be described as an old castle or an impervious bunker. Ridged hardened stone make up the tall walls with a flat square roofs that can be used to overlook the grounds. The building itself has many old-fashioned chimney stacks rising from the roof tops positioned all around it noting just the sheer size of it to onlookers. There are many narrow window slots located on the walls where they used to be iron-barred to keep debris or intruders from entering and was not viewed as a friendly site. It much looked like a riot proofed prison, keeping both sides from leaving or entering. It was quickly removed however, the reasons to the combinations of the designs integrated into this building was due to the timeline when it was approved to be constructed. World War 2 was either on the verge of wrapping up or over. The country having just been through a depression and the sit down strikes that occurred before the time of construction was a very tense time with the National Guard and the citizens. A picture below describes it more precisely than words will do. It was taken when the soldiers were returning home from the sit down strikes and it has the look of infantry men returning from war. [3]

The severe weather reports across the country and the devastation it was having played a role  in the architecture as well. It’s understandable for the gloomy features this building had but they also helped play a role in Flint’s history.  Now a day’s it has been remodeled to fit into our society and because it was severally needing a face lift due to the age and beating the building took. Now, it’s not as intimidating as it was decades ago.

One of the many roles of the army base served was not just being a bomb/fallout shelter but as a disaster recovery zone. The construction of the base was at the period of when the Cold War and arms race was in full tilt. It pretty much defined the aging 80+ year-old building. It was built to last essentially and playing into that role of being was it surviving one of Michigan’s worst natural disasters to this date and helped to serve as a safe zone during the 1953 Beecher Tornado. It was the Flints National Guard’s second time they had been mobilized since WWII. The first occasion being when the floods of 1947 were occurring. In which it also served to be vital of rescue operations. [1] During all of this, the Korean War has just fired up and operations were left into the hands of the local authorities of the Beecher tornado, as the troops were mobilizing to go over into Korea on two summer deployments, one in 1952 and last one in 1953. As a note, there is no active deployments or mobilizations during the period of the Vietnam War.

Above you can see how much devastation the Beecher tornado had on the city of Flint. Its’ hospitals were so over run and flooded with many wounded and dead that the Flint Armory was set up as a temporary morgue to help the hospitals make room for the more wounded that continued to pour in. [5] Serving as a makeshift morgue had many sociological effects on the men stationed there that it haunts the past with numerous ghost stories, even to this day.

More recently the Flint’s National Guard Armory was the first to get the call to be mobilized following 9/11. They were disaster recovery and not part of the search and rescue operations. The war on terrorism has left this army base in active service until recently of late. Being relocated due to the age of the facility, it was beginning to become a negative impact on its operations. Shortly after 9/11 they were deployed to Iraq, then to Afghanistan and finally back home which all took part being of the national resolution campaigns. [1]. The point about the Flint armory base being seeded here is that it served to the people more than any operation. [4, 6]. Even though there was a lot of activity and mobilization during the time periods, it still provided aid to the many that needed it when the time came. It’s such a part of people’s lives that we don’t think of it and we just know it’s always there, waiting to serve its purpose in whatever means is necessary. For example, Flint’s citizens were not expecting to see National Guard troops handing out cases of water with the Red Cross and State police troops to help bring resources needed to the city. On top of that, they even served water distributions sites throughout Flint and were also going above the call of duty to deliver it to door steps of the people. Why you might ask? Because it is just one big family, helping each other out when you need them the most.