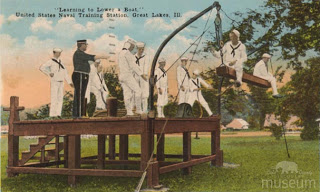 The current home for Naval basic training is located thousands of miles away from any ocean. Nestled on a peaceful little piece of shore along the expansive Lake Michigan, this Naval Base is the heart of u.s. naval training. every enlisted man and woman must pass through her halls, sit in her classrooms, and endure her simulators for one reason: to prepare them for the challenges that lie ahead.

where it all began

Before the founding of a centralized training center, naval training was done shipboard. If a recruit was drafted during the time of war or volunteered during peace, the sailor was sent to his ship where he learned all the skills needed for his job. which often included knots, ship maintenance, and how to operate a cannon.

While this worked for the longest time, at the turn of the 1900’s, the time for change had come. The rapid increase in complexity and sheer size of naval vessels, which as a result, larger crews were needed, a standard of training was needed. a way to make sure that all sailors, whether they were destined to man the helm, man the engine room, or to man the guns, would have a uniform knowledge of the ships they are charged with protecting so that they may carry out their orders to the best of their abilities.

The current Naval Station was constructed on land donated in 1909 by the Merchants Club of Chicago. It is believed that the donation may have been sparked in part in a wave of nationalism following the Spanish-American War and the victories at sea and on land against a major European power.  The training center quickly soared into use as America prepared to enter World War One. After it was obvious we would be getting involved, The base was expanded to be able to train up to 10,000 recruits at a time, all in various stages of their training. from there the base remained in operation of its primary task until 1929.

After the crash of the stock market, naval training quotas quickly decreased. This was because too many men were trying to join the navy in order to feed themselves and families. This trend hit an all-time-low from 1932 to the end of 1935 where all training was ceased completely as a surplus of men was created. By the start of 1936 however, enough men had left the navy that training had to resume. even then it was kept at minimal levels of roughly 2,000-3,000 men a year.

Everything changed once Japan hit Pearl Harbor. within a month the Department of the Navy announced a $3 million overhaul and expansion project for the training facilities. This improvement increased the number of recruits training at a single time from 10,000 to 45,000. and even then this capacity was surpassed as by the end of 1942, there were 75,000 recruits reported on base. By the end of the war it is documented that from 1939 to the middle of 1945, over 1 million recruits passed through Naval Station Great Lakes. While not all were in basic, they did still attend some form of school at one of the base’s many schools. This was equivalent to one-third of the naval manpower used in the war. The rest was from men already in service, or from civilian contractors such as the merchant marine.

Though the number of recruits trained every year has shrunk since World War 2, Naval Station Great Lakes is still the home of all basic training for the U.S. Navy. on average every year, the training centers turn out 16,000 sailors. Naval Station great Lakes also does advanced training such as electrical, turbine, and machinery related jobs. The base also supports many advanced schools such as navy dive and salvage, and special operations explosive ordinance school. All this schooling is to prepare them to better serve their ship, crew-mates, and country and to train them to handle all the challenges all three will bestow upon them.

Some more recent changes to the base include a recent addition. In 2007, a brand new, $83 million simulator was constructed. This is an actual replica of the bowels of a modern guided missile cruiser. Once the recruits step inside the simulator, they run into a storm of raging fires, flooding, and mass casualty rescue, all to prepare them for the challenges ahead on the ocean blue.