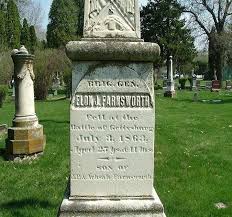 One of the greatest tragedies of the Civil War is the unnecessarily wasted life of Elon John Farnsworth and the lives of his men at the Battle of Gettysburg July 3rd, 1863. General Farnsworth was given the orders to lead a suicidal charge by General Kilpatrick and initially protested them. However, once realizing it was his duty he bravely led a cavalry charge into confederate lines and was killed . It is unfortunate that such an act of bravery has gone largely unnoticed as Elon John Farnsworth is “the only Union general officer to fall on the field at Gettysburg who does not have a monument of some sort to him on the battlefield.” (Wittenberg, 2015).

Brigadier General Elon John Farnsworth was born in Green Oak, Michigan. He attended the University of Michigan however there are conflicting reports on whether or not he graduated. Some sources claim that he graduated in 1858 however, a fairly infamous story about him being expelled exists. During a rowdy party, an accident occurred in which Farnsworth was involved where a student fell off the roof of the house and died. This incident may even be a contributing factor in Farnsworth’s decision to join the military. “This account indicates that “Two years later, the University was shocked by the news of a wretched carousal in which this young man was a leading spirit. One of the students lay dead at the coroner’s rooms. Eight students were expelled, among them this man. On leaving the University he went to [Dr. Andrew D.] White [professor of history] and thanked him for what he had done for him, acknowledged the justice of the actions of the faculty, but expressed the hope that he would yet show that he could make a man of himself. Five years later that student fell at the head of his brigade at Gettysburg. It was Farnsworth. He made good his promise.” There is no verification of this story available, other than this account.” (Wittenberg).

After Farnsworth was expelled from college, he traveled west to the Utah Territory where he became a civilian forage master at Utah’s Camp Floyd.”Love for adventure frequently led him to make long journeys through the mountains on horseback, and it was there, doubtless, that he gained such a knowledge and mastery of the horse” (Chicago Tribune, 1863). When the Civil War erupted, he went to Illinois and joined the 8th Illinois Cavalry. His uncle John F. Farnsworth was an influential politician and is most likely the reason Elon was promoted to first lieutenant and put in charge of company K. Farnsworth was well liked by his men, and observed to be “courage incarnate but full of tender regard for [the] men” (Petruzzi).

His military career is interesting in that he rose to the rank of brigadier general quickly without any West Point education. Under the command of Alfred Pleasington, he was assigned as to be an aid along with George Custer of Little Bighorn fame. After the Battle of Chancellorsville, he was promoted brigadier general and became the commander of the 1st Brigade, 3rd Division, Cavalry Corps, Army of the Potomac. He gained this promotion due to his performance at the Battle of Chancellorsville although there is strong evidence that this is not the only thing that got him the promotion. The evidence is present in a letter he wrote to his politician uncle in which he says “The general speaks of recommending me for Brig[adier General]. I do not know that I ought to mention it for fear that you will call me an aspiring youth. I am satisfied to serve through this war in the line in my regt as a Capt on Genl Pleasonton’s staff. But if I can do any good anywhere else of course “small favors &c.” Now try and take this into the President, and you can do an immeasurable good.” Shortly after this letter was written Farnsworth would be put in charge of a brigade of cavalry under General Hugh Kilpatrick. (Petruzzi).

After Pickett’s charge at the Battle of Gettysburg, Farnsworth was given the order to charge on the position of Law’s brigade at roundtop. This order called by Meade was an attempt at creating a diversion so that Lee’s plans would be disclosed. However, all Farnsworth’s charge accomplished was the decimation of his regiment. Farnsworth knew that the charge was certain death and very loudly protested the order at first. The ground that Kilpatrick ordered Farnsworth to charge was heavily wooded and full of large boulders. These features made a successful Cavalry charge near impossible. A man named Henry C Parsons who served under Farnsworth recounted the moment Farnsworth was given the order. “In a moment, Farnsworth rode up. Kilpatrick impetuously repeated the order. Farnsworth, who was a tall man with military bearing, received the order in silence. It was repeated. Farnsworth spoke with emotion: ‘General, do you mean it? Shall I throw my handful of men over rough ground, through timber, against a brigade of infantry?’” Kilpatrick angrily responded “Do you refuse to obey my orders? If you are afraid to lead the charge, I will lead it.” Once Farnsworth honor was called into question he accepted the orders but said “General, if you order the charge I will lead it, but you must take the awful responsibility.” according to Parsons (Legion). The story goes that the argument was so loud that the confederate infantry at the bottom of the hill could hear it and prepared for Farnsworth’s charge. (Petruzzi). Farnsworth broke through the initial line of infantry but was later killed from a volley fired by the 15th Alabama, William C. Oates was part of the 15th Alabama and recalled the moment when a Confederate soldier approached the mortally wounded Farnsworth “ He approached the dying Yankee, telling him, “Now, you surrender,” figuring he had little choice in the matter, anyway. There were two different versions among the men as to what happened next. Oates said that the Yankee swore he would not surrender, and he turned his own pistol towards himself and pulled the trigger. Another story among the man said that he killed a Confederate who demanded his surrender and was shot by another.” (Desjardin). Farnsworth remains as the only federal officer of general rank to be killed behind enemy lines in the Civil War. (Petruzzi).

Elon Farnsworth is remembered as “Brave and daring to a fault” (Chicago Tribune, 1863). It is always said that he cared very deeply for his men and was well respected by the soldiers that fought for him. This explains the protest by him as he in his men were sent to certain death at the Battle of Gettysburg. He was also famous amongst the Union soldiers and Infamous with the Confederates. He and his colleagues (Custer and Merrit) were known as the “Boy Generals” and although he was young, he was certainly a good leader. “So intrepid was he in his attacks, and so watchful in his movements, that his name became terror to every bushwacker along the lines” (Chicago Tribune, 1863).

Brigadier General Elon John Farnsworth is an interesting person in history because despite his incredible bravery, he is largely forgotten. Pickett’s charge is remembered at Gettysburg for the bravery of the men who carried out the suicidal order and yet Farnsworth charge is exactly the same situation and it is forgotten. It is a tragedy that Elon Farnsworth and his men are forgotten by history despite his unbelievable courage.