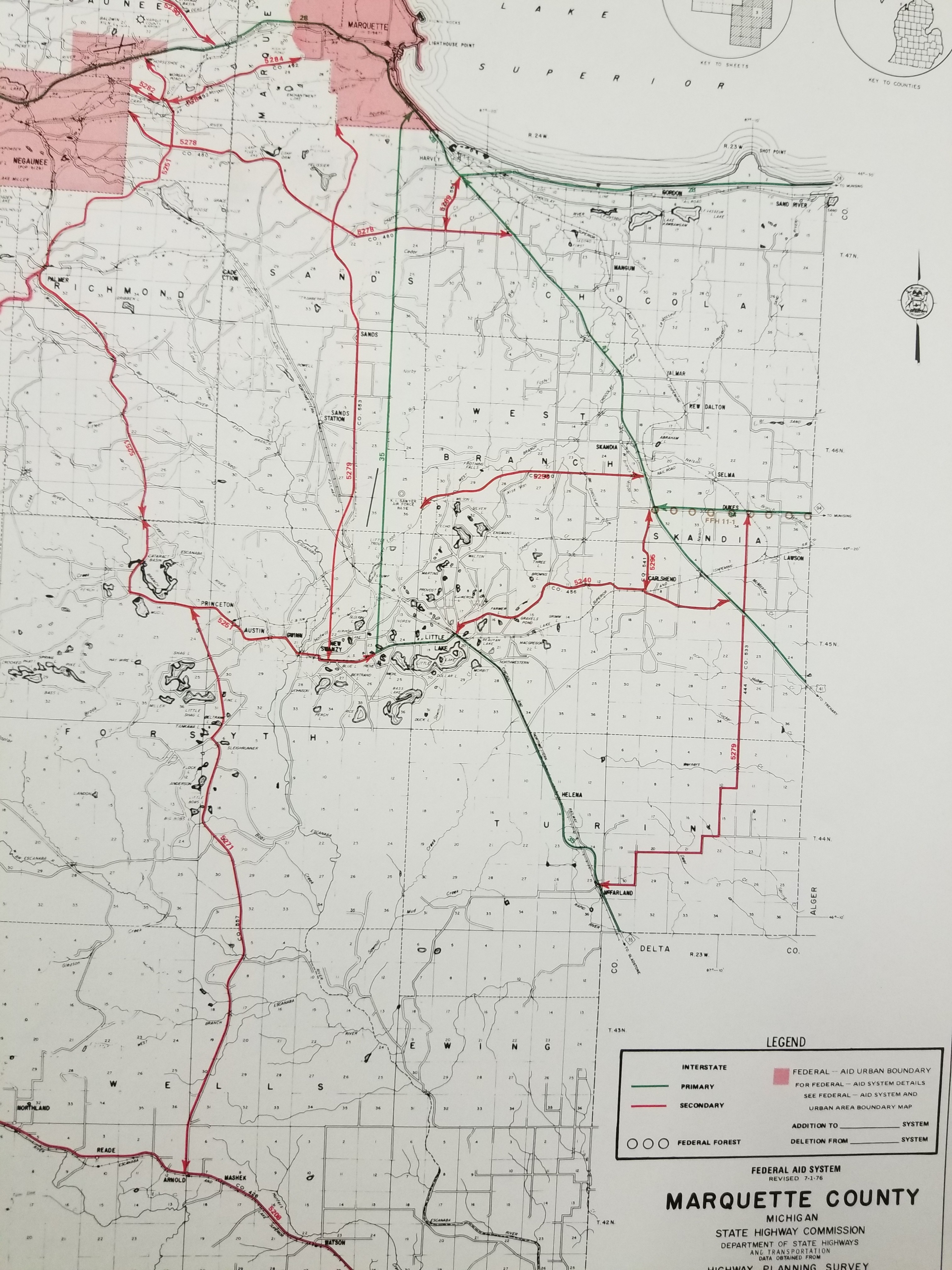 KI Renovations during the Cold War

County Road 460 was built in 1966 during the Cold War in order to give KI Sawyer an easier access route to highway U.S. 41. The highway went all the way up to Marquette before a primary road was reached that could give access to the Air Force base. With the creation of County Road 460 a primary road was put in place as a way for the Air Force to move troops, supplies, and equipment faster. This faster route saved the U.S. government time and money, which was imperative for them during the Cold War.

World War 2 just ended, the world had just spent many years fighting and witnessing atrocities that nobody has ever seen in warfare. This included nuclear bombs, the holocaust, and a generation of young men being pulled into a terrible situation. Everyone was looking at the end of the war hoping that there would be a time of rest, to rebuild and to be normal once again. However, this never happened as the world split into two new factions, the Eastern Bloc which consisted of the Soviet Union and their allied states, and the Western Bloc which was the United States and their allies (Matloff, 1971). This divide took this war torn world and caused further tension, a tension which today is called the Cold War.

The Cold War split apart the alliance of the Soviet Union and the United States after World War 2. This division came from a difference in ideology both economically and politically (LaFeber, 2006). The Communist faction of Russia worked hard to secure allies who would have similar thoughts to their own, they also tried to spread their influence to other countries to secure more support. While the United States, with their republic and capitalism, tried their best to stop the spread of communism (May, 1993). The Cold War can be best split into two phases. The first phase is the ramp up of arms and efforts to consolidate power, while the second phase is where both sides tried to make their own stable international system. In the first phase of the Cold War the Communist Russians or Union of Soviet Socialist Republics (USSR) worked to consolidate their power where they already had control and then tried to expand it outwards to other nations. At the same time, the United States Worked hard to contain and impede the USSR and their agenda (May, 1993). The United States did this by creating NATO, which helped out nations that the USSR wanted to control by providing the locals with both military and monetary aid (May, 1993). The first phase of the Cold War is where many of the major conflicts happened as well. The first of which was the Berlin Blockade, followed shortly by the Korean War. The USSR then worked to get influence in Latin America and former colonies of the Western Bloc which led to the Suez Crisis, Berlin Crisis, and Cuban Missile Crisis. Following these crises the Vietnam War broke out.

After the Vietnam War, the Western and Eastern Blocs worked to create a more stable international system. By this time however, the USSR was on the decline. It was economically collapsing on itself. The communist system that was in place met with many coups and revolutions that tried to dismantle their power. The USSR lost control of itself and as a result it was abolished, leaving the United States on top of the world.

K.I. Sawyer is an Air Force Base that is located to the south of Marquette, Michigan and North of Gwinn, Michigan. The airport was built in 1944 by Kenneth Ingalls Sawyer, who was a Civil Engineer and the Marquette County Road Commissioner during that time (Henry, 1995). He wished to make something that would help to develop Marquette County and this is what he came up with (Henry, 1995). One of the major factors of this project going through was the growing mining industry in the County and the travel needs that came along with it.

The U.S. Air Force took over the airfield on January 24, 1955 (Muller, 1989). They needed more bases for the expanding military forces that were required during the Cold War. This started with the U.S. government agreeing to lease the air base for 99 years. Following that the U.S. needed military supporting infrastructure to be added to the base which later included County Road 460. This construction of infrastructure brought many jobs to the area, as more than 800 people were employed in order to do this work. This later brought military jobs to the area too as 900 military personnel were stationed at the base which accounted for an annual income of over 3 million dollars or what would today be about 37.5 million dollars added to the local economy.

The base provided strategic protection of the Great Lakes during the Cold War. This was important because if something happened to the Soo Locks the entire Country would suffer as no shipments could be made through the Great Lakes. The mining in the area would also be stopped which would have major consequences for the area and as a result the United States would suffer as well. This base would operate for a total of forty years. In 1993 the Clinton administration recommended the base be shut down (Henry, 1995). By September of 1995 the base was closed, leaving the air field to be left to civilian matters only (Henry, 1995). As a result of the base closing down many of the locals started having very nostalgic feelings and hearts filled with sorrow. They miss the people that used to live in the area due to the air base and they also miss the economic advantages that the base brought along with it. K.I. Sawyer has become a husk of its former glory and the people that live locally often reminisce of the days of old.

The reason that County Road 460 was such an imperative and high profile project was due to the imposing threat of communism and the Cold War. During the time that this road was constructed, the Cold War was in full swing. Four years earlier the Cuban Missile Crisis was on the world stage where people held their breath as they waited to see if the world was going to be plunged into a nuclear war. This prompted the United States to make sure that they could move to any location they needed to in a short and efficient amount of time. Thus, projects like County Road 460 were built in order to let the Armed Forces have easier access to what they needed in this time of great turmoil.

K.I. Sawyer was an important military installation for the Air Force during the Cold War. It housed 7, 500 people according to a census taken in 1980. These people were not only the men who served the United States during the Cold War, but their families as well. The men involved in the war made sure that the U.S. was primed and ready to go at a moments notice, being vigilant and efficient with the use of their time. This need to be prepared at any moment also makes County Road 460 that much more important. This is because the access provided by this road trimmed many miles off of the original route, along with about an hour of travel time, saving the air force time, energy, and funds.