Wurtsmith AFB and its Contamination

The Wurtsmith Air Force Base, created in 1923, played a large role in WWII. The base is influential in Michigan, as well as the United States military history. It is one of the most famous bases located in our state. Most individuals are not educated on what the base did before and after World War II, what is currently happening at this location, or how the historical space is impacting the land and local citizens today. Located in Oscoda, Michigan this base is positioned no more than two miles off the shore of Lake Huron. Today, the Wurtsmith Air Force Base has a museum where you can learn about its history. There are many historical planes you can visit as well as other interesting pieces of history that the public may view.

Wurtsmith Air Force Base is said to have originally started with a fishing trip between two men. One of these men were named Lt. Ennis Whitehead. He saw the surrounding land and figured it would make a great place for a gunnery range. Lt. Ennis Whitehead was part of a unit at Selfridge Army Air Field. This air field was in dire need of a gunnery range because they being forced out of their gunnery range on Lake St. Clair. Lt. Ennis also thought it would be a great place for young Army Air corps to test aircraft (WAFB.net). He brought this idea to the attention of his squadron commander Major Carl Spaatz. This man later took the proposal to build a gunnery range to the people of Oscoda. After a devastating fire in Oscoda which cleared over 600 buildings, the remaining citizens heard about the proposal to clear an area for the base. They raised $600 to clear the land, which at the time was plenty for this job. This gave the Army operations the opportunity to begin creating the base we know today. The base was first named after Capt. Bert E. Skeel in 1924. Bert E. Skeel was a WWI pilot who died in an air race in Ohio. It remained named Camp Skeel until 1942 when it was renamed Oscoda Army Air Field (WAFB.net).

In 1942, three 5000’x150’ concrete runways were built. The runways were aligned NE/SW, E/W, and NW/SE. At this time, the camp was renamed and the airfield was under III Fighter Command jurisdiction. The main mission of Oscoda Army Air Field, at the time, was to defend Sault Ste. Marie and the straights of Mackinac. The base was put into a standby status to be there just in case something happened in those areas. In March of 1943, the Third Air Force reactivated the field for training of black aviators. A short time later in July 1944 it was being used to train Free French Air Force pilots, which eventually led to more and more training and more and more storage of aircraft like the B-52G (oscairport.com).

Fast forward to 1992, with the dissolution of the Soviet Union, the US Air Force inactivated Strategic Air Command. This lead to Wurtsmith transferring to Air Combat Command control, and then on June 30th 1993, Wurtsmith Air Force Base closed.

After all of that great history, the Wurtsmith Air Force Base is still standing as a place that is visited by a plethora of people. As previously stated, there is a museum open to the public which has artifacts and information on the base’s history. There is a lot of open runways still today that can be rented out for a multitude of events. One example of this is autocross racing.

Although in the past the Wurtsmith Air Force Base was extremely successful there are some prevalent issues with it today. It has recently been discovered that that the base has been leaking chemicals into the surrounding waterways. These contaminants are harmful to the environment. One specific and important waterway being affected by these pollutants is the Au Sable River. Many tests have been done to see the extent to which the contamination is harming the citizens residing in the area. This is extremely important because harsh chemicals can negatively impact the future of children and infants as well as the elderly. According to the Michigan Department of Environmental Quality, the private well located across the road from Oscoda High School tested about the 70 parts-per-trillion advisory level that was established for perfluorooctanoic acid (PFOA) and perfluorooctyl sulfonate (PFOS). These levels were published by the Enviromental Protection Agency (Mlive.com). These chemicals have been shown to cause problems with thyroid, liver, kidney, reproduction, and other health problems. 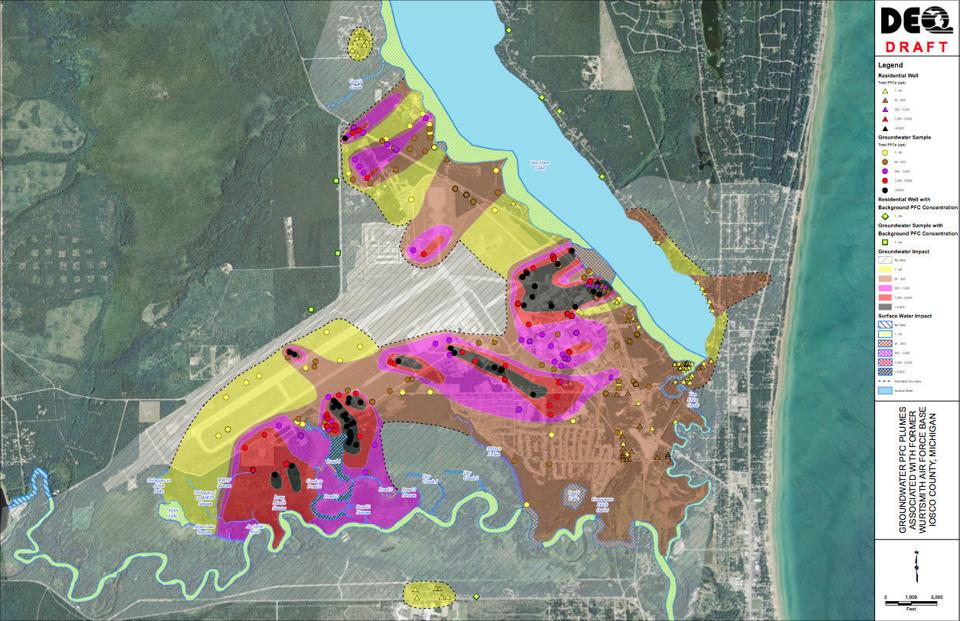 It has been discovered that the chemicals that are impacting the health of these local citizens are chemicals that come from the foam that fire fighters used to put out fires that were on the base. Even after the base closed in 1993, the base maintained a fire staff for many years. At one point, they had to use these toxic foam chemicals to put out a fire at the Oscoda High School in 1995. It has found from testing this area that some places to have over 1000 parts-per-trillion for PFOS and PFOA. One of these places included directly underneath the Oscoda high school.

There are many different ways that PFOA and PFOS can affect the human body. The average person has around 3 or 4 parts per billion of these chemicals present in their blood. Someone who works in a place that uses these chemicals and is exposed to them can have up to 100 parts per million, or 0.01%, in their blood. These high levels of PFOA elevate the risks of kidney cancer, mesothelioma, and diabetes. There is no amount of PFOA that is officially recognized as “harmful.” However, many studies have shown otherwise. High blood serum levels of PFOA are associated with infertility, decreased semen quality, and a higher risk of thyroid disease. PFOA exposure is also shown to be associated with increased risk of attention deficit hyperactivity disorder (ADHD) in children between ages 12-15. This is a very big issue for the people of Oscoda and the surrounding areas for obvious reasons. Having high amounts of this chemical directly underneath their high school could have serious long-term effects on the kids that attend school as well as the faculty. They are surely exposed to this chemical nearly every day, whether it be playing outside on the playground or from being exposed to the chemicals via drinking the water. Contaminated water has been shown to be the main way that humans get exposed to this chemical, which is exactly what’s going on in Oscoda. Their water table has been contaminated with high levels of PFOA because of the leakage of chemicals from Wurtsmith Air Force Base. The EPA began requiring public water systems to monitor for PFOA and PFOS in 2012, but even today there is no federal drinking water standards for PFOA or PFOS. People who are exposed every day for an extended period of time are the ones who start to see real problems, some of which I mentioned above. With this long list of negative effects it is clearly a big health issue for local residents. According to Robert Delaney, a Michigan Department of Environmental Quality specialist, “If you pull the water out of the ground in that training area, it still foams, there’s so much in there.” Since this entire problem stems from the fact that the foam used to extinguish fires on the base is what carried the toxic chemical, that goes to show just how invasive and problematic this contamination can be. Now that the contamination has reached the Au Sable river, it could potentially carry this contamination into Lake Huron. This would cause some big problems for the fish and other life that lives beneath the surface. The Au Sable River is an attraction for families all around Michigan. With that being said, these chemicals are going to be reaching a lot more people than just the Oscoda residents.  Even studies on fish have been done, where it was found that PFOA is a liver carcinogen in rainbow trout. 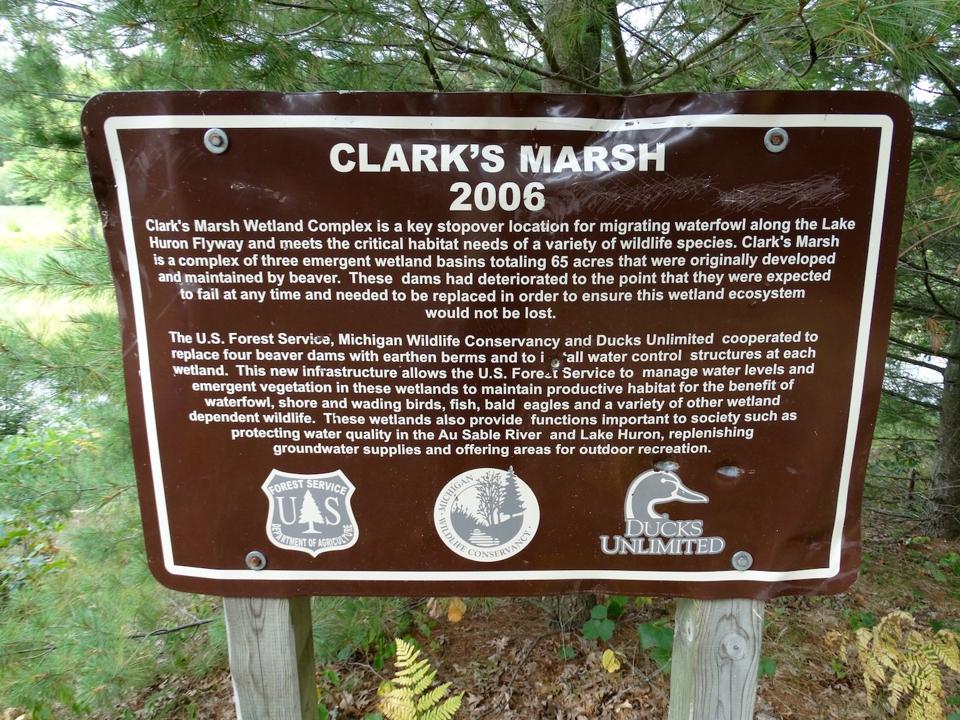 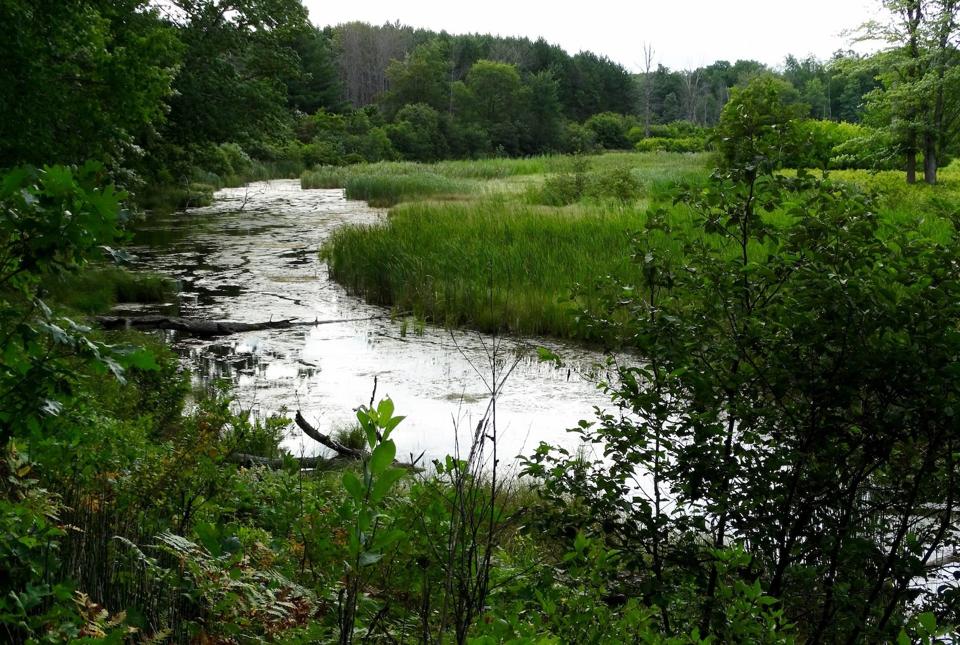 There are many people who were exposed to the Wurtsmith water that are now coming out and blaming the chemical filled drinking water for their health problems. Traci Kroushour, an Oscoda resident until the age of 12, had her uterus removed at the age of 28 and can never have children. She also has many other irregular health problems including bone death, fibromyalgia, irregular heartbeat, gastrointestinal problems, and underdeveloped reproductive organs. More individuals impacted by these chemicals are Cindi and Lawrence Ashbeck. They were stationed at the air base from 1986 to 1993. Cindi developed hypertension and Lawrence diagnosed with lung disease. Their children developed asthma, spinal defects and thyroid problems. In 1979, the state of Michigan sued the Air Force for the contamination. The Air Force knew about the contamination and spent millions since 1977 to try to cover up the problem by adding phosphates to mask the odor of the chemical in the water. Neither Michigan nor any U.S. officials have conducted a comprehensive study on the contaminants and pollutants under the base.