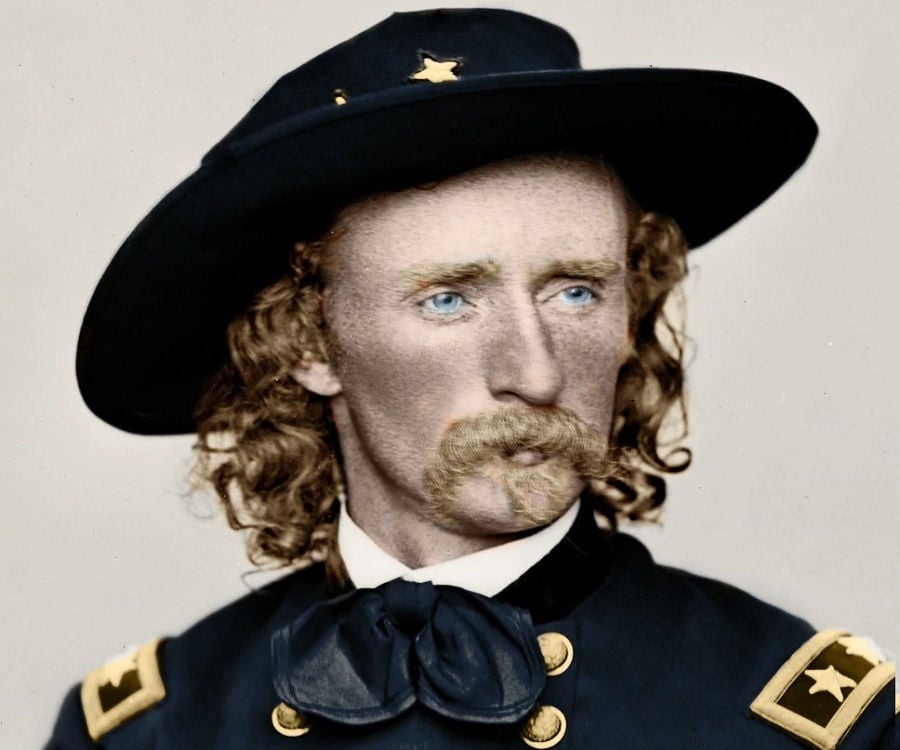 This is a biography on General George Armstrong Custer, a union general who was known for his bravery and valor in battle but who ended his life and his career in controversy. Custer served in the American Civil War as part of the Michigan Cavalry Brigade and participated in many Civil War battles during his time in the Cavalry. Custer also played an important part in the American Indian Wars following the Civil War. During the divisive Battle of Little Bighorn, Custer died in battle on June 25th, 1876 at only 36 years of age.

George Custer was born on December 5th, 1839 in New Rumley, Ohio [American Battlefield Trust, 2019]. Custer was one of 4 siblings born to Emanuel Custer and Maria Ward who were farmers [Utely, 2019]. “Reared in the rough-and-tumble environment of a large, rural family, “Autie” [Custer’s nickname growing up] was a strapping, energetic youth who enjoyed hunting, fishing, and practical jokes” [Utely, 2019]. Custer was known for being mischievous and sometimes got himself in trouble with authority in the process but was always a favorite among his friends. Although he was born in Ohio, Custer actually spent much of his youth in Monroe, Michigan with some close relatives to attend McNeely Normal School [American Battlefield Trust, 2019]. Because he spent much of his youth in Monroe, Custer came to view Michigan as his second home.

After graduating from McNeely Normal School, Custer obtained a teaching certificate to instruct grammar school [National Park Service, 2019]. Custer didn’t immediately apply to West Point but served as a teacher for two years. Teaching, however, was not Custer’s calling as he soon grew bored of teaching and looked elsewhere for work. Custer applied at the U.S. Military Academy, West Point in New York where tt didn’t take long for him to be accepted [National Park Service, 2019]. Custer entered West Point in 1857 and graduated in 1861 four years later at the bottom of his class [Utely, 2019]. Custer brought the spunk and impotence he had while growing up to the Academy and in the process earned himself multiple demerits throughout his time there. While Custer was smart he hated studying outside of his classes and didn’t get along very well with the rigid structure that was West Point. Nonetheless, with all his demerits he still managed to graduate in 1861 and although he graduated 34 out of 34 in his graduating class, Custer didn’t have a problem getting assigned. This was mainly because the Civil War had just broken out and the U.S. needed trained generals. Custer, last of his class, still fit the bill. Custer chose cavalry as his branch of the army and was commissioned second lieutenant in the Second U.S. Cavalry where he got his first taste of battle mere days after graduation at the Battle of Bull Run in July 1861 [Utely, 2019].

The Battle of Bull Run in July 1861 was Custer’s first major engagement in the Civil War. Fresh out of graduation, Custer expressed the chaos and confusion that occurred in the Union forces during the Battle of Bull Run upon finding out that the Confederates had flanked them. “The Union lines, but a moment before so successful and triumphant, threw down their arms, were seized by a panic, and began a most disordered flight…officers and men, joined in one vast crowd, abandoning, except in isolated instances, all attempts to preserve their organizations.” [pp.70 Whittaker, 1889]. Although the confederates won the Battle of Bull Run, Custer was still commended and celebrated for maintaining his composure and bravery throughout the battle while most of his colleagues and officers fled in a wild retreat.

General Custer was an incredibly brave, courageous leader with the plucky, smart attitude he brought with him from childhood and the men he commanded applauded him for that. While at first hesitant on whether or not to trust their new general, his men soon noticed that he wasn’t afraid to fight alongside them as if he were one of them. This earned their respect and commendation. Rather than commanding his troops from the rear, General Custer commanded his troops from the front. In fact, at one point “he extended so far ahead of his own men that the enemy cut him off from the rest of his command. [NPS, 2019]” Some could argue this was admirable and brave, others reckless and irresponsible. Still, Custer got results on the battlefield and this earned him recognition from not only his men but also other officers in the military. Because of this plucky and daring attitude, Custer gained the attention of high ranking officers such as General George B. McClellan. In part because he was associated with high ranking generals, George Custer continually rose through the ranks in the two years since the Civil War broke out until he was Brigadier General George Custer who commanded the Michigan Cavalry Brigade [NPS, 2019].

Not long after being promoted to Brigadier General, Custer went to fight at the Battle of Gettysburg as commander of the Michigan Cavalry Brigade where he made a notable debut. On July 3rd, Confederate forces under General George Pickett were planning an attack on the center of the Union lines while a 6,000 man force led by “Jeb” Stuart was prepared to simultaneously strike the Union rear [Hatch, 2010]. General Custer was assigned the task of defending the Union rear against Stuart’s forces and even while up against a 6,000 man strong Confederate force, General Custer and his men put up an invincible fight and were able to push Stuart’s superior force back. General Custer spoke highly of the men he commanded saying, “I cannot find language to express my high appreciation of the gallantry and daring displayed by the officers and men of the First Michigan Cavalry. They advanced to the charge of a vastly superior force with as much order and precision as if going upon parade; and I challenge the annals of warfare to produce a more brilliant or successful charge of cavalry than the one just recounted [pp. 178 Whittaker, 1889].” Custer had remarkable valor in battle and was often praised for it but was always certain to commend his own men and their courage and accomplishments.

General George Custer continued to add to his renown in the final campaigns of the Civil War, where almost every campaign and battle he undertook he came away victorious, driving off the Confederate forces in a series of conquests. These included the battle at the “Dinwiddie Court House and Five Forks and in the pursuit of Robert E. Lee’s army from Petersburg to Appomattox where Custer and the Third Division won a string of victories and finally, at Appomattox Station, blocked the further retreat of the Confederate army [Utely, 2019].” After the battle at Appomattox Station, Custer pronounced that “during the brief period of ten days my command captured in open battle 46 pieces of artillery and 37 battle-flags. This is of itself the best evidence I could wish to offer of the gallantry and heroism displayed by this division [ pp. 64 Carroll, 1977].” Custer and his men undeniably earned the victory. The battle at Appomattox Station ended Lee’s hopes of getting food and supplies to his confederate army and undoubtedly had an influence in Lee’s decision to meet with the Union General Grant the next day [American Battlefield Trust, 2019]. After the battle at Appomattox station, Lee surrendered and the Civil War was finally over.

After the Civil War ended, General Custer served an important part in the American Indian wars of the Midwest where he again made his name known in the region for his bravery, heroism, and boldness in battle. Some of the major battles he participated in were “General Winfield S. Hancock’s campaign of 1867 against the Cheyennes in Kansas, the battle of the Washita in November 1868, the Yellowstone Expedition, which guarded surveyors of the Northern Pacific Railroad, and two more victories against the Sioux which added luster to his name…thus by 1875 Custer was widely admired as the nation’s foremost Indian fighter [Utely, 2019].” General Custer was a man of action and didn’t deem sitting back and letting the fight come to him to be a good course of action. During the battle of the Washita, General Custer made it known that “the sooner a little activity [combat] was exhibited on our part the sooner perhaps might we be freed from the aggressions of the Indians [pp. 129  Custer, 1876].” It would seem at this point as if Custer would be remembered forever as a heroic cavalry general and leader, whose strategic moves were almost always correct and who had the boldness to act instantly and ferociously upon his instincts.

This all changed at Custer’s Last Stand. Custer’s Last Stand, also known as The Battle of Little Bighorn, is the battle where Custer and over 200 of his men died. This battle was the most controversial battle of Custer’s life and is the battle that would forever tarnish the reputation he had built up for himself. This one battle, the last Custer ever fought in, was a tragedy. “The disaster, a low point for the army in the Great Sioux War of 1876, occurred when the Seventh Cavalry attacked a large Sioux and Cheyenne encampment on Montana’s Little Bighorn River. Five companies under Custer’s immediate command, more than two hundred officers and troopers, were wiped out by nearly two thousand warriors defending their families [Utely, 2019].” The Battle of the Little Bighorn was one of the worst U.S. Army defeats in the American Indian wars while being one of most decisive Native American victories.

The significant defeat at the Battle of the Little Bighorn caused considerable controversy as some believed Custer was irresponsible and reckless leading into the Battle of Little Bighorn and whose careless actions caused the demise of not only Custer but over 200 of his men. If Custer had “been killed at Appomattox, he would be remembered as a great cavalry general…his tactical moves were nearly always correct and instantly executed. None excelled him in personal courage or individual battlefield combat [Utely, 2019].” Nonetheless, this was not the case and Custer will forever live on in history surrounded with controversy. One of the most praised generals and yet also one of the most hated generals. But surely one of the most remembered.

The Custer Story: The Life and Intimate Letters of General George A. Custer and His Wife Elizabeth (A book by George Armstrong Custer) can be found and purchased on Amazon