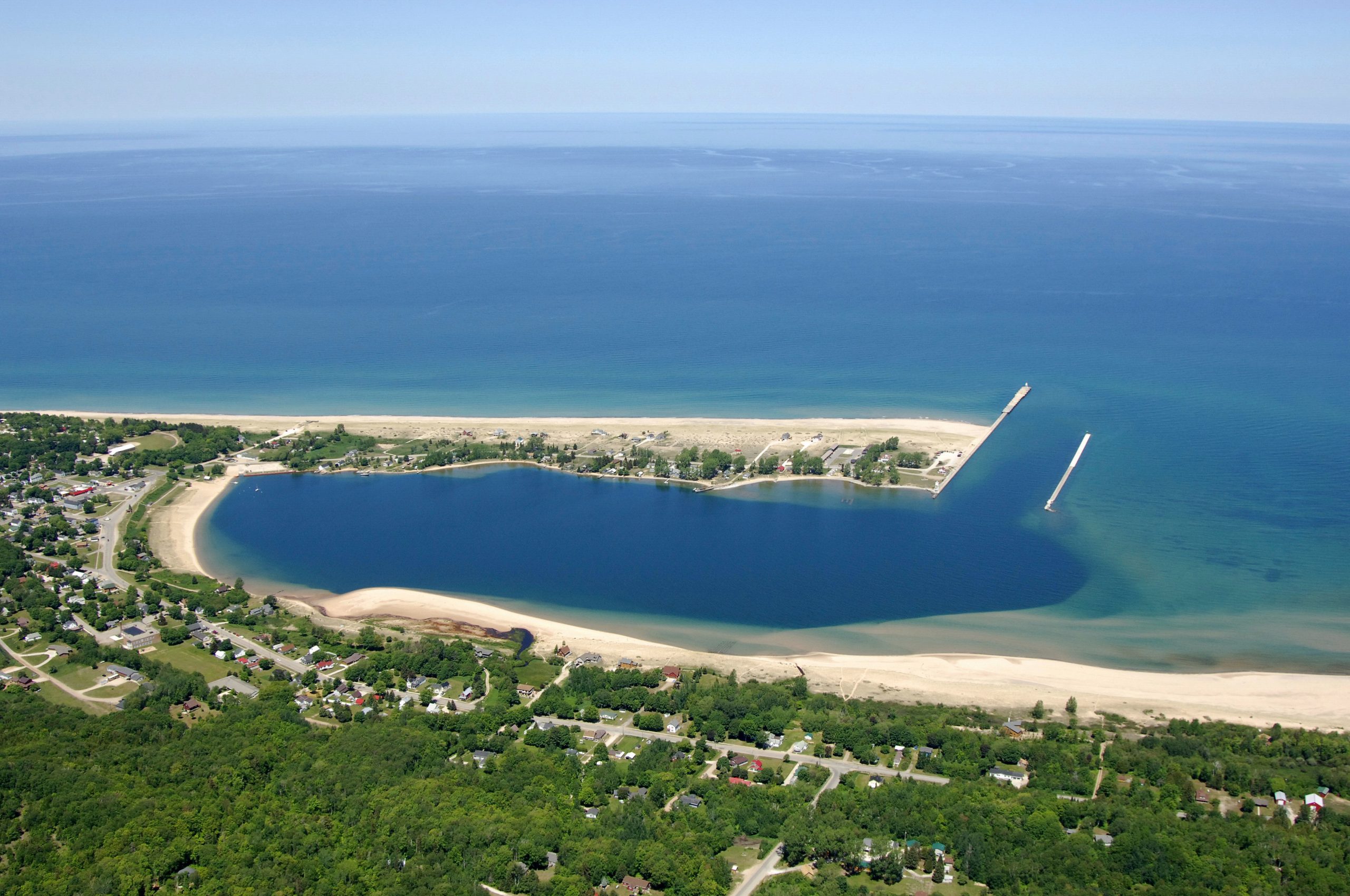 The Grand Marais Air Force Station briefly operated as a part of the ‘Priority Permanent System’ which was a strictly manned operation intended to alert the United States ‘Air Defense Command’ to potential bomber threats entering the United States air-space during the early years of Cold War tensions.

In a post-WWII United States, military officials that were previously acutely aware of the German V-1 and V-2 rocket capabilities, now instead turned their focus to the Soviet bomber threat. As the United States entered the Cold War, this became the new reality — the Russians had the proximity and technological means to bomb domestic American targets. As such, efforts began to attempt to secure our borders in a way that the United States government had never before even considered — the infinite vertical expanse of the American skylines must somehow be secured.

In immediate response to this newfound domestic military role, the US Air Defense Command (often referred to as the ‘ADC’) was formally activated on March 21st, 1946, a mere 6 and a ½ months after the end of WWII. This new Air Defense Command was then charged with figuring out exactly how to tackle this unfamiliar defense task and was initially ordered to create a relatively primitive radar network built from the ‘leftovers’ from World War II (Winkler). Although not for a number of years, the Air Defense Command would later be reformed as the ‘Aerospace Defense Command’ in 1968 to serve essentially an extended version of the same role.

As such, initial efforts started from the most familiar possible post — still relatively new radar technology that had been left over from the last world war against the Nazis. Thus the United State’s first real domestic air defense measure was born — the ‘Lashup Network’, a sort of impromptu, stopgap measure before more sophisticated systems could be put into place, systems that the relevant ADC officials knew was already coming. The Lashup Network was first activated in 1948, anecdotally taking its name from the fact that the initial stations in the Lashup Network consisted of WWII radar antennae that were “literally lashed to the top of wooden platforms” (Winkler 27). It contained a measly forty-four stations, a majority of which were located on or near the US-Canadian border.

Soon after in 1950, Major General Gordon P. Saville championed the next successive US defensive radar network. The network became known as the ‘Priority Permanent Network’, the ‘permanent’ part of its name stemming from the fact that it was originally meant to be a perpetually maintained and upgraded system that would never need wholesale replacement. This new network was planned to be a two-part system, with the first part being a permanently stationed set of radars; in this sense of the word ‘permanent’, ‘designated non-relocating’ might be a better descriptor, but nonetheless the word ‘permanent’ was used even though it bore no relation to the name of the parent radar network (Priority Permanent). Digressing, the other part of the aforementioned two-part system was a collection of ‘mobile radars’ (more on this later) that would serve as a sort of second line of defense around the inner ‘permanent’ stations that guarded specific high-priority sites.

About twenty miles north of Seney, there’s a town whose seasonal population boom typically fails to exceed 500 people, and hasn’t seen a year-round population of more than 350 since the turn of the previous century. Grand Marais, Michigan stands as your stereotypical quiet little small town. There is one main road through town, the M-77 highway, which dead-ends in Grand Marais overlooking a beautiful Lake Superior. An old harbor refuge light adorns a part of the breakwall that makes the town’s small bay a safe-haven harbor for boats in heavy storms. By 1950, the outside world had really taken very little notice of this small town since around 1908 when the Coast Guard paid for and staffed the local lightkeeper’s quarters at the north end of town. But in 1952, the Air Defense Command deemed Grand Marais as a prime northern location for use in their new Priority Permanent radar array (PPRA) (McManus).

This new radar station, finished and manned in December of 1954 after a slew of budget-related delays that plagued many Priority Permanent radar array sites, became one of seventy-five such systems both in (read: domestic) and around (read: foreign) the United States, manned by a volunteer force of over 750,000. This particular site, not five minutes directly south of ‘downtown’ Grand Marais, was also a member of a subset of those seventy-five Priority Permanent systems — forty-four stations were designated ‘Phase I Mobile radars, the Grand Marais Air Force Station (AFS) among them. These particular stations were intended to fulfill their namesake, originally meant to be able to be folded up and moved into a new location on relatively short notice. In reality however, the ‘mobile’ moniker never really lived up to its title. Of the forty-four Phase I Mobile radars slated to have been built and operated, various continuous bureaucratic issues foreshadowed the eventuality that only twenty-nine would ever actually come online.

The Grand Marais Air Force Station in particular, callsign: ‘Brassmaid’ as designated as ‘M-109’ in the PPRA, was manned by the 906th Aircraft Control and Warning Squadron (often abbreviated as the 906th AC&W), a volunteer force of no more than 10 men. This squadron was responsible for the entirety of the operations of the station, keeping the station clean and livable, alongside doing the actual operating of the radar station. Now, as an Aircraft Control and Warning Squadron, the group’s immediate military function was to provide 24-hour radar surveillance using the site’s provided radar equipment, and, in the case of a detected an unidentified aircraft, to then report back to the site’s assigned Air Force base, have interceptors scrambled, and then to assume command and control of said interceptors in order to guide them towards the encroaching target. As featured in their squadron emblem pictured on the right, the 906th AC&W squadron’s motto was Vigiliae Coelorum, meaning either ‘The Sentinels of Heaven’ or rather ‘Watchers of the Skies’, depending on translational nuances (Ogletree).

Although the station had met its manpower requirement in late 1954 (December 1st), the station did not actually begin operating until 1956, 2 and a ½ odd years later. During its operational years, the site featured an AN/TPS-1D ‘Mobile Surveillance Radar System’, pictured on the left (McManus). This radar system functioned as the core of the Grand Marais AFS for its entire operational period. Just a handful of years later, due to budget cuts similar to those that delayed its construction, the ADC experience further financial troubles and against cut spending to the point that the Grand Marais Air Force Station was defunded and closed in 1957 (November 30th).

After the funding cut in 1957, the Grand Marais Air Force Station was converted to an unmanned, remotely controlled station. This new station, now designated as P-66A, was fitted with a AN/FPS-18 radar system and operated remotely from Sault Sainte Marie Air Force Station from February of 1960 until its eventual and final closing in June of 1968.

Below is a short list of personnel that manned the original Grand Marais Air Force Station, compiled by the very dedicated maintainers at radomes.org…

After the initial boom, creation, and relatively short lifespan of the Priority Permanent radar array systems, a new and improved idea was on its way. Meshed together by the new ‘Semi-Automatic Ground Environment’ (SAGE) system, the SAGE radar array sought to take the place of the Priority Permanent system. The SAGE system, as its unabbreviated form would imply, was a partially automated system that could reduce the required manpower and inherent complexity required by the last generation’s PPRA and Lashup stations. Prior to SAGE, radar stations typically reported back up a long and often obtuse chain of command that would eventually lead back to a ground-control interception (GCI) center. These GCI centers would then use a large whiteboard-style wall to record and update their drawn version of the airspace as information was fed in from the reporting radar stations (such as the Grand Marais AFS).

SAGE computerization conversions were done to many radar stations in the last generation’s Priority Permanent system, as well as a small handful of Lashup stations that were still in operation at the time. These computerized upgrades breathed new life into many of the older radar stations that were still being actively operated, but also led to the relocation of many of the previously staffed radio operators and maintainers. A small portion of these displaced staff members ended up in SAGE direction/control centers, the spiritual successors to the now most defunct ground-control interception centers. Two of twelve of the SAGE direction/control centers in the continental United States were actually right here in Michigan as well, with one in Fort Custer, activated in 1957 and operating throughout the 60s, and the other in Sault Sainte Marie, activated a year later in 1958 and operating during the same period.

In the twilight years of the now aging SAGE systems, many were decommissioned. Some were transferred to the jurisdiction of the Federal Aviation Administration (FAA) and remained there for many years. Some of the sites under FAA jurisdiction are even still operational, although the FAA is now actively working to replace these sites. Now, in 2019, many of these sites, including the Grand Marais Air Force Station, have simply been abandoned. They were stripped of their expensive or otherwise important parts and pieces, for example the extended radar dishes at the Grand Marais AFS site, and left to become overgrown. The Grand Marais AFS site, in particular, was stripped and sold to a local married couple who have now lived on the plot for many years. The site, now a mere relic of its former self, is still partially standing though — many of the old Quonset huts that housed the station’s staff are still standing in the back yard of the aforementioned Grand Marais residents.

Priority Permanent Radar Array (PPRA)
The Air Defense Command’s second go at a continental radar array. This is the network that the Grand Marais Air Force Station was a part of.

SAGE
Stands for ‘Semi-Automatic Ground Environment’, and is also used as a general name (SAGE array or SAGE radar stations) to refer to the collection of radar stations utilized together, many of which were using SAGE technology.

GCI
Ground-controller interception, often in the context of referencing a ‘GCI’ center which coordinated air-based military responses to any threats identified by the GCI’s surrounding and affiliated radar stations.