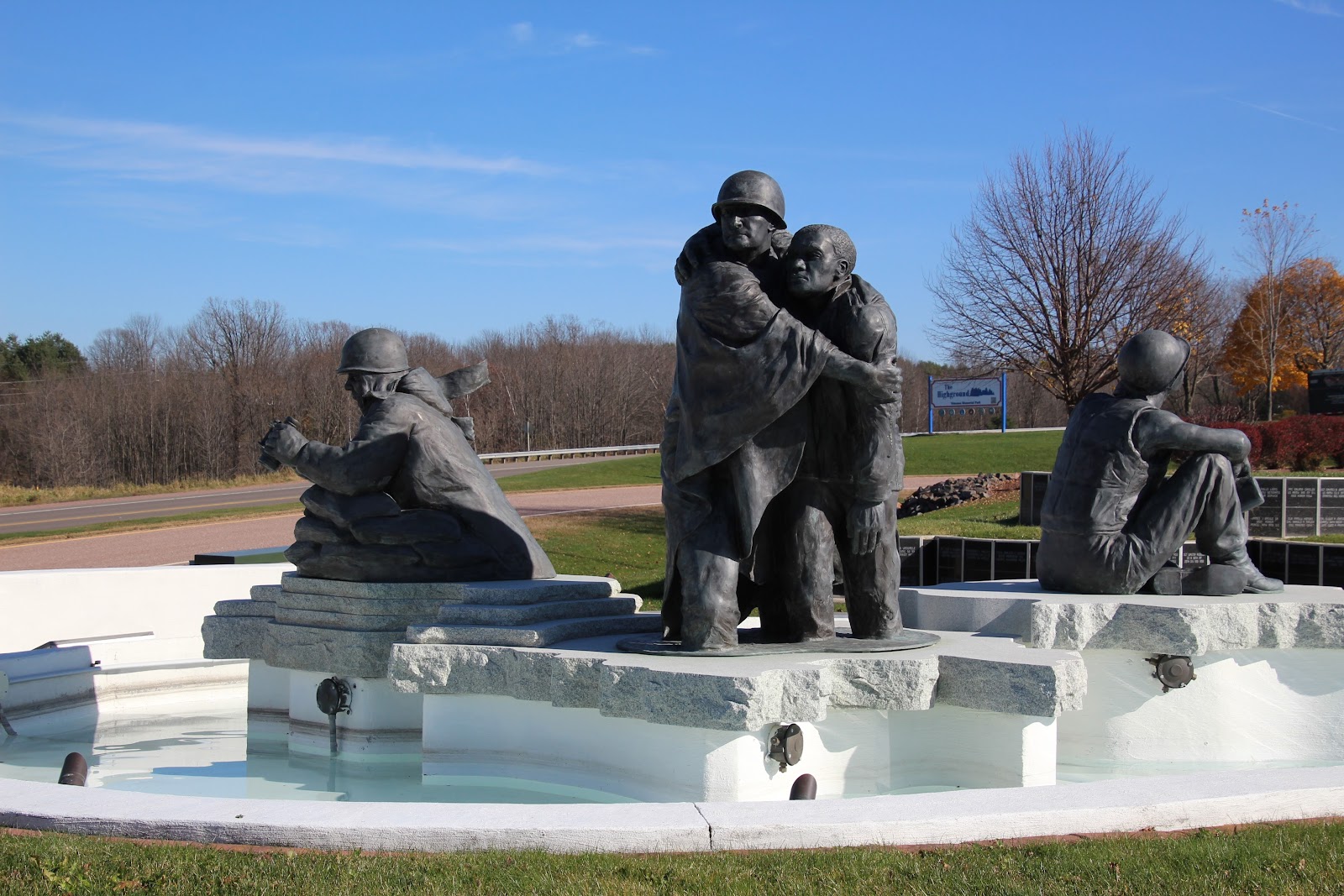 The Korean War, often referred to as the “Forgotten War”, is a war that broke out during the 1950’s [1]. This war came about because of the Cold War between the United States (US) and the Union of Soviet Socialist Republics (USSR) where the USSR influenced the Northern part of Korea, and the US influenced the Southern area of Korea. Veterans of the Korean War did not want the war to remain the Forgotten War, and so they wanted a memorial to help in remembering the war. In Wisconsin there is a war memorial called “The Highground Veteran’s Memorial” just outside of Neillsville, Wisconsin. At this memorial there is a monument in dedication to most wars post WWI, with one monument depicting the hardships faced during the Korean War.

The war monument was officially designated to be constructed at the Highground on August 2nd, 2006 according to the Clark County Press recalling an introduction ceremony of the monument [2]. The official completion date of the monument was July 28th, 2007, almost 1 year after the official announcement ceremony. The cost of the project exceeded $200,000 which was raised mostly by donations [3]. The monument was designed by a local artist, Michael Martino, who’s been sculpting for many years.

Michael Martino was born and raised in Wisconsin and has been sculpting since high school. Michael’s snow sculptures are his most well-known works because of his involvement in the 1998 Winter Olympic Arts Festival in Iiyama, Japan. Also because of his involvement in the 2000 World Snow Sculpture Championships in Kiruna, Sweden. In both events Michael’s team took 3rd place [4]. Even though Michael is more known for his snow sculptures he also sculpts with other materials too including: Wood, Bronze, and Sand. When the High Ground asked for design submissions, they required that 3 bronze figures were to be used. So, Martino decided to participate in the competition designing the entire monument around these bronze figures.

Depictions of the Monument

This war monument was designed with 3 bronze figures to depict the 3 main hardships that the war combatants had to face: cold climate, hot climate, and anguish. These are the main expectations that the Korean War veterans wanted in their monument [3]. One of the other key features shown are the 3 figures are stuck on an island in the shape of the Korean Peninsula to depict the location they were fighting in, and that these soldiers were alone far away from home. This tribute is also in the shape of the yin-and-yang symbol where one half is represented with grassy fields, and the other half as water surrounding the peninsula with the soldiers.  Another feature of this tribute is a representation of rice paddies with honor stones on it remembering some of those who have fallen during the war. Lastly, the monument also shows where the 38th parallel is, because most of the war was fought there.

This monument shows extreme cold conditions were faced by showing one of the figures being wrapped up and trying to stay warm while sitting on top of Mount Paektu in North Korea. The freezing cold that soldiers faced while on the peninsula was extremely horrid, especially during the first year of the war. Both troops and guns were not designed for fighting in the cold. The cold would end up causing artillery fire to be off when fired, people would lose small appendages like fingers and toes, and guns would freeze up causing them to not work [5]. Soldiers would wear 3-layers of clothes to try and stay warm, pour gasoline on the ground to start a fire, and use the exhaust from tanks and trucks to stay warm. “Korea’s climate is very similar to that of the United States east coast but more acute. During the summers, the heat and humidity were nearly unbearable, and during the winter, especially in the northern mountains, the arctic winds from Siberia turn the country into a frozen wasteland” [5].

Another depiction shown by the bronze figures is a man wiping sweat off his face, showing extreme heat. During the summer months the temperatures in Korea would get to be between 70-90 degrees Fahrenheit [6]. This temperature may seem reasonable to some, but these temperatures are without humidity. The average weight being carried on a soldier from World War II until the Vietnam War was about 80-100 pounds of gear [7]. So, while having to carry this equipment around with them throughout the summer months of the Korean War would make these temperatures unbearable.

The last figure shows a man supporting another soldier stand, and this is to help show the pain and suffering that was caused during the war. During the US advance into North Korea and fighting at the Chosin Reservoir the US casualties would increase by 14,000, with roughly half of these casualties being from the cold conditions causing frostbite [8]. Most of these wounded soldiers ended up losing limbs to the cold and needed help to walk. By the end of the war the number of US casualties would reach to around 136,000 [9]. Most of these casualties were from the cold causing the limb damage. There was also anguish from the death toll on the Korean population with 5 million casualties and with half of those being civilians [9]. After the initial attacks from North Korea pushing southwards of the 38th parallel and then being fought back, the war never really moved from this line.

Far Away from Home

When war first broke out between North and South Korea the North Koreans planned their attack to conquer the South just within 3 days of fighting. With this plan the North Koreans thought that the South wouldn’t be able to receive US aid in time because of the distance between the US and the Korean Peninsula. The US ended up having to call upon the United Nations to help in the matter. The United Nations first told North Korea to stop their advance and retreat to behind the 38th parallel. However, North Korea didn’t listen to their warning and continued pushing forward. After this, the United Nations called upon countries to send troops to the peninsula, and they were able to send about 340,000 troops. The US only had only a few hundred soldiers left on the peninsula at the time when the North Korean attack started, roughly 1/5th of these soldiers died defending South Korea [9]. This distance away from home is shown in the monument with the Korean Peninsula being surrounded with water, and nothing else.

The Korean War monument also distinguishes the 38th parallel. How the monument shows this is by elevating South Korea slightly above the North right where the 38th parallel is located on the peninsula. This location was defined in 1945 when the US and the USSR broke up the Korean peninsula between the Communist North, and Republic South [1]. This border would soon become a demilitarized zone where neither country would be allowed to setup any military structures or units. The only thing that would be built in this area is a small building meant to be used for negotiations between the North and the South.

Another one of the other reasons why the Korean Peninsula was broken up along the 38th parallel was because in 1948 the United Nations offered to hold elections in South and North Korea. South Korea agreed to the elections and Syngman Rhee was announced as president after receiving an overwhelming majority vote. However, in North Korea the USSR declined in allowing the United Nations elections from being held, and instead appointed Kim Il Sung as president [1][9]. Kim Il Sung was appointed his presidency because he had gotten USSR training, and then fought alongside them during World War 2.

In 1953 there was a cease-fire that was signed, and the war had ended, but the cold war had just begun in the peninsula [9]. Since this cease-fire was signed there has been no change in the border, except there have still been conflicts that have happened around the demilitarized zone. Even though they still fight both Koreas’ still want the same thing, one Korea under the same flag and to bring peace to the entire peninsula.

War for Peace on the Peninsula

The entire central area of the monument is designed in the shape of the Yin and Yang symbol. This symbol is a perfect depiction of the 2 Korea’s because the North can be Yin while the South would be Yang. They both are a part of the same whole, the Korean Peninsula, and both are striving to reunify the peninsula. Then because of each Yin and Yang having a small part of the other inside of them in the symbol represents that either could change at any time. Which helps stand for that there’s still a possibility for the 2 Korea’s to come back together and reunite the peninsula. This could end with Communism succeeding, a Republic succeeding, or maybe even uniting behind a different kind of government.

There are many reasons for both sides wanting to rejoin the Korea’s with one of the many reasons being because when the 38th parallel was first put in it ended up splitting family’s apart. There were people on both sides, in either North or South Korea that had family in the other. So, this desire to rejoin the Korea’s isn’t just for the leaders of these countries, but mostly for the people that live on either side that are missing their family. With many families being separated it doesn’t come as a surprise that both sides talk about uniting Korea again to help increase hope in these families.

Around this monument there is a ring of plaques describing the conflict that happened during the war in the 1950’s. However, the plaques only go halfway around the monument to show that the conflict still has not been resolved. Some of the conflicts that are happening today are dealing with North Korea’s nuclear warhead research. Then because of this research they are doing tests on the weapons. So, the US and many other countries in the United Nations have put sanctions on trading with North Korea. Until the day that the conflict in the Korean Peninsula finishes, and both Koreas’ become one again, the plaques are to remain in an incomplete circle around the monument.

Lost but Not Forgotten

The rice paddy fields are very important to the South Korean agriculture industry, and their overall Gross Domestic Product. In South Korea rice production was extremely high at the time because of the Japanese colonization since the early 1900’s [10]. So, right after World War 2 the production of rice in the Korean Peninsula was a means to produce some food to lower their imports.

In conclusion, this monument is truly a monument to show most of the events that happened during the Korean War, and to help make it a remembered war instead of the Forgotten War. The monument shows the conditions that soldiers were in and them being extremely cold, extremely hot, and fighting anguish. Then, the monument also shows the 38th parallel where most of the war was fought and is still the border between the 2 Koreas’ today. Also, the monument shows that the conflict is not over yet, and that the story of the war is still unfolding to this day. “Those who cannot remember the past are doomed to repeat it” – George Santayana. So, this “Forgotten War” needs to be remembered as the Korean War, otherwise we are doomed to repeat it.

[2] Kenyon, Dolores Mohr. “Not to Be Forgotten.” Groundbreaking for a Tribute to Korean War Veterans, Clark County History Buffs,

[8] MilitaryHistoryNow. “Cold Wars – Just How Freezing Was It On History’s Most Bone-Chilling Battlefields?” military historyNow, 6 Nov. 2019,