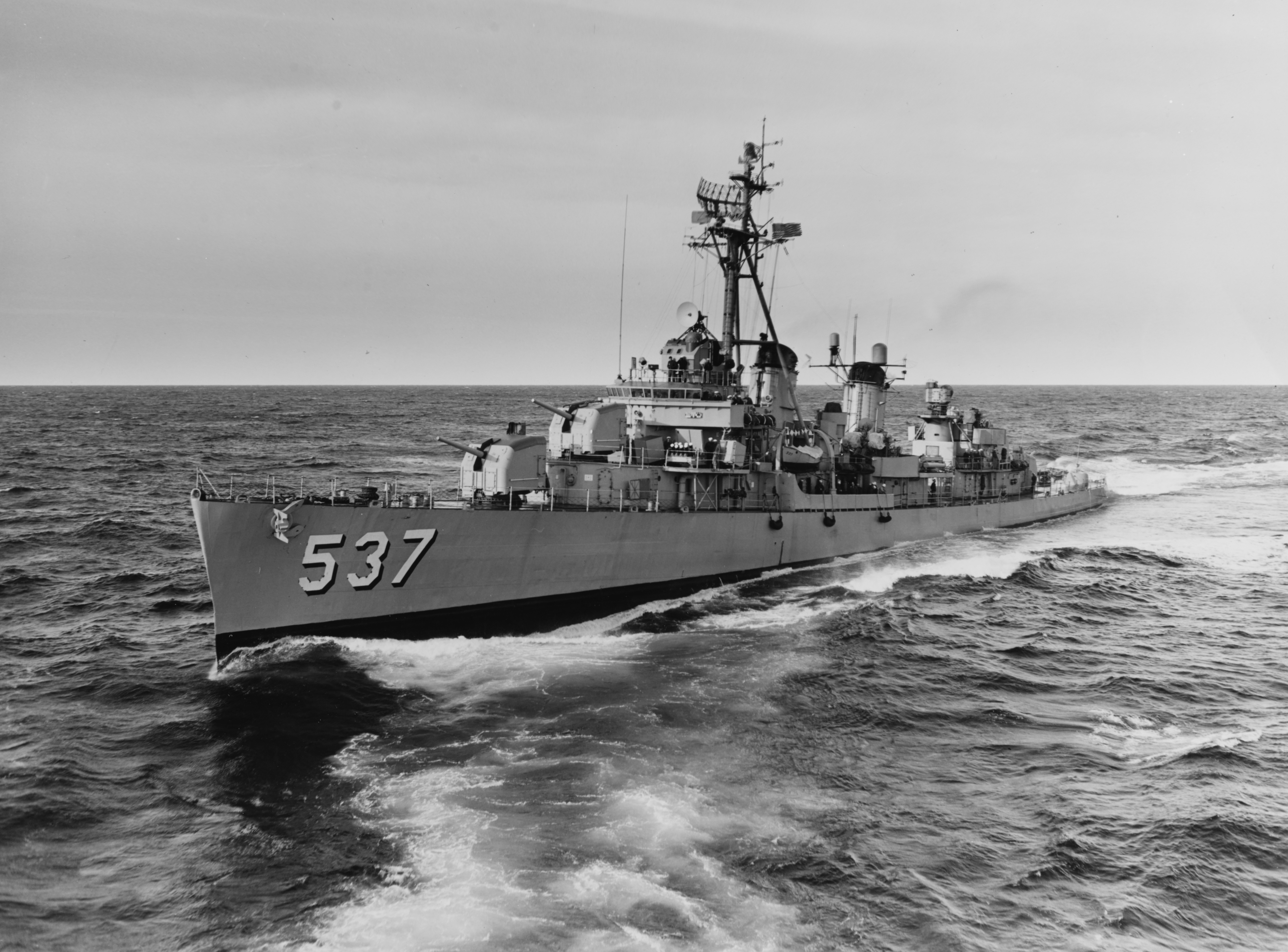 The USS Sullivans was a long-range, large destroyer used for anti-submarine warfare, anti-aircraft warfare, and surface action. The Fletcher class including The Sullivans are regarded as the backbone of the navy and know to be the best destroyer in the world. The Sullivans played a large role in World War II and the Korean War by protecting the vital aircraft carriers from opposing threats. The destroyers then had a life after the war, solidifying itself in history. From the history of its name, this boat was more than just an ordinary warship. The crew treated it a second life for the fallen Sullivans. They came together to be a well oiled and tight bonded crew, as seen in the ship’s motto, “We Stick Together.” The USS Sullivans didn’t lose a single sailor during her service.

In 1939 the United States of America was simply supplying the war in Europe. They had no intention of going to war. However, as the war raged on the axis powers were taking over land all over Europe and in the Pacific. It could be foreseen that America would get pulled into the war to fight for the allies. In anticipation of the war, a new class of large destroyers was being designed. The U.S. needed a response to powerful Japanese destroyers.  These new ships needed to have superior firepower, including anti-aircraft guns, torpedoes, and depth charges. One of the best classes of ships ever made came about to be known as the Fletcher class. The first 25 destroyers were ordered on July 1st, 1940. After pearl harbor and the United States’ entry into World War II, production increased exponentially. Over the 32 months following pearl harbor, eleven shipyards produced 175 of this class of destroyers. The Fletcher class became the most produced class of destroyers ever.

During the Battle of Guadalcanal on the 13th of November 1942, the USS Juneau was sunk by Japanese submarine I-26. 687 sailors died during the sinking of the Juneau and only 10 survived. A group of the men that died were the 5 Sullivan brothers. They enlisted intending to serve together. They were brothers that formed a stronger force together than separate and wanted to provide that force to the U.S. military. The loss of the Sullivan brothers became the biggest loss that one family had ever seen.  After hearing of the sinking of the USS Juneau, President Franklin D. Roosevelt immediately changed the next Fletcher-class ship to be produced to be named The Sullivans in honor of the Brothers. This was the first ship ever to be named after more than one person.

During the launch of the USS The Sullivans (DD-537) on April 4th, 1943 it was christened by Alleta Sullivans, the brother’s mother. After sea trials the USS The Sullivans entered the United States military service when it was commissioned on the 10th of September 1943. After being commissioned the new destroyer went right into service in the Pacific theatre of WW2. It was assigned to Destroyer Squadron 52 with 8 other 2,100-ton Fletcher class destroyers and attached to task group 58.2. The destroyers’ job was to screen for the third and fifth fleets’ fast carriers.

The Sullivans had an important part in World War 2, taking part in intense combat, rescuing downed aviators, and earning nine battle stars for her service. The first task for the USS Sullivans once joined with task group 58.2 in the Marshall Islands was to screen for Essex (CV-9), Intrepid (CV-11), and Cabot (CVL-22) as they performed areal strikes on Roi for two days. To screen the destroyer was sent as a picket in front of the fleet, as a line of defense from an enemy attack before they reach the rest of the fleet. After the aerial attack on Roi and Numar islands, the U.S. Navy supported its troops landing and fighting during the Battle of Kwajalein. After refueling and resupplying, the task group soon moved on to a Japanese base in Truk. Once again, the Destroyer Squadron screened for the carriers whose planes launched an attack. The ships again didn’t receive any initial direct threat due to the shear surprise of the attack. The commander for the USS The Sullivans wrote, “No enemy opposition of any kind was encountered.” Although no initial threat was present against Truk, Japanese bombers soon appear out of the sky.  During the counterattack, carrier USS Intrepid was struck by a torpedo. The USS The Sullivans was soon right by her side along with two other destroyers. They were able to supply the damaged carrier with repair equipment and escort the carrier back to port. The overall attack on Truk was seen as successful. The USS The Sullivans receiver her first battle star for her actions in the Marshall Islands operation.

Later in the war during the attack on Formosa, the Japanese performed a large aerial attack on the American task force. Due to evasive maneuvering the USS The Sullivans was able to evade all enemy threats while being able to shoot down 6 Japanese planes. The next day the USS Houston and USS Canberra were critically hit by “Betty” torpedo bombers. The Sullivans was then assigned to escort the damaged cruiser back to port to be repaired. During the journey back they encountered a determined Japanese areal force. Their goal was to finish off the damaged cruisers at any cost. Due to the numerous anti-aircraft weapons on the USS Sullivans, it was able to shoot down multiple enemy planes. After beating back the Japanese force, the USS Houston was in critical condition. The Sullivans rescued 118 USS Houston men and kept them on board until they were transferred to USS Boston. The USS Sullivans then transferred salvage gear to Houston and helped with the ship’s many wounded. For this part in the battle as well as the rescue and salvage attempt the ship received its sixth battle star.

The USS Sullivans was also present during the Invasion of Okinawa. Due to its class the USS The Sullivans, once again, screened for the carriers as they launched air strikes. The destroyer got into a fierce fire fight with enemy forces when they attacked the US Ships. After the USS Halsey Powell was hit by a Japanese plane, the USS Sullivans immediately approached it to provide support. While transferring her medical officer and a pharmacist’s mate to Halsey Powell, another kamikaze came out of the sky. The Sullivans scrambled and opened fire to evade a connection with the Japanese plane. After fighting off numerous planes, The Sullivans was able to help Halsey Powell to safety and get repaired. The ship rendezvoused off Okinawa and guarded the carriers supporting the landings on the island. While operating on radar picket duty on the 15th, the ship came under enemy air attack, but downed one plane and emerged unscathed. The American ship’s anti- aircraft guns were constantly firing at the Japanese planes. The Japanese launch everything they had in a last-ditch effort to destroy anything they could from landing ships to carriers.

With the return of peace, the navy necessity for a large navy was reduced and many warships, including the USS The Sullivans, were mothballed and decommissioned. The Sullivans remained dock in the San Diego port until the beginning of the Korean war. In 1951 she was recommissioned and went back into service. She joined the 77th task force which was an aircraft carrier strike force. The destroyer once again fulfilled the necessary role of screening for the vital carriers. The Destroyer was also tasked with bombarding the coast and destroying supply lines.  The Sullivans did an extraordinary job in destroying railroad cars, tracks, and other prime sources. The Ship received two more battle stars during its Korean War efforts.

After returning home after the Korean War, it wasn’t decommissioned right away and sent to rot. Instead, the USS The Sullivans was kept in service and used to patrol the Atlantic Ocean. It stayed ready for anything that was thrown its way. During the deployment to the Caribbean the warship helped to rescue five of eleven survivors from a U.S. Air Force KC-97 Stratofreighter that crashed into the ocean of the coast of Florida. The USS The Sullivans was also there to help rescue Commander Alan Shepard’s Mercury space capsule, Freedom 7. The Freedom 7 was the first human spacecraft to enter orbit and return safely. In 1962 the ship was sent to Guantanamo Bay to serve as a model destroyer. Sailors or students at the time could get hands on experience on a destroyer and learn the fundamentals of hoe its run.  During the Cuban Missile crisis, The Sullivans was right there to blockade Cuba from the Soviet Union. The Sullivans was also apart of the search for the nuclear submarine the USS Thrasher that was lost off the coast of Boston.

The USS The Sullivans was decommissioned and mothballed again on January 7th, 1965. The ship sat at the Philadelphia Naval Shipyard for the next 12 years. Then in 1977, it was decided that the USS The Sullivans and USS Little Rock would be donated to the Buffalo and Erie County Naval and Military Park in Buffalo New York. These ships would be joined at the park by submarine USS Croaker in 1988. The USS The Sullivans now serves a different purpose than what it was designed for; to act as a memorial for those lost during the war and to preserve the history of that time. The ship is open for public tours where civilians are able to get a glimpse of what life was like on the USS The Sullivans. Every year there is a reunion for veterans that served on the ship, to gather and remember a different time as well as share stories with new friends. The motto of the ship, “We Stick Together,” can still be seen as various veterans from different times can come together and share their memories. The U.S. navy ship was declared a National Historic Landmark in 1986.