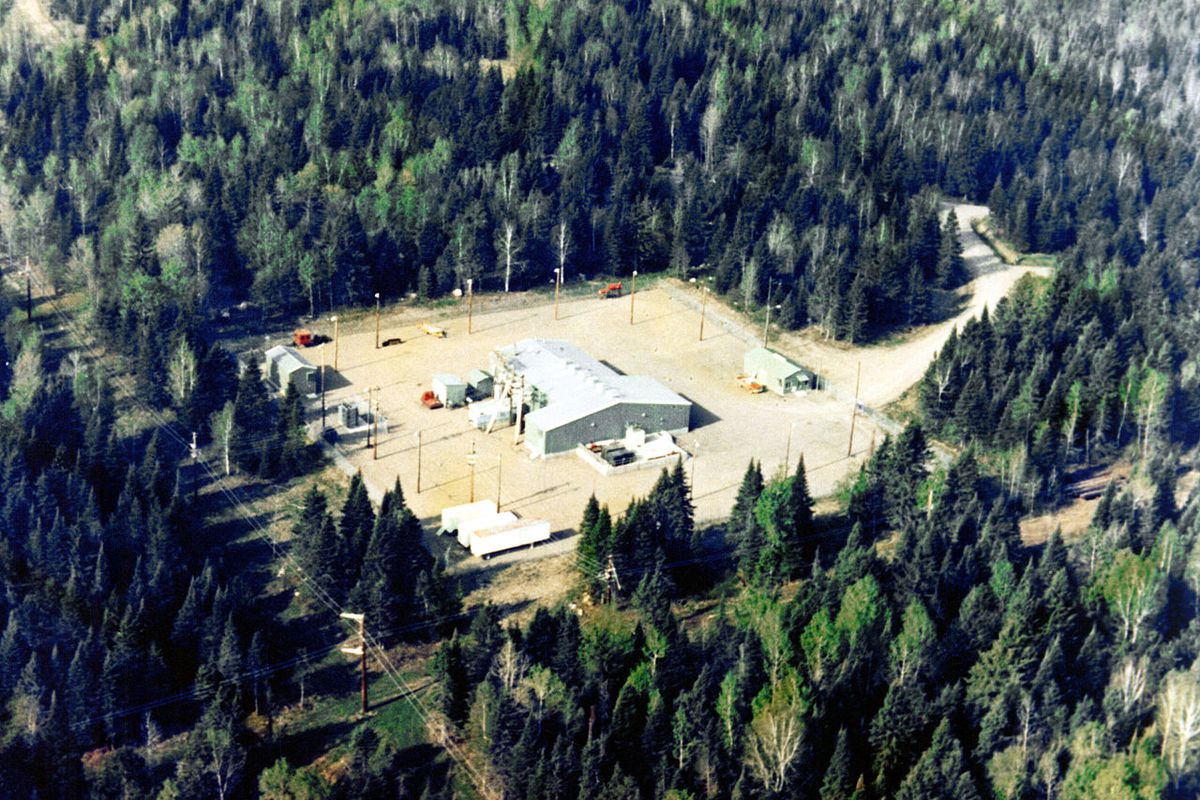 In the 1960s the US Navy devised a plan to create a way to communicate with deep-sea submarines anywhere in the world. To create this world’s largest radio antenna, 41 percent of Wisconsin would have a large grid of cables running underneath it, ultimately turning its bedrock layer into this giant radio antenna.

This idea came up during the Cold War, because there was no dependable way to send signals to the nuclear-powered submarines that would be submerged for months at a time. Radio waves do not travel well through water, so Project Sanguine was an attempt at ensuring that there was an antenna capable of transmitting extremely low-frequency (ELF) waves through the water to reach the submarines uninterrupted. As it turns out, this project never came to fruition, largely based on its overwhelming cost, and the environmental impact it would have. These concerns that kept this project from being completed will be discussed in more detail in the rest of this report. Even though Project Sanguine never came to be, it led to the creation of another, much smaller project, Project ELF. Project ELF was built between Wisconsin, and Michigan’s Upper Peninsula and was operated from 1989 to 2004.

The need of ELF communication was directly from the cold war between the USA and the Union of Soviet Socialist Republic (USSR). At that time there was not an efficient way of communicating with deep water submarines. This caused concern that if they were needed to enact a preemptive or retaliation attack, there would be no way of getting a hold of the submarine until it resurfaced, and by that time, it could be too late.

Using ELF radio waves, the frequencies of the bandwidth of the transmission is very small, therefore the system was only able to transmit short coded text messages at a very slow rate. The signals were designed and used to communicate with submarines that were deep under the surface of the water to alert them to surface, so that a longer message could be sent. To ensure that the sub was always within communication range, there was a constant signal being sent 24 hours a day.

Once World War II came to an end, political tensions rose between the US and the USSR stemming from differing opinions on what political system needed to be implemented in Europe. Along with this rise in political tension came a rise in the buildup of weapons of extreme destruction, including the use of nuclear weapons (Millett and Maslowski).

The US started analyzing weapons system capable of withstanding any type of attack without losing communication. This led the US Navy to discover that weapons systems that operated predominantly in ocean waters would be the most resilient from any of these types of attacks. Ultimately, the Navy implemented the TRIDENT weapon system which was used on nuclear submarines starting in 1979 (Klessig). With this new technology, came the need of ELF more than ever, without timely contact with the nuclear submarine, the TRIDENT could not be used. This new technology would allow the Navy to keep their nuclear submarines submerged while still being within radio contact so that the submarine could receive a message without becoming susceptible to enemy attack (Kruger).

ELF waves are transmitted using a low frequency of 45 to 75 Hz. This frequency is very reliable and has the ability to be received extreme depths the nuclear subs are traveling at due to low atmospheric and sea water attenuation (Kruger). The signal from the transmitter does not degrade significantly from atmospheric conditions as well as the depth of sea water. If the US were to be attacked and hit by a nuclear blast, the signal would still not degrade while traveling though the blast wave, because of the low frequency transmission used (Kruger).

The Beginning of Project Sanguine

Project Sanguine was officially proposed in 1968, originally, the proposed system would create a giant antenna consisting of 6000 miles of buried cables. The cables would be assembled in a rectangular grid that would span over 22,500 miles, covering nearly 40% of the state of Wisconsin. This grid would be powered by 100 underground power plants in concrete bunkers. The cables themselves would be grounded at their ends, with loops of AC current flowing 6 feet deep through the bedrock layer, resulting in the generation of ELF waves. The project was on track to cost billions of dollars and consume 800 megawatts of power. This large cost was justified in the minds of the supporters because it was a matter of national security. This system was able to survive nuclear attack, enemy jamming and, deep water, and inclement weather. This is all to ensure that in a moment of need, the signal is available to emergency messages. The key to being able to withstand anything is because without having a guarantee of constant communication, it no longer acts as a viable deterrent from foreign attacks (Kruger). There was also a fail safe incorporated into the design of Project Sanguine, if any part of the system was destroyed by a nuclear bomb or was interfered with by enemy jamming, the system would not only keep sending the constant signal, but will increase the rate of signal messages, with limited loss in signal strength from the transmission facility (Kruger). This increased frequency of transmission also acts as a signal that the system is under duress and needs to have attention towards it.

A project that is planning on covering 40% of the state of Wisconsin is a huge undertaking. Especially if the system did not work as designed. This measure was though of and countered with the creation of the Sanguine Test Facility in Clam Lake, Wisconsin in 1968 (Klessig). This was a small-scale test of the much larger system, but the project needed to be tested and verified on a much smaller scale in order to ensure that all will work as designed. The Clam Lake test facility was built not only to ensure the project would work, but also to test and find limits of ELF communication, allowing for future modifications to be made and have the whole system improved upon. Part of the testing was to analyze the effects of ELF transmissions on nearby telephone poles and electric power lines running through the area for local residential housing. The research that was conducted found these flaws and then techniques to eliminate the effects of the interference on the lines (Kruger). Public opinion takes a large role in a project this large, and if it begins to alter regular living of citizens or other important communications, there is a large chance of the project being shut down and given up on. The field tests that were conducted were sending ELF transmissions around the world to a submarine that was traveling underneath the polar ice cap above the Artic Circle (“Extremely Low Frequency”, 2001). The next step after the successful transmission would be to analyze all of the results of the tests and ensure that the facility would be able to operate as it was initially designed.

Upon analysis, the US Navy determined that the site would be capable of operating effectively and efficiently without causing any effects that would negatively affect surrounding population, or the environment. The strength of the electric field radiating off of the lines between stations was found to have a maximum strength of 0.07 Volts per meter. This small amount of electric field strength was found to have no effect on the surrounding wildlife or vegetation in any vicinity near the lines providing limited ecological impacts (Kruger). Any instances that was found to have interference with the local power poles and telephone lines was able to be alleviated or eliminate completely. This ensured the Navy that there would be no threats to society, and the project continued with operation of the facility (Kruger).

The Fate of Project Sanguine

Once the results test analysis of the project was announced, a provisional panel was created by the National Academy of Sciences and the National Academy of Engineering in 1973. The purpose of this committee was to review the US Navy’s statement that the ELF system would perform as expected. There was hesitation in the belief that this system would come without draw backs, these were expressed in two papers that were written questioning whether the system would work correctly and if certain technical issues were identified correctly. Following the publishing of these papers, the committee reviewed the concerns and checked these against the data collected at the Wisconsin Test Facility, consulting with experts in that field of study to determine if the arguments proposed against this project were valid (Booker). Many of the concerns mentioned pertained to atmospheric issues like signal jamming, attenuation and signal noise. Signal noise issues could come from natural events, such as thunderstorms, but upon analysis from the panel, concluded that while it could be an issue, it would depend entirely on the location and time of the incident. The secondary issue with noise was the difference between the communication cable being buried or above ground, and the panel determined the effects were negligible (Booker). Enemy Jamming concerns were addressed in the same fashion, experts concluded that while it is possible, the amount of power would be unrealistic to expect that an enemy would be capable of jamming the signal. The process of jamming that could affect the system would be so difficult and expensive, that it was deemed capable of resisting any attempt of enemy jamming (Booker). Concluding the investigation of these possible flaws of Sanguine’s system, the panel ultimately concluded that the Navy’s initial proposal would in fact work as designed and there would be no environmental impact causing the project to fail. The panel of experts proposed that more tests should be concluded to ensure all operations of the system would be to status quo (Booker)

While this project was validated to work as expected, another project by the name SEAFARER was concluded to be a more effective design of the system. Ultimately, in 1975, the new project SEAFARER was launched, utilizing two transmission stations as opposed to Sanguine’s single station. The location of this second station was picked to be in Michigan’s upper peninsula, in Republic, MI (Webbe).

As it seems, the project was extremely controversial from the start and attacked by environmental groups, politicians, and antiwar groups who were concerned about the effects of high ground currents and electromagnetic fields on the environment. The Navy eventually abandoned the project, but proposed some more mild variants. Both Project Seafarer (1975) and Austere ELF (1978) were shut down once again, until Project ELF (1981) was finally approved. Senator Gaylor Nelson, Democrat of Wisconsin, had fought the project for five years, and finally in 1973 went on the record saying,” The expenditure of $57‐million for development of Project Sanguine has been a tragic waste of the taxpayers’ money”. In 1995, Russ Feingold submitted a bill to congress to shut down project ELF entirely (Feingold). Ultimately, the Project was reviewed, and on September 30, 2004, the Navy determined that due to the collapse of the USSR in 1991, there need for nuclear deterrence was not as extreme, and was deemed outdated and unnecessary (The Nuclear Resister).

After years of fighting and appealing, Project Sanguine was ultimately dropped by the US Navy, but had three more proposed projects to replace it. Ultimately, Project ELF was launched and grew roots in Northern Wisconsin and the Upper Peninsula of Michigan, but being that there were six communication systems set up for communicating with submerged vessels, the project was ultimately shut down in 2004.