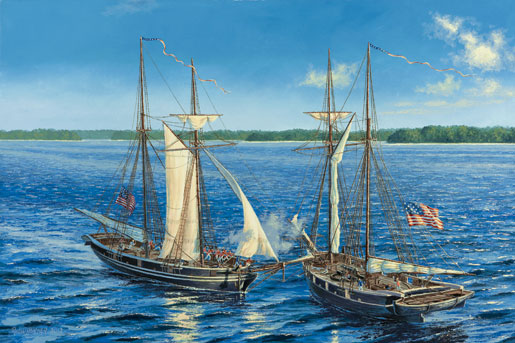 The Capture of USS Tigress and USS Scorpion in 1814

Naval Conflict on the Great Lakes

The War of 1812 was a conflict between the United States and Great Britain starting in 1812 and lasting for three years. It began with the invasion of present day Canada by the US Army. Throughout the war, many battles were fought, but neither participant came out as a clear victor. During its three years of duration, the War of 1812 saw many different theaters: the Great Lakes, Niagara, Chesapeake, and New Orleans. Naval conflicts were relatively common in this war, with action on the Atlantic Ocean and on the Great Lakes.

Most of the naval action on the Great Lakes during the War of 1812 occurred on Lake Erie, which was the most immediate body of water separating present day Canada and the United States. The most famous naval battle on the Great Lakes during this time is The Battle of Lake Erie, which was a great victory for the United States. Captain Oliver H. Perry celebrated afterwards claiming “We have met the enemy and they are ours: Two Ships, two Brigs one Schooner & one Sloop.” (Captain Oliver H. Perry to Major General William Henry Harrison, U.S.A. in Dudley, 1985).

The naval action on the Great Lakes during the War of 1812 would cause the most carnage that the lakes have likely ever seen. Many ships prepared for combat would navigate the waters of the Great Lakes from both sides. Eleven American ships patrolled the Great Lakes, as described by Master Commandant Oliver H. Perry in 1813 (Master Commandant Oliver H. Perry to Christopher Raymond Perry on Aug 9th, 1813 in Dudley, 1985). Two such ships from the American side where USS Tigress and USS Scorpion, who would prove to go through a unique experience during the war.

Both USS Tigress and USS Scorpion were Schooners in the War of 1812. Schooners were not the ships with the most guns, which were called “ships of the line”, but they were important nonetheless. Each ship was armed with at least one cannon. The USS Tigress had a single heavy gun while USS Scorpion had two heavy guns as of August 9th, 1813 (Master Commandant Oliver H. Perry to Christopher Raymond Perry on Aug 9th, 1813 in Dudley, 1985) . These Schooners were some of the most common ships seen on the Great Lakes due to their ability to sail into the wind better than other vessels and for their manageability. Additionally, Schooners were popular ships for privateers and were known for their abilities to overtake enemy ships (Marsh, 2011).

The Blockade of Mackinac Island

The most notable event experienced by these two ships, which was their last actions as ships of the US Navy, occurred in the waters near the British Fort Mackinac. The Americans attempted to take Fort Mackinac during 1814, by landing 250 volunteers on the north side of the island to overtake the British force. British forces efficiently countered the American offensive. These Americans were forced to retreat after ambushing flanks of Native Americans caused confusion among the volunteers (Amato, 2015).

After the failed attempt at an invasion of Mackinac Island, American forces resorted to blockading the port to pressure the enemy forces. USS Tigress and USS Scorpion, having just transported supplies for The Battle of the Thames, were ordered to carry out this task and disrupt the incoming supplies to the island (United States Naval History Division, 1959). This interruption of supply lines was extremely impactful, considering the United States destroyed approximately six months’ worth of supplies and provisions that were in route to Michilimackinac. The British, recognizing their inability to survive long without fresh supplies, were forced to make a counterattack. If they could not lift the naval blockade within two weeks, the British would be forced to surrender (United States Naval History Division, 1959). Unfortunately, this blockade would prove to be unsuccessful and the Americans would lose control of the region.

The Capture of USS Tigress and USS Scorpion

No British ships were able to pressure the USS Tigress and USS Scorpion, as the British had no nearby ships: The HMS Nancy had protected the area until she was burnt and sunk to avoid American capture.

Lieutenant Miller Worsley, previous captain of the recently sunk HMS Nancy sought to capture the USS Tigress. On the dismally cloudy night of September 3, 1814, Lieutenant Worsely, along with many British men and Indian allies and led by Lieutenant Bulger, approached the anchored ship silently using oar boats. Once the party reached their target, they boarded the USS Tigress and fought for her control, leaving several American men killed and wounded, including the American commander Champlain, who did not surrender until he himself was severely injured. After the USS Tigress was captured, Lieutenant Bulger retained a majority of the boarding party aboard the ship. Lieutenant Worsely had another plan, for which he needed these men and kept the American flag flying above USS Tigress.

A personal account from a British attacker stated “we were within ten yards of the enemy before they discovered us, it was then too late, for in the course of 5 minutes her Deck was covered with our men and the British flag hoisted over the American” (Graves, 2013). Unfortunately, this lack of ability by the officers of the US Navy in the War of 1812. Master Commandant Oliver H. Perry voiced his concerns to the Secretary of the Navy Jones on August 4th, 1813, saying “They [the ships of the US navy] are neither well officered or manned” (Master Commandant Oliver H. Perry to Secretary of the Navy Jones on Aug 4th, 1813 in Dudley, 1985).

With the two ships that once blocked the supply routes to Fort Michilimackinac captured, the starving British garrison could now be fed. This military movement concluded the conflict between British and American forces in the region, allowing the control of the upper Great Lakes by the British.

After the war concluded with the memories of the USS Tigress and USS Scorpion’s blockade still fresh, the British forces recognized the importance of the Nottawasaga River route which was the source for supplies to the upper Great Lakes region. In 1816, the erection of a fort on the Nottawasaga River was completed, intended to protect the storehouses ashore. These storehouses were to supply the military posts at Michilimackinac, Drummond Island, and Penetanguishene. However, the garrison at the fort was moved to Penetanguishene in 1818 and the fort was left unmanned.

Royal Navy Commander Worsley’s tactic for capturing the USS Tigress and USS Scorpion of using small boats to seize a larger ship at anchor is notable in naval history. Such a feat is almost comical and embarrassing to the crew of the captured ship. Barry Gough says in his article Capture of the Tigress and Scorpion, War of 1812 ”the American commanders were largely absolved of blame for the loss of the vessels under their command, insufficient signals being specified as the reason for the second loss.” (Gough, 2012).

The capture of the USS Tigress and USS Scorpion had little impact in the War of 1812. Despite allowing the British to control the territory of the upper Great Lakes, the land would eventually be returned to the United States in accordance to the peace terms of the conflict. The ships did not take part in any notable battles after their capture by the British. HMS Confiance was used as a flagship, as mentioned above, but the ship took no part in any significant battle as a flagship. In the end, USS Tigress and USS Scorpion played a very small role in the War of 1812 after their capture in 1814.

Had the USS Tigress and the USS Scorpion not have been captured, the outcome of the war would hardly be different. If the American Navy did not lose USS Tigress and USS Scorpion and maintained the blockade on Mackinac Island, the United States would have eventually been able to take over the fort on Mackinac Island. Despite this, the outcome of the war would not have significantly changed. The United States would not have had the resources to exploit the advantageous position of holding territory in the upper Great Lakes. Even if the United States controlled the territory of the upper Great Lakes, the country would not be able to utilize the area to it’s full military potential.

The British captured many ships during the War of 1812, especially from their blockade in the Atlantic Ocean, as seen in Admiral Sir John B. Warren’s letter to First Secretary of the Admiralty John W. Croker (Admiral Sir John B. Warren, R.N., to First Secretary of the Admiralty John W. Croker on Nov. 11, 1813 in Dudley, 1985). The Americans also captured many British ships, many of which were converted into ships of war by mounting guns onto previously weaponless ships, as Captain David Porter reported to Secretary of the Navy Hamilton in 1813. Stealing the other side’s ships was practical, hence it was so common in the War of 1812. However, no attack of this type was ever as entertaining as the capture of USS Tigress and USS Scorpion by the Royal Navy’s Lieutenant Miller Worsley. .