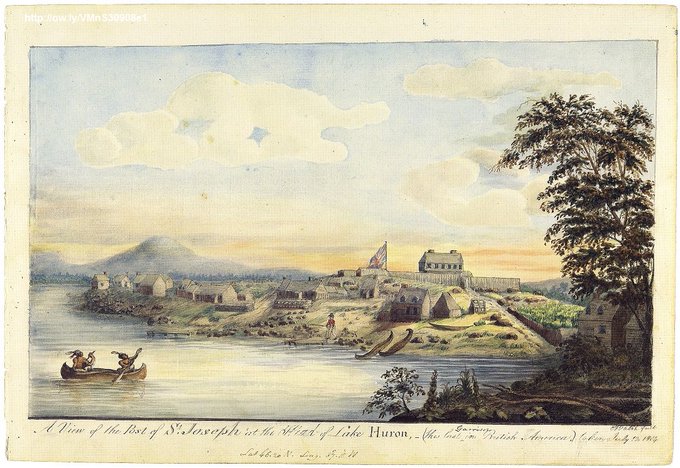 The British establishment of Fort St. Joseph, built along the St. Mary’s River on St. Joseph Island was used to strategically take the American establishment of Fort Mackinac in the War of 1812. This was a significant capture for British forces as they could control shipping connections from Lake Michigan and Lake Huron. During a time when American troops were attempting to overtake land in British Canada, controlling the Great Lakes was an important military asset.

The Fort was constructed by the British between 1796 and 1799 on the southern most tip of St. Joseph Island along the St. Mary’s River. Originally, the British occupied what is known as Fort Mackinac. However, the Revolutionary War, fought between King George’s Britain and the “American” colonists, saw the territory seized. The defeat of the British prompted the removal of British soldiers from Fort Mackinac forcing them to relocate and refortify. The island of St. Joseph, located to the northeast of Mackinac Island, was where the British established a new post for themselves, calling it Fort St. Joseph. This land was purposely chosen for the new fortification as it was located along the same Great Lakes waterways and a short travel away from the American Fort Mackinac. It consisted of a blockhouse, bakery, Indian council house, and storehouse. Trading was most significant at Fort St. Joseph after its establishment in the 1790s and early 1800s. The Northwest Company established a commercial depot in 1798 to exchange furs and other goods with the Native populations in the area. The Fort was garrisoned by a small regiment of soldiers, manning 4 cannons and 6 small swivel guns. When war was declared in 1812, the 10th Royal Veteran Battalion was stationed at the fort. The Battalion consisted of one captain, Captain Charles Roberts who commanded two lieutenants, one ensign, two sergeants, four corporals, and 36 infantry soldiers.

The causes for the war of 1812 stemmed from American and British tensions, including the attack on the unprepared Chesapeake, an American merchant ship off of the eastern United States coast. In 1807, the British frigate Leopard fired into the Chesapeake, killing and wounding several of the crew. In addition, the British frigate took American sailors hostage as “English deserters”, and brought them into the port of Halifax to be hanged. Conflict on the seas wasn’t the only cry for war against the British. Frontiersmen called for war in response to the British arming Native Americans with guns and convincing them to attack settlers. In reality, the British were engaged in war with the French and could barely supply the Canadian garrisons with enough firepower to protect themselves. “Under the order of Sir James Craig (the Canadian governor general from 1807 to 1811) the agents of the Indian Department were forbidden to supply muskets or ammunition to the savages on the frontier, and the ban was repeated by Sir George Prevost when he took office in 1811.” (Raddall) These various conflicts, along with lingering animosity towards the British after the Revolutionary War, sparked the War Hawks to push for war after the elections of November 1811. The War Hawks were a group of young congressmen from the Southern and Western states, who were all in favor of national expansion. They sought to add Canada and Florida to the territory of the United States, as well as push further west against Native American forces. Most famously known was Henry Clay, a lawyer from Kentucky who was elected based on his anti-Indian and anti-British sentiments. President James Madison, who was elected after Jefferson in 1809, followed in his footsteps attempting to avoid war with Britain. However, in the end, Madison was encapsulated by War Hawk demand, leading to his call for state militias to take arms on April 10, 1812, and eventually the declaration of war against the British on June 12, 1812. The decision was opposed by most northern Federalists from Maine to Delaware, who called it “Mister Madison’s war.”

After America declared war on Britain on June 12, 1812, the news of conflict didn’t arrive from Montreal to Fort St. Joseph until July 8. Captain Charles Roberts prepared the 50 or so soldiers stationed at Fort St. Joseph for battle. According to several Canadian sources, Roberts received confusing orders from Major-General Isaac Brock over whether to defend the Fort or launch an attack on the Americans at Fort Mackinac. Aggressively, Captain Roberts assembled a force of one thousand men, consisting of garrisoned soldiers, fur trade employees, and First Nation allies to set off towards the once British fort, Fort Mackinac. On July 17, Roberts’ men landed on the island. They took with them several artillery, which they tirelessly hauled over the Michigan cliffs. The sixty or so blue-coated American soldiers who manned the establishment were unaware of the declaration of war, and Roberts took the Fort with ease, pressing American Lieutenant Commander Porter Hanks to surrender against overwhelming forces. Most of Roberts’ garrison moved to the stronger American fort, which proved to be a strategically important move. As the British occupied Fort St. Joseph which guarded the approach to Lake Superior, and Fort Mackinac, which guarded the approach to Lake Michigan, it allowed the Native tribes of the West to join Tecumseh in the fighting against the Americans. After the British captured Fort Mackinac, “The Natives at the foot of Lake Michigan, eager to avenge Tippecanoe…slaughtered half the garrison at Fort Dearborn upon their retreat.” (Raddall) With the Great Lakes in control of the British, it seemed like the War Hawk aim of conquering Canada would be impossible.

During the War of 1812, rations and supplies such as coats, boots, wool, and weapons were hard to transport to British control in the north and west. Often seen as the last priority, the shipments of supplies were late and underwhelming, as the ships would have extreme difficulty chopping through the frozen waters of the Great Lakes. As previously mentioned, the British were also fighting Napoleon in Europe, and military tools, guns, and ammunition or gun powder was hard to come by in the Canadian territory, because they were needed overseas. Because of the vast isolation of the northern fortifications, throughout the winter, starvation was the main enemy of the British forces. “Lieutenant Robert Dickson, then at Green Bay, was ordered to collect all the beef, flour, and peas he could find and forward them” (Dunnigan) to British forces. Drunkenness was also a side-effect of brutal weather, inadequate housing, and a lack of action around the region. The soldiers, against the orders of Captain Roberts, would drink away the long days and nights, leading to worsened conditions around the fort. The summer of 1814 offered relief as reinforcements such as Lieutenant Robert McDouall arrived to aid the British soldiers stationed at both Mackinac and St. Joseph.

While an overseas treaty was taking place in the summer of 1814, American Commander St. Clair and Colonel Croghan floated up Lake Huron with 5 warships along with 400 seamen and 750 soldiers. Unfortunately, this resulted in Croghan and his soldiers burning the shacks of former settlers on St. Joseph Island, looting and burning the village of Sault St. Marie, and demolishing a fur post of the Northwest Company. From St. Joseph Island the Americans sailed to recapture Fort Mackinac. With “no more than ninety redcoats, fifty backwoodsmen, and fifty Indians” (Raddall), British Colonel McDouall “slipped out and met Croghan’s cautious advance in the woods between the fort and landing spot.” (Raddall) The deadly shootings and Indian assaults forced Croghan’s troops to retreat to the ships. In response to the defeat suffered at Fort Mackinac, Commander St. Clair burned a British schooner and left two armed vessels in Lake Huron to prevent supplies from reaching the fort. “The last word of this empty venture came late in August, when one hundred Canadian soldiers and backwoodsmen…left Mackinac in boats and…captured both vessels,” (Raddall) off of St. Joseph Island. Reclaiming what the Americans destroyed was the last significance of Fort St. Joseph. After attempting to repair and salvage the remains after the war ended in 1815, the British decommissioned the Fort in 1824.

The importance of Fort St. Joseph highlights aspects of modern military strategies and planning. Captain Roberts knew defending the British Fort would be suicide for his small Battalion with their poor location and structure. Therefore, he planned the offensive attack on the unsuspecting Americans. This also illustrates the significance of communication in military operations, as Lieutenant Hanks had received no word of the Declaration of War. Securing Fort Mackinac was instrumental in preventing American control of the Great Lakes, and possible territory in Canada. It also allowed the Native Americans, who were aligned with the British (or simply resented the colonists) to attack other posts garrisoned with American troops. In present day military affairs, the United States has bases and fortifications all over the world. The location of these bases and advanced communications give American forces an advantage when fighting battles overseas. However, in this case, British establishments during the colonial period made lasting relationships with Native fur traders, eventually aiding them in the War of 1812 against the Americans. Military strategy and positioning is an important aspect of preserving peace in foreign countries. For example, Fort St. Joseph, which was constructed less than one hundred miles from Fort Mackinac to counter an American invasion. Unfortunately, poor economic or military relations with foreign countries that possess United States bases today, have partly contributed to various conflicts towards the “intruders”. Examples include US Embassy bombings in Kenya and Tanzania, or the Iran hostage situation. The military history of the Upper Great Lakes can allow historians and military leaders to investigate the advantages and disadvantages of present day fortifications, war, and foreign policies overseas. This will hopefully lead to peace and resolution, and not another War of 1812.