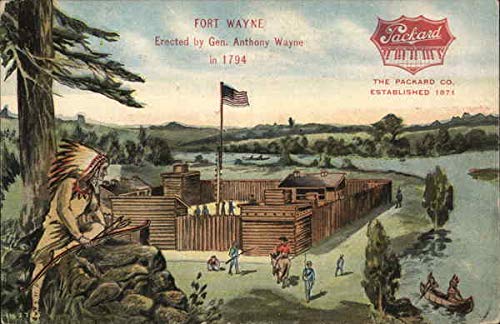 At the end of the Revolutionary War, Britain ceded its control of the northwest territory to the United States. Even though this control was under the treaty, British continued to occupy forts in the area while supporting the Natives that were living in the area. This resulted in a decade of conflict with Natives for control of the territory. It would come to be known as the Northwest Indian War, spanning from 1785 to 1795. The United States would suffer multiple embarrassing loses to the Indian Confederates. Western expansion would be nearly impossible for American settlers, until the final eviction of the Natives by General Anthony Wayne and the erection of Fort Wayne. Fort Wayne would establish United States rule past the Appalachian Mountains to land as far west as the Mississippi River. The Fort would play a key role in the protection of the westward expanding United States. Fort Wayne would establish American dominance in Indian country and open the door for western expansion.

After the revolutionary war the United States faced many struggles maintaining control over the Northwest Territory (present-day Ohio, Indiana, Michigan, Illinois, and Wisconsin). The native tribes in the area had created a confederation to protect their native land. This confederacy consisted of mostly Shawnee and Miami tribes. Even though the British had ceded its control of the territory in the treaty that ended the revolutionary war, they still had troops occupying the area. The British would not get directly involved with the United States, they would play aid to the Indian Confederates. President George Washington had sent the army to the area to reinforce US rule over the territory. The forces that were sent were made up of inexperienced militiamen. General Josiah Harmar was the first General Washington had sent to resolve the conflict. When he went west with a small force of 1,100 militia, he was defeated twice by the confederacy. Washing would then send Major General Arthur St. Clair. St. Clair had the goal of taking the Maimi capital of Kekionga. He would lead his troops into what is considered the worst defeat of the US army. St. Clair’s army would have a casualty rate of nearly 98%. Fed up with both of the debacles, Washington would appoint General Anthony Wayne to form and train a unit capable of removing the confederacy from the area (Hickman, 2018).

Anthony Wayne is most known for his contributions during the American Revolution. He led American forces against British soldiers at Stony Points, New York. He also played a major role in stopping Benedict Arnold from surrendering the fortifications at West Point to the British (“Anthony Wayne”).  In a letter written by Anthony Wayne to George Washington, Wayne accepts his appointment by Washington. He also expresses a sense of excitement to lead the force as “It’s a profession of which I am fond” and that “tactics have been my principle study at leisure hours” (“To George Washington from Anthony Wayne,” 1790). This letter foreshadows the successes that General Wayne would have against the Indian Confederacy. His excitement and determination shown in the letter are qualities that would help the United States establish their dominance over the Northwest Territory. American settlers in the area were in desperate need of protection and the new appointment of Anthony Wayne would provide it. He would train an army to remove the natives and build a Fort in his name that would effectively open the door for western expansion.

Wayne would spend most of 1793 training his troops that would earn the title of  the “Legion of the United States.” This Legion would be made up by combining light and heavy infantry with the use of artillery and cavalry. He would also separate his forces into four “sub-legions” that were all under command of their own lieutenants (Hickman, 2018). This was done so that each group of troops would be able to perform on their own. The major objective of the Legion was “to protect Anglo-American settlers from American Indian attacks and to forcibly push the native people out of Ohio Country to pave the way for expansion” (“Anthony Wayne”).  To carry out this objective Wayne would construct three forts during the Northwest Indian War. These forts were: Fort Recovery, Fort Defiance, and Fort Green Ville. He would later construct a final fort in Fort Wayne that would serve as the stepping stone to western expansion. With the erection of Recovery, Defiance, and Green Ville, Indian concerns for American activity in the area would rise. The confederacy would establish their own fort, with the help of the British, in Fort Miami along the Maumee River (Brooke, 1895). Before the Legion and the Confederacy would clash, Wayne had made two attempts at reaching a peace treaty without having to use force to remove the natives. Upon the refusal by the confederates, Wayne began to march his troops towards the Maumee River. (Brooke, 1895). The Legion would prove to be too much to handle for the Indians. The Confederacy was forced to retreat rapidly as the cavalry “drove the savages from their shelter” (Brooke, 1895). The Legion would pursue the confederacy all the way to Fort Miami where the Indians had hoped the British would offer help against their pursuers. When they arrived the forts door were closed as the British commanders did not want to start a conflict with the Americans. General Wayne would go on to order his troops to burn the Indian villages along with their crops before returning to Fort Green Ville. This would come to be known as the Battle of Fallen Timbers. This would lead to the signing of the Treaty of Greenville (Hickman, 2018). Timothy Pickering would write a letter to President Washington informing him of General Wayne’s successes. Pickering wrote, saying “General Wayne showed a copy of the treaty” and that Blue Jacket, the Indian’s great War-Chief, was present (“To George Washington from Timothy Pickering,” 1790). The letter informs Washing that peace with the Indians has been accomplished. This letter would be the first news Washington would receive of the victory of the Northwest Indian War. The official signed document had not even been received by the United States war office (“To George Washington from Timothy Pickering,” 1795).

Fort Wayne would be built where the St. Joseph and St. Mary’s rivers come together to form the Maumee. It was established at this location because it was the capital of the Miami Indians serving as a symbol of United States rule. The location would also help to protect American settlers wishing to move farther into the frontier. It was located at the main passage between the Great Lakes and the Mississippi River, by traveling the Maumee River. Prior to the building of the fort American settlers had struggled extending the nation’s borders past the Appalachian mountains. Conflict with Indian tribes had always kept the country’s westward expansion at a halt. Fort Wayne provided the protection American settlers had always needed. The American frontier would now extend over the Appalachian mountain range as far west as the Mississippi River.

For nearly fifteen years Fort Wayne would protect American Settlers helping the United States continue expanding its borders. During this time the Governor of Illinois, William Henry Harrison, would continue to advocate a policy of negotiating treaties to cease more Native American lands for American settlers. In 1810 he would propose the Treaty of Fort Wayne. This treaty would give the United States nearly 3 million acres of land in the Indian and Illinois territories (Olar, 2018). This treaty would also lead to unrest within many of the native tribes. The treaty would eventually drive America back to war with the Indians in the area. In 1811 the Tecumseh War would breakout, overlapping with the war of 1812. In September of 1812 the Potawatomi and Miami Indians would being to siege the fort. Harrison was appointed to major general in the state militia and was sent to reinforce Fort Wayne. He would bring with him over two thousand troops. On September 11th, the Winamac Indians would try one last mounted effort to take the fort. Harrison would be able to fend off the resilient attackers throughout the night. The Winamac would suffer heavy losses and would retreat back across the Maumee river the next morning (Hickman, 2019). Once situated at the fort, Harrison would begin ordering raids against the Indian tribes. He would effectively burn down the villages of Wabash and Five Medals. Harrison would remain there for the remainder or the war of 1812. In October of 1813, Harrison would win another major victory at the Battle of the Thames (Hickman, 2019). This would be Fort Wayne’s first true test of strength in the Indian country. Holding strong in both instances would solidify the fort’s ability to control the area. After suffering two major defeats the Indian tribes would reduce their attack on the American settlers on the frontier (Hickman 2019).

Fort Wayne would prove itself to be a major contributor to the western expansion of the United States. Serving as the location of many major events leading to the expansion of the country. The fort was built as an outcome of the Northwest Indian War, leading to the Treaty of Green Ville. A treaty that granted American settlers passage through Indian lands, protected by Fort Wayne in the heart of Indian country. The fort would provide protection of settlers for nearly 15 years before being the location of the signing of the Treaty of Fort Wayne. This treaty would expand the American frontier by nearly 3 million acres. It would also lead to another war with Native tribes. This was the ultimate test for Fort Wayne. Holding off tribal sieges would be the ultimate testimony of dominance over the land. The failures trying to siege the fort would be the end of decades Indian conflicts. American settlers would now be relieved of tribal raids and would be able to expand the nation’s borders further westward. Fort Wayne would open the door for western expansion and it would continue to hold the door open.