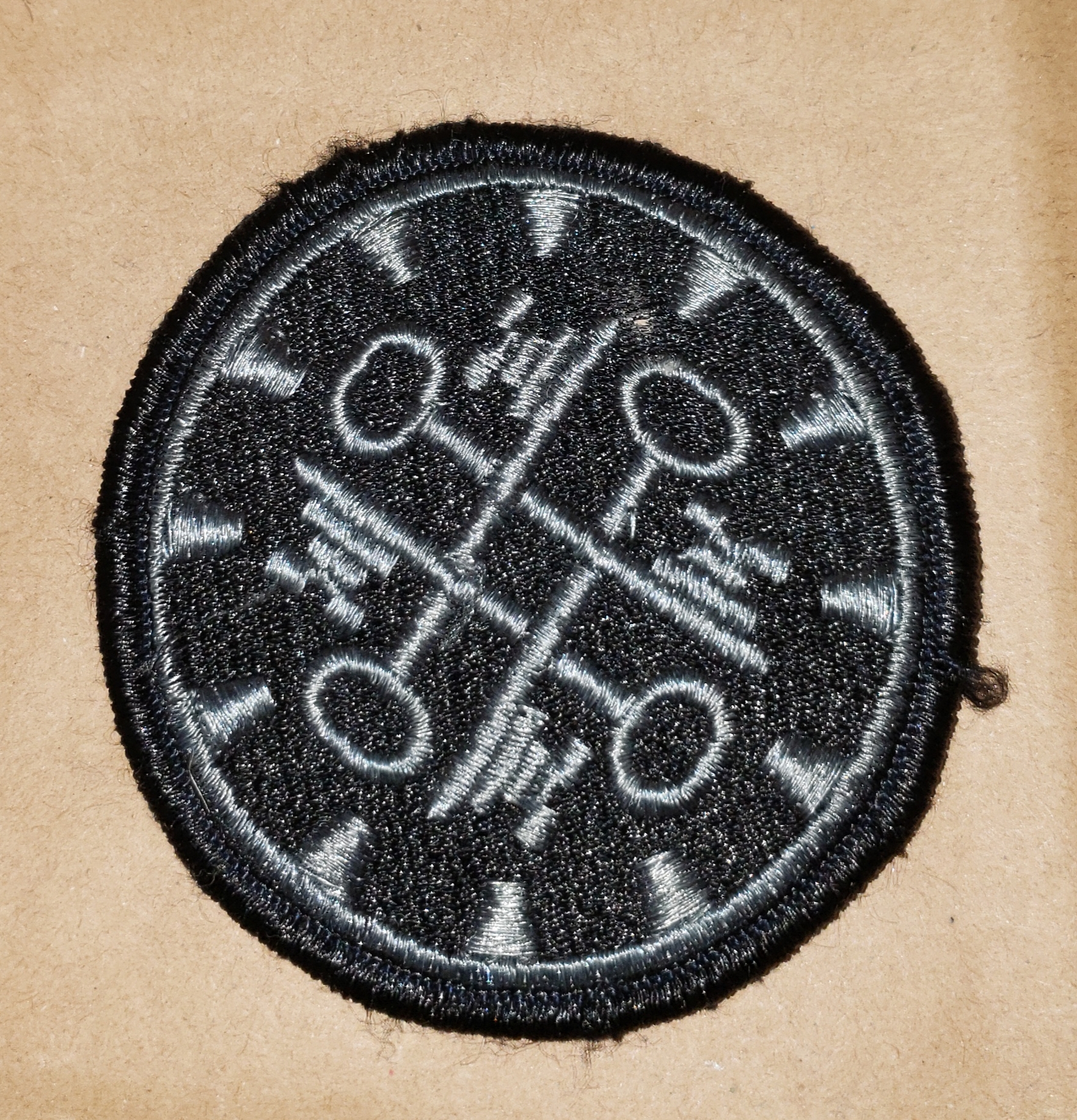 The 107th Engineers Battalion didn’t get their final designation until after WWII, to be headquartered in Ishpeming Michigan. Their motto is “Good as Done!”

In 1881, Calumet was an important mining town for Michigan, and held a lot of influence with the state. Initially, the 107th Engineers Battalion was known as the Calumet Light Guard and was a private company representing private interests. Being a private entity, the Calumet Light Guard had to pay for their own uniforms, their own weapons, their own ammunition. However, units that were part of the Michigan State Troopers, a precursor to the Michigan National Guard, had the bill for all of these things covered by the state. In an awkward first step along their patriotic history, they requested the state to admit them, so that they didn’t have to pay for these things anymore.

Come 1883, the Calumet Light Guard would be re-designated as Company H, 3rd Infantry Regiment. This would be the first of many re designations and reassignments until March 1953, when it would receive its current name of 107th Engineers Battalion.

From the Spanish American War to WWI

Re-designated as Company D, 34th Michigan Volunteer Infantry, they deployed to Santiago in May 1898.  From their deployment date in May, they would travel across the country until June 26, when they would leave aboard the “Harvard,” on their way to Cuba. After a few days of travel, they arrived at Santiago, and used the ship’s lifeboats to make way to shore. July 1st, a day after arrival, D Company was ordered to the front lines. D Company was armed with antiquated Springfield rifles, and a light artillery piece. They marched from around 10 pm until 5 am through rivers and jungle to San Juan Hill, right into the raging Spanish defense of their city. Instead of relieving the regulars who had already been fighting for a full 24 hours, they were ordered to instead provide support, laying in the “broiling sun” all day. They were positioned on a hill with no cover and concealment, save for a lone tree and knots of grass. Two privates were shot that day.

Before the night of July 2nd, they were entrenched. Around 10:30 pm, the engagement started again, with Spanish forces firing upon the entrenched D Company. Getting in position for a counter attack, they received at the last minute an order from General Wheeler to support the General’s cavalry maneuver. However, the fighting soon died out, as apparently each side thought that the other was about to attack. The following day, at 10 am, a truce was agreed upon. The next day, D Company was ordered onto road duty, building roads through the jungle. With many if not all D Company soldiers having lived their lives in the cold of Upper Michigan, the punishing heat of the jungle and the intense labor, mixed with the pestilent nature of the island is said to have killed as many men as though they had completely relieved the regulars at San Juan Hill.

Nearly every man had been reared amid the snows of Lake Superior, and to be thus suddenly sent into the blazing tropics was hardship sufficient to break down the strongest will and constitution

In 1906 they were re-designated as Company A, Michigan Engineer Corps. In June 1916, they were mustered by the federal government and deployed to Europe to advance the US war effort. Come March 1917, they were sent back home. A few months later, in August 1917 they were sent back to Europe to continue the fight. Shortly after their redeployment, they were expanded and re-designated as the 1st Battalion, 107th Engineers, an element of the 32nd Infantry Division. During this deployment, they fought in the Fourth Battle of Champagne, which led to the eventual Armistice 100 days later. In May of 1919, they were demobilized and sent home. Years after the war, in 1937, they would re-designate their headquarters, and move it to Detroit.

Prior to America’s entry into WWII, the 107th was inducted into Federal service in October of 1940. In 1942, the 107th would be reorganized and reassigned again as the 254th Engineer Combat Battalion and on August 19 1943 would be assigned to the V Corps, as the 32nd Infantry Division was being sent to the Pacific. This designation would remain for the duration of WWII.

The 254th took part in D-Day by supporting the landings of the 29th Infantry Division. Once the landings were complete, the 254th repaired roads, built bridges, cleared mines and performed a myriad of other combat engineering tasks. The 254th played a large role in helping the Utah and Omaha beach heads to link up. They were among the first units to enter Paris, playing an important role in maintaining the mobility of accompanying units. On Sep 11, 1944, the 254th became one of the first to enter German territory as well. The 254th inflicted heavy damage on German defenses during the assault on the Siegfried Line, by destroying 52 fortified positions.

Come December, the 254th would see the most ferocious combat of their history. On December 17, 1944 in the early hours of the morning the 254th were ordered to reorganize as an infantry unit by shedding vehicles and engineers equipment. The 254th will now be addressed by the companies that make it up, A, B, C Company and HQ. The Germans, led by Lt Col Joachim Peiper, were organizing a counter attack during the assault on the Siegfried Line, and were going to hit hard. Setting up defensive positions near Bullingen, Company B at 0600 took note of four flares being sent up into the barely illuminated sky; blue, white, red, white. The flares were in front of their line to the right. Within minutes, the sound of tracked vehicles began to move towards B Company’s lines.

Due to the limited visibility in the twilight, once the vehicles came into view B Company wasn’t sure of the identity of those approaching them, as it was suspected that there may be allied forces ahead of them still. It wasn’t until German shouting could be heard that the order to open fire was given. A single Panzer and six half-tracks offloaded their infantry, and pushed up to within 15 yards of the line that B Company was holding. Despite the light armament of B Company and total lack of anti tank weaponry, the Germans were repelled, taking heavy losses to their infantry. Approximately 20 minutes later, the Germans had reorganized and attempted another assault on B Company’s position. With the German tanks providing fire support, German infantry attempted to charge B Company. Again, the Germans were forced back, sustaining even greater casualties. By now, daylight was beginning to break, and the cover of darkness that B Company had been using was starting to let up.

For a third attempt, the Germans hit B Company again. This time, however, they noticed that no anti tank capabilities existed in B Company, so the tanks spread out and rushed the fox holes that B Company was in, passing over them. The number of tanks by now had increased to twelve. Three soldiers were injured from the movement of the tanks, with the entire unit remaining in their fox holes while the tanks travelled overhead. In this movement, one tank was destroyed and two were damaged. Despite this, the German infantry was still unable to overrun B Company’s position, and withdrew to hit B Company’s flank which was exposed.

B Company was instructed to withdraw, having been overrun with German forces. The entirety of the 254th was given movement instructions, with C Company fighting out of town to the north west, A Company toward Wirtzfeld, and B Company with HQ towards Butgenbach. While moving, Company B was overrun by Peiper’s tanks who were searching for fuel. With B Company captured, Peiper refueled his tanks and was able to capture a portion of C Company, who were caught in the open. They were herded back towards Bullingen, were searched, and had their valuables taken away by German soldiers. One soldier, who understood German, heard that they were to be executed.

As luck would have it, American fighter-bombers screeched overhead and attacked this very same tank column. However, wherever American prisoners were, German soldiers would take them and use them as human shields. Catching on, the frustrated fighters departed to other targets. In another stroke of good fortune, as the column began to move again they were hit with allied artillery fire, providing enough chaos for the captured Americans to flee into nearby buildings and basements. Hidden, they decided to split up, with some going to find friendly units while others stayed behind. Sadly, those who stayed ended up in either prison camps or missing.

Those that left found there way to an American infantry unit at dusk and were rearmed, now augmenting the defense there. A few days later they were reunited with their 254th Battalion, who had reestablished a line of defense near Bullingen. The line was strong, but was in clear view from the town. Once they were hit by German artillery fire at 1300, they fell back to an even stronger position that still blocked important routes to the northwest, west and north. Lt Col Pieper would then abandon this attack, and head south to St. Vith. By 1500 they were relieved by the 26th Infantry.

Delay.  Denial.  Deflection.  They held the North Shoulder for nine hours and enabled it to remain held on that spot! They denied three intended routes and significant enabling resupplies! They deflected the planned strategic direction of Hitler’s desperate attack and it never was regained subsequently! The gift of nine hours for all commanders to contain the penetration had more result than just holding the North Shoulder of the Battle of the Bulge!!!!!!! It limited the extent of the Battle of the Bulge, the largest battle ever fought by the United States Army!

The actions of the 254th in this battle earned the unit the awards the Presidential Unit Citation and the French Croix de Guerre. These awards can still be seen on soldiers’ dress uniforms today.

On December 22, 1945 the unit was deactivated and sent home. Following the war, they were re-designated as the 107th Engineers Battalion, 46th Infantry Division with headquarters in Ishpeming Michigan. This is who and where they remain to this day.

In 2004, each company was given the ability to deploy independently of the battalion. As such, the names of each company was changed as well, with A Company becoming 1431st. This applied to each company, forming the 1430th, 1431st, 1432nd, and 1437th Engineer Companies. The headquarters in Ishpeming Michigan retained the name of 107th Engineers Battalion.

The 1431st and 1430th Engineer Companies deployed to Iraq in 2004. While there, they provided support to the initial invasion force. Over the following years, each company would be deployed for purposes such as route clearing and construction of infrastructure. The last combat deployment of the 107th was in 2012, with every deployment since then being focused on training and international exercises.