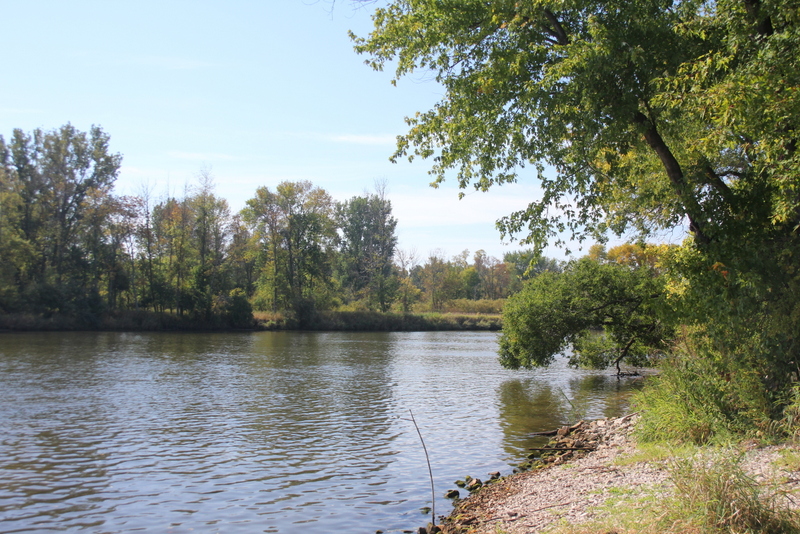 “Battle Point was the site of Fort Village and an Ottawa Indian burial ground. Research done by GVSU, MSU, Martin/Mainfort, and others suggest that the cemetery was used between 1820 and 1835. The Washington Treaty of 1836 ceded all land north of the Grand River to the United States. Enraged at the prospect, Chief Shiawassee attempted to induce tribesmen here to revolt and massacre the whites. Rev. William Ferry and Indian friends successfully defused the threat. No blood was shed at “Battle Point.” Numerous trade goods, including knives, firesteels, silver ornaments, and glass beads, were found in excavations here, but the area has since been seriously undermined by erosion.”

Relationships between Native Americans and white Anglo-Americans in southwest Michigan in the mid 1800’s were very complicated. Living in the area were primarily the Ottawa (or Odawa) Indians. The name Ottawa is said to mean “traders” and that they were. Living in Michigan, they collected and traded furs, venison, berries, deer hides, moccasins, blackberries, cranberries and much more.

“A trading tribe even before contact, the Ottawa were businessmen before they ever met a European, so they immediately recognized the opportunity presented by the fur trade and attached themselves to it and the French.”

The Ottawa people played a crucial role in trading in the Great Lakes region. They congregated in river valleys such as what was to become Grand Rapids, where they were able to paddle birch bark canoes out to the trading port in Grand Haven, on the coast of Lake Michigan.(See artist rendition of a birch bark canoe) In fact, approximately 4000 natives would congregate in Grand Rapids every spring and fall circa 1820-1830. (Tuttle, 1874)

Along the grand river in modern day Crockery township there is a tight northward turn in the river, along which the “Battle Point Site” can be found. While nowadays there is not much to see there other than a typical Michigan river bank due to erosion, there is a rich history in the archaeological discoveries found in this small river bank and in the historical context of the Ottawa people and their struggles to survive in a drastically changing America with the inflow of white Anglo-Americans. The battle point site is the location of a native american burial or cemetery. There were a total of about 20 burials throughout the site. With these remains, numerous trade goods were also recovered which includes things like knives, firesteels, silver ornaments and glass beads, some of which indicative of trade with white settlers. Based on these artifacts and other historical documents it was discovered that this grave site was used from about 1820 to 1835. This site alone revealed significant information about the culture of the Ottawa in the early to mid 1800s. About half of the burials were in wooden caskets, facing to the west, which is consistent with a traditional christian burial. This alone shows the adoption of European values and traditions into the Ottawa culture.

We often discuss the conflict between the natives and settlers, but the conflict doesn’t explain the adoption of European/Christian values into the cultural sphere of the natives. It is important to discuss the many instances of community between settlers and natives which “merged” their cultures into what we witness at the Battle Point Site and many other locations throughout the Midwest. An interview with Mrs. L. W. Lovell, a Michigan settler, blissfully highlights the neighborly relationship that many settlers depended on having with the natives.

“We could not have done without the Indians. They were our market men and women. They brought us venison, huckleberries, maple sugar and many other things that we in a new settlement needed. They were friends and very kind neighbors to the early settlers. They treated us so much like kith and kin, that we called them our “country cousins.” Although extremely backwoodish in habit and mode of living, yet we could not wish for kinder more accommodating neighbors . . . The Indians were often a great help at raisings; a log house or barn could not at times, have been raised without them.”

Teamwork and community aside, there DEFINITELY was conflict. Clashing ideals, specifically that of the idea of private property was a definitive cause for conflict. For example, a settler from Vermont named Mumford Eldred bought carefully selected land in southwest Michigan from the federal government in 1836, but conflicted with the Pottawatomie Indians (closely related and associated with the Ottawa) over the concept of private property which the natives who had been farming this land for generations did not understand. Many “un-neighborly” conflicts ensued, and these type of clashes were not uncommon, not only in Michigan but nationwide. The conflicts culminated to a climax with the signing of the Washington Treaty of 1836.

The Washington Treaty of 1836 was an agreement between the U.S. government and the Anishinaabek people (which was the collective name of the Ottawa and Ojibway tribes) with regard to land from the Grand River on up to the eastern upper peninsula. Due to the treaty, the federal government will pay for the land, and the a Anishinaabek people will be given reservation land set aside for them in northern Michigan. However, Congress modified the terms of the treaty after its signing, only allowing the Anishinaabek people to stay in northern Michigan for five years before the government has the power to forcibly remove them. When news of the treaty got back to west Michigan, many natives were outraged! Which is where the Battle Point Site comes back into the picture.

Chief Shiawassee was outraged with the result of the treaty, the federal government, and the encroaching white settlers, along with many of his fellow tribesmen. He called for a meeting between the Ottawa Indians at the Battle Point Site to organize a massacre of white settlers. Rev. William Ferry defused the threat. There was never actually a conflict at Battle Point.

However, due to the recession that lasted just short of a decade beginning in 1837, westward advancement of white settlers slowed significantly. As a result, the forcible removal of the Anishinaabek people by the federal government set in place by the Washington Treaty of 1836 never took place, but neither did the reservation of land for the Natives. Over the next century, the Ottawa people were pushed aside by the white settlers. Little remains of their lost culture that had an imperative impact on what was to become the Midwest.