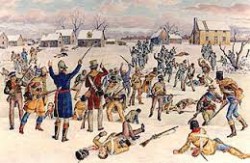 General James Winchester was one of the leaders during the Battle of the River Raisin during the War of 1812. He led his men from Kentucky to Michigan during the harshness of winter and when his men arrived at Frenchtown, they warded off the British and Indians. The Americans were unsuccessful in the attempt to cut supply lines from Canada to Michigan that supplied the Indians.

There were two battles fought; the first was a small victory for Winchester’s men and the second was a gruesome defeat for the Americans along with the Massacre of the unarmed by the Indians a day after the battle. About one thousand American men fought at the River Raisin, but only thirty-three returned home; Winchester was not one of those men.

Summary: Battle of the River Raisin

The Battle of the River Raisin, also known as the Battle of Frenchtown, was the largest and bloodiest battle in the history of state of Michigan [12]. The battle happened in 1813 during the War of 1812. These Americans were fighting the British and their Native American allies because the British were supplying the Indians with weapons and other supplies. The Battle of Frenchtown which took place in what is now Monroe,  Michigan in particular was a bloody battle and a victory for the British because of the Americans’ lack of readiness and awareness. After the battle of the River Raisin, the Indians who were allied with the British massacred the wounded American soldiers which enraged the Americans [12]. This caused more troops to be sent and eventually take Frenchtown for Americans. As for the War of 1812, the war ended with a negotiated peace treaty and with no clear winner.

Brigadier General Winchester was captured twice in the Revolutionary War by the British [8]. When the War of 1812 began, he was not liked by his men and was not allowed to be in charge of the entire army in the Northwest. He was in charge of leading a militia group from Kentucky to Frenchtown to defend it from the British [5].

American General Winchester was in charge of 934 troops who were originally sent to Frenchtown, Michigan (now known as Monroe), from Virginia by Major General Harrison to take back Detroit from British control [10:168]. General Winchester won the first battle of Frenchtown however was taken by surprise which led to his defeat. On January 21, 1813, 597 British soldiers accompanied by 800 Indians set up a camp not far from Winchester’s men.  On the morning of January 22, the British attacked the city of Frenchtown. It was not long until Winchester offered to surrender due to being outnumbered and losing men quickly. There were over three-hundred casualties for the Americans and about five-hundred captured by the British [12].  The next day, January 23rd, the Indians allied with the British burned houses and scalped the wounded American soldiers as well as other civilians in the town [11]. The estimated number of deaths from this attack was about thirty. This massacre caused a huge outcry to retake Frenchtown and sparked the rally cry “Remember the Raisin.”

The next day, Winchester tried to recapture Frenchtown but he was already losing before starting the attack. The British Commander, Colonel Proctor, killed hundreds of Winchester’s men. The two men settled to an agreement to stop the killing but the Native American Indians were massacring Winchester’s men as well as the people of Frenchtown. Winchester did not escape with his men however. He was imprisoned in Canada for over a year, but was released and served out the rest of his live as a state commissioner, which meant he patrolled the boarders of Tennessee and Mississippi. After the War of 1812 ended, Winchester helped discover Memphis, Tennessee [13].

James Winchester was born in the state of Maryland in 1752. He grew up with 10 siblings, one of whom he became very close with, his brother George [9:79]. The two brothers both joined the military in 1776 during the Revolutionary War. Very early in his career, James was taken prisoner in the Battle of Long Island in 1776 and released a year later. After his release, he continued to fight in the Revolutionary War alongside his brother. During conflicts with the Native Americans, James was appointed Captain of the Horse in Sumner County, state, and also became Lieutenant Colonel Winchester of Sumner [9:80-81].

The Battle at Sumner in 1789 was the most gruesome collection of battles he encountered so far.  His brother, Deputy George Winchester, died in the ongoing battles near Sumner at the age of 37. This however did not hinder James’ performance. James had excellent tracking abilities. He was able to track down an Indian trail, which  gave them an advantage against the Indians. After successfully defeating the Indians, he was appointed Colonel [9:80-82]. President George Washington personally appointed Winchester as a member of the Legislative Council. He was later appointed the Speaker of the House in 1796. He continued with that job until he signed up for the Army in 1812 at the beginning of the War of 1812 [9:83].

The attack was unsuccessful because the Indians had the supply lines to the British well-secured, and the Americans were unable to defeat the British and Indian forces. Later in 1812, the British controlled Detroit and Frenchtown.

A supply train from Frenchtown was able to escape and retreated to the South where it informed Kentucky of the crisis in Michigan and called for help. General Winchester received word from the North to help General William Hull and to meet up with Harrison and one other army in Wayne, Ohio to make further plans. Many men from Kentucky were fired up about the idea of fighting Indians. However, the men in Winchester’s group were not prepared for the harsh weather of the north and would soon realize their lack of preparedness [7].

When Winchester met up with Harrison in Sandusky, Ohio, Harrison gave the orders for Winchester to move to the right of Maumee river up to Detroit. While on the journey, Winchester’s men suffered greatly from struggles such as disease and starvation because they lacked warm clothing, shoes, and supplies. Where Winchester camped was called Fort Winchester but in an account from Winchester he said it should be called “Fort Starvation” [7]. He sent word for his soldiers to receive proper attire in order to continue onward.

In 1813 Winchester received word that there was trouble in Frenchtown and that the people there were in need of help. Winchester’s men were fired up once more because of their early encounter with Indians. Winchester’s men crossed the frozen River Raisin and won Frenchtown over on January 18th. The town was used as a pit stop for Winchester’s men on their way to Detroit [6:194]. Many men stayed in the fenced-in town while others stayed outside the fence. Winchester positioned himself across the river away from his men with the ammunition reserve [7]. This victory however would not last long. General Proctor [15] of the British was angered by the defeat in Frenchtown and set up an attack [6:196].

Early on January 22,  Proctor moved his army, 500 British and Canadian militia and around 600 Indians, to the outskirts of the town. This was a tactic that was well thought out and ensured British victory. For more information seeTactics of the Battle of the River Raisin [18]. They attacked early in the morning with cannons and fired ruthlessly at the Kentucky men who were not protected by the fence. After a hardy effort from his men, General Winchester was captured by the British and was forced to surrender.  His men did not listen because if their drive and the uncertainty of the general’s command to surrender due to being captured [6:196-198].

A testament from James Winchester to the Secretary of War in 1813:

“At this place, I understood that our troops were defending themselves in a state of desperation, and was informed by the commanding officer of the enemy, that he would afford them an opportunity of surrendering themselves prisoners of war; to which I acceded. I was the more ready to make the surrender, from being assured, that unless done quickly, no responsibility would be taken for the conduct of the savages, who were then assembled in great numbers. In this critical situation, being desirous to preserve the lives of a number of our brave fellows, who still held out, I sent a flag to them and agreed with the commanding officer of the enemy, that they should be surrendered prisoners of  war, on condition of being protected from the savages, allowed to retain their private property, and having their side arms retried to them.” – James Winchester [3:78].

Eventually Proctor and his men agreed to prevent the Indians from murdering any prisoners and the wounded prisoners  were allowed to seek shelter. In turn, Proctor promised the Native Americans that on their way out the next morning, they could pillage the town [7].

Winchester was not one of the freed thirty-three men. After being striped of his general’s coat, he became a prisoner of war under the British. He was held in Canada for a year until he was later released in an exchange between the Americans and Canadians [13].

The next morning, on January 23, 1813, the Indians began to obliterate everything. They burned houses, farms, and people. People were dragged from their quarters and slaughtered. Many were wounded soldiers were scalped and pillaged by the Indians. Elias Darnell, a solider from the Battle of Frenchtown stated,

“My feeble powers cannot describe the dismal senses exhibited. I saw my fellow soldiers naked and wounded, crawling out of the houses to avoid being consumed in the flames. A number, unable to get out, perished miserably in the [unrelenting] flames of the houses…“ [2].

The snow was dyed red with blood and the bodies were left to be eaten by boars. From this tragedy both from the River Raisin Massacre [16] and the battle from the previous day, only thirty-three men escaped, the rest were prisoners or dead. The final outcome of Frenchtown resulted in the deaths of twenty-four British, 397 Americans, and many Indians [6:200]. After the thirty-three men arrived back in Kentucky, people were outraged by the events in Frenchtown. A new battle cry arose in the south, “Remember the Raisin” [14].

After being released from Canada, Winchester resigned his position as general and was in charge of the lines between Tennessee and Mississippi [8]. He retired and died in 1826. Detroit was later retaken by the Americans later on in the War of 1812. It became headline news throughout the nation and angered thousands of Americans.

Harrison could have gone with Winchester up the River of Maumee instead of holding base in Sandusky. This would have resulted in more troops, resulting in the likely defeat of the British. However, simply supplying Winchester’s men properly could have saved hundreds of men from the hardship of winter.

Today, Frenchtown has become the city of Monroe. There is a memorial located at the battle site remembering all the soldiers and civilians who were brutally murdered in the battle. There are nine counties in Kentucky named after people who have died in the Battle of Frenchtown [7].