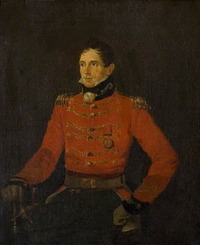 Robert McDouall was a military officer for the British who was best known for his command of Fort Mackinac from 1814 to the end of The War of 1812. During this time, he successfully fended off an American attack on the fort and held it in firm hands until the Treaty of Ghent surrendered the fort back to the Americans. Robert McDouall was born in 1774 in Scotland where his parents initially wanted him to become a merchant. However, his strong desire to become a part of the British military eventually led him to join a British foot regiment. He saw a lot of action during this time as he moved up through the ranks and was eventually transferred to Canada. During the War of 1812 he was assigned as Commandant of Fort Mackinac after the Americans surrendered it to the British. (Mcdouall, Robert, 1988)

Capture of Fort Mackinac by The British

At the start of the War of 1812, Fort Mackinac, which was sometimes referred to as Fort Michilimackinac at the time, was under American control held by an estimated 60 men led by Lieutenant Porter Hanks. While the British nearby knew that the war had started for nearly a month, “the garrison at the fort was unaware of the declaration of hostilities by the United States government.” (Chicago Daily Tribune, 1942). Not only were the Americans unaware and therefore unable to prepare as adequately as necessary to defend themselves properly, but they also were vastly outnumbered by the British, enemy Indians, and Canadians. According to the Chicago Daily Tribune in 1942 the British side had “46 regulars of the 10th Royal Veteran Battalion, 260 Canadians, and 715 Indians” against the Americans meagre 60 odd men and a small amount of Indian support. The North-West Company’s brig Caledonia, 10 batteaux, and 70 canoes along with two cannons. As can be seen by the map of Mackinac Island the British came in on the north side opposite of where the fort is in order to get behind it. The two cannons were then set up on a hill behind the fort on the east side of the island, which is where modern day Fort Holmes is located. In the end, the Americans ended up surrendering the fort to the British due to the helplessness of the situation for them.

The value of the control over Fort Mackinac at the time could not be overlooked. It gave control of the Straits of Mackinac which led to control over the fur trade in the Great Lakes. The fort overlooks a 150-foot bluff over the straights and the rest of the island was covered in heavy forest which housed Indians most of whom were friendly to the British. McDouall himself has stated that the fort is “strongly situated and being capable of making an excellent defense” (McDouall Correspondence, 1896).

Robert McDouall and his Royal Newfoundland Fencibles, who were a party of craftsmen and soldiers, ventured out from Canada in the middle of the winter in order to reach Fort Mackinac with important supplies.  Once he reached the fort and command was given to him, one of the first things he started doing was improving the defensibility of the Island. One of his first projects that he completed was the building of Fort George, now known as Fort Holmes, at the highest point of Mackinac Island. Its purpose was to help defend Fort Mackinac from eventual United States attacks. It never operated as its own fort; it was always dependent on Fort Mackinac for its operations. This ended up being vital defense of the island because shortly after McDouall took command Americans had already started taking control over land near Mackinac Island which would inevitably lead to a battle. Another thing that McDouall had to act on soon after he took command was when he learned that the United States forces had taken control over a post on the northern end of the Mississippi. He knew that if the Americans retained control over this area that a large amount of Indian support would be lost. His response was to send a force under William McKay to retake the post. The risk he took in doing this, however, was Fort Mackinac’s garrison became diminished and there was concern that American forces were planning an attacking the island. (McDouall, Robert, 1988)

The Battle of Mackinac Island was the biggest event that took place under McDouall’s command of the island. The American goal of wanting to recapture the fort was to cease the fur trade between the British and the Native Americans. They planned to use the same method the British used, by going through the forests after bombarding the fort with the ships before the battle. The bombardment was not successful at all due to the bombardment being unable to reach above the 150 foot bluffs the fort was upon, so minimal damage was caused by this. Not only this, but dense fog forced the ships to back off for a week after the bombardment. When they returned they went around the island to the forest side. However, they threw away any element of surprise that they had by bombarding the forest to try to flush out any natives hiding in the forest. Rather than having his forces stay in the fort McDouall sent most of them to a clearing just outside the forest to wait for the American advance and when the Americans emerged they were easy pickings for the British. As the Americans tried to maneuver into better positions, they were also ambushed by Indians, taking heavy casualties. At this point they were put into a panic and retreated to their ships. During the battle the Americans also lost their Major Andrew Holmes in the fighting, while the British took virtually no casualties. (History of Fort Mackinac, 1920)

The death of Holmes led Fort George to eventually be renamed into Fort Holmes. A letter written to Colonel Croghan, the commander of the American forces, by McDouall showed that the aftermath of the battle was carried out honorably. He informed the American Colonel that “the wounded of the United States troops left upon the field … have been brought into the garrison, where they have received the requisite medical assistance, and received every … attention and comfort which their respective cases required” (McDouall, 1814). This showed after that battle McDouall was extremely honorable and graceful in his victory over the American forces. He also said in the letter that the body of Holmes, who was killed by the Indians, could regretfully not be recovered which prevented him from “being interred with those military honors which were so peculiarly due to his rank of character” (McDouall, 1814).

Despite the success the Indians had in fending off the Americans, McDouall did not like working with them and his reliance upon them. He complained that they “will do as they like and in action it is impossible to form any previous judgment, whether they will behave well or ill, or are disposed to fight or not” (McDouall Correspondence, 1896). This means that they are an unreliable ally to depend on to him. One example that gives merit to his concerns is during the battle while Americans were advancing along his left flank, the Indians never attempted to stop the advance even though he was expecting them to. After the battle, it became is objective to remove his reliance upon the native population. He had information that told him that the Americans would keep coming back with greater numbers until they retook the fort, so he became nearly desperate to get reinforcements from the British Army. He made claims that “the present garrison is entirely inadequate to the defense of the island which has now assumed a degree of importance which it never had before and which would be productive of most serious consequence were its safety and due security be neglected” (McDouall Correspondence, 1896).

After the attempted American assault on the island, the fort did not see any action for the remaining duration of the war. However, there were more minor occurances in the surrounding area of Mackinac Island. After the British lost their base at Nottawasaga Bay, the Americans used ships to prevent the fort from receiving supplies. When rations were getting crucially low, however, the Royal navy showed up at the right time to relieve the supplies. The American blockade was then destroyed and their ships captured. McDouall held the fort until the Treaty of Ghent which, much to his detest, surrendered the fort back to the Americans in the Spring of 1815. Despite his successful track record, McDouall was never put into action again. He eventually retired with the rank of major-general.