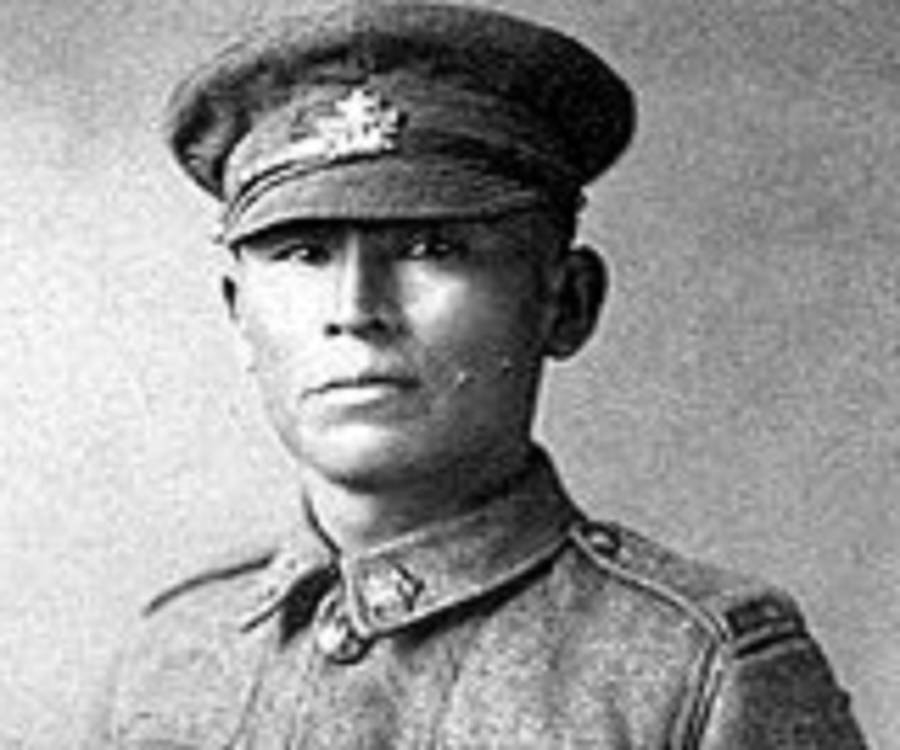 Published 13 October 2019 by Will Glaser

Francis Pegahmagabow is a native Canadian who was born in 1889 on the Shawanaga First Nation reserve, north of Parry Sound. Being that he was a native, he was exempt from the Canadian military draft at the start of the war, but enlisted immediately anyways. He wanted to go to war as a way to make his mark as a warrior, much like his ancestors [5.] Upon his enlistment, he was assigned to the 1st Canadian Infantry Battalion, commanded by Frederic William Hill. From the first time they met, Hill was sure Francis would be an excellent soldier. Francis’s enlistment also caught the attention of William Ireland, the editor of the Parry Sound North Star newspaper, who said this about his enlistment: “His grandfather was a warrior and chief and fought for the British in 1812, so the bot comes by his fighting instincts from a long line of ancestors who fought in the Indian wars. We are all hoping Francis will distinguish himself as his forefathers did and will return home covered with glory and medals. His example might well be followed.” In September of 1914, his battalion was sent overseas to be trained in England, where Francis would become known as “Peggy” among his comrades. In February of 1915, after completing their training, the 1st Battalion was sent to St. Nazaire, where they would hold the line at Armentieres [2.]

In April of 1915, The 1st Battalion would relocate to the Ypres Salient to take part in the Second Battle of Ypres.  On April 22nd, the Germans would unleash nearly 6,000 canisters of chlorine gas onto the field, where a light wind would carry it to the allied trenches. This would mark the first time in history that the Germans used chlorine gas as a weapon in the war, and it resulted in half of the 1st Infantry being wiped out in just 3 days.  The following morning, a counterattack was planned, and the Canadian 1st and 4th Battalions would attack alongside 8 British divisions. After a full day of fighting and advancing, the Allies came to rest and dug in 600 yards from the German line. [2.] After the battle was over, Francis was promoted to Lance Corporal. In regards to his performance in this battle and the battles that would follow, he received a commendation from a commanding officer that reads “For continuous service as a messenger from February 14th 1915 to February 1916. He carried messages with great bravery and success during the whole of the actions at Ypres, Festubert and Givenchy. In all his work he has consistently shown a disregard for danger and his faithfulness to duty is highly commendable.” [5.]

Francis was a firm believer in the native customs of his tribe. During combat, he would often chew a dead twig, believing it would provide protection in times of danger. His comrades took notice to his customs and rituals, and some followed his leads, believing they too would be protected [1.] His comrades would also occasionally ask him to perform rituals to try and gain assistance from the gods. In one instance, when rain and mud were halting an advance, a fellow officer gave Francis some tobacco, used by the Ojibwa for ritualistic proposes, and asked if he could do anything to improve the conditions. Francis obliged, and invoked the sky spirits for pity. Moments later, the rain slowed and the sky brightened, gaining Francis somewhat of a following. Another similar instance occurred during a mustard gas attack, where death seemed imminent. A general give Francis a cigarette, and asked if he could do anything to help them survive. Lighting the cigarette, Francis invoked the spirits of the wind, asking the wind spirits of the east to prevent the gas from advancing, and asked the western spirits to redirect the gas. Remarkably, the winds changed, and the gas blew back towards the German trenches. [3.]

As the war raged on, Francis started becoming more and more well known among his fellow soldiers due to his sharpshooting skills and his bravery for the scouting missions into no man’s land that he performed. In fact, Francis would more often than not opt to work alone on scouting missions, going out at night by himself to collect information on the enemy. A comrade of his had this to say about Francis: “…Pegahmagabow went looking for it [danger]. He preferred to work alone, in the dark, even infiltrating an enemy trench to stand among its occupants for the fun of it.” [1.] He also began to perfect his ability as a sniper, becoming a one of the 28 Battalion Snipers in his battalion. These elite few would gather information along the entire front line, including artillery and mortar activity, machine gun and sniper emplacements, movements, and overall defensive capabilities [2.]

In November of 1917, the 1st Battalion would return to the Ypres salient after having moved around to assist in various assaults and defenses, of which there was no particularly notable action on Francis’s behalf, other than his now usual scouting and sniping duties. Here, they would assist in the Battle of Passchendaele, a slow crawl towards a heavily defended German position that had been going on for months. Shortly before arrival, Francis was promoted to corporal, and used his rank to take charge of the situation, relaying messages to different units and guiding lost reinforcements to their designated position on the line [2.] His efforts and success earned him the following commendation for his work: “At Passchendaele Nov. 6th/7th, 1917, this NCO did excellent work. Before and after the attack he kept in touch with the flanks, advising the units he had seen, this information proving the success of the attack and saving valuable time in consolidating. He also guided the relief to its proper place after it had become mixed up.” [5.] Once his battalion had successfully captured the German line, they found themselves under heavy friendly artillery fire. Their advance had been covered by a creeping artillery barrage, which was now raining down on them even though they had overrun the German forces. In 1934, Francis recalled this about the situation: “At our objective we suffered very heavy from our own gunfire, I done all I could do to stop it by reporting to our C.O., Sparling, and the artillery observers. My comrades going up in pieces, shell after shell…At daylight cannonade was still going strong. Presence of mind came to me. I had a flare pistol with me. I shot a white flare. Millions of eyes saw it. It should have been fired when we reach our objective anyway…The moment I shot the flare, field guns cease fire.” [1.]

On August 8th, 1918, the 1st through 4th Canadian Battalions would take part in the Amiens offensive. The 1st Battalion was held in reserve, while the other 3 made the assault. The following day, the 1st Battalion would assist in capturing the villages of Beaufort and Folies. This operation yielded a front line advance of 8 miles, and a large capture haul. The battalion captured a total of 16 machine guns, 2 anti-tank guns, 2 mortars, and 5,000 prisoners. 22 days later, the 1st through 3rd battalions would take part in The Battle of the Scarpe [1.]

The Battle of the Scarpe opened on August 26th, with the designated Canadian battalions joining 4 days later. On the 30th, they attacked at 4:20 a.m., advancing through heavy machine gun fire. At 9:20 a.m., the 1st Battalion reported their objectives had been obtained, before being counter attacked a couple hours later [2.] This counterattack would be another one of Francis’s defining moments, as shown in his commanding officers commendation: “During the operations on August 30th, 1918, at Orix Trench, near Upton Wood, when his company were almost out of ammunition and in danger of being surrounded, this NCO went over the top under heavy MG and rifle fire and brought back sufficient ammunition to enable the post to carry on and assist in repulsing heavy enemy counter attacks.” [5.]

Unfortunately, by this point in the war, Francis had taken a heavy mental and physical toll. In September of 1916, Francis was hospitalized for a bullet to the left leg, and sent back to England to heal. His condition was apparently bad enough that his doctors considered amputating the leg, however that never came to happen. In December of 1917, Francis fell violently ill with pneumonia, and was again sent back to England, where he spent several months recovering. On September 12th, 1918, Francis was sent to a field hospital to have his mental state assessed, after numerous altercations with superior officers, including holding a medical officer at gunpoint, believing the officer was a German spy. In November, he would be sent back to England for a third time, where he would be moved from hospital to hospital as doctors tried to figure out what was wrong with him. On the 11th, the armistice was declared, and Francis was diagnosed with “exhaustion psychosis.” Finally, in April of 1919, Francis was released from a Canadian military hospital to return to civilian life at last.

Over his extensive military career throughout the entirety of World War 1, Francis had quite the impressive service record.  He had racked up an unparalleled 378 kills and 300 captures, making him one of, if not the most effective sniper of the war. On top of that, he had received a multitude of awards, making him one of the most decorated Canadian soldiers of the war [4.] His most impressive award was his Military Medal, which he had 2 bars on. This medal was given out to those who had shown exemplary service and bravery, with only 38 other Canadians achieving such a high prestige. He first earned the award for his actions on the Ypres salient in the first year of the war, being one of the first Canadians to receive the medal. Then, his valiant actions in the Battle of Passchendaele earned him his first bar on his medal. His ability to coordinate his front line and guide lost reinforcements proved to his superior officers that he was worthy of the award. His second bar came from his incredible bravery in the Battle of the Scarpe and his deliverance of ammunition from No Man’s Land, proving once again his fearlessness in the face of death [2.] In addition to his Military Medal, Francis received a few other medals for his lengthy service. He was awarded the 1914-15 Star, a medal given to those who took part in the opening of the war; the British War Medal, which was given to those who completed 28 days of mobilized service; and the Victory Medal, which was given to those who had earned the 1914 or 1914-15 Star and British War Medal [6.]

Francis Pegahmagabow fought throughout the entirety of World War 1, and proved time and time again his bravery and skill on the battlefield. Hid contributions to the Battle of Passchendaele and the Scarpe were crucial to the Allies abilities to win those fights. In addition to his unparalleled willingness to face danger, he proved himself to be expertly skilled with a rifle, and especially with one as reviled as the Ross Rifle. A man with a service record as exemplary as Francis’s deserves to be recognized and remembered for his actions. On June 21, 2016, a bronze statue was erected in his honor, with a Ross Rifle over his shoulder, an eagle on one arm as a call to his spirit animal, and a caribou at his feet to signify the Caribou Clan he was a part of. It now stands in Parry Sound [7.] In 2019, a Swedish metal band named Sabaton released an album centered around World War 1 titled The Great War, which features a song about Francis named A Ghost in the Trenches. With these artifacts and the books and webpages dedicated to Francis, he shall live on in memory and avoid the fate of being forgotten.