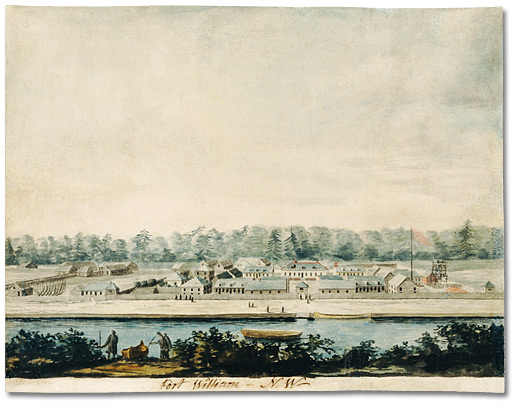 Fort William, built near the mouth of the Kaministiquia River, on played a key role in the history of commerce on the Great Lakes. Supporting the British, and earlier French, fur trade and served to connect the Great Lakes to territories in the Northwest. The location was shaped by politics of the time through: national rivalries, business competition, and war. The consequences of those politics have played a fundamental role in shaping the region into the contemporary city of Thunder Bay, the most populous city in Northwestern Ontario.

Fort William shares its location with two earlier French trading posts, both called Fort Kaministiquia (written at the time as “Camanistigoyan”). The first founded by the French solider and explorer Daniel Greysolon, Sieur Dulhut in 1679 or 1683. The fort served as a base for exploration that allowed the French to extend westward further than any previous European settlement in North America. This allowed them to continue the search for a Northwest passage to Asia, extend the fur trade, and intercept Native Americans fur trappers from trading with the British at Hudson Bay. Despite this, the fort’s strategic importance was short lived. After the French successfully seized control of the British posts in the Hudson Bay eliminating British competition from the area resulting in the fort’s first closure in 1696.

The pendulum of control swung back quickly due to warring powers in Europe. With the end of the Spanish War of Succession (1701-1714), under the Treaty of Utrecht, France was required to consolidate its force in North America and return control of the Hudson Bay back to the British. The loss of the Hudson Bay forced the French to return to their previous strategy of westward exploration through the Great Lakes in order to secure the Native American fur trade from the British. A new Fort Kaministiquia was built in 1717, becoming the base of France’s western presence.

It was during the time period that the French further explored the options for a western water route. The Kaministiquia was a difficult option as large waterfalls and cliffs made portage a dubious process. The initial voyage up the river in 1688, by Jacques de Noyon, returned down the Pigeon River in an “ominous sign of Fort Kaministiquia’s future”. The French eventually settling on the Pigeon River, which traveled further and was more easily navigated when accessed by a land route through Grand Portage. Though approximately 50 miles South of the Kaministiquia River the French continued to use Fort Kaministiquia as their primary base in the West up until the end of French control in Canada. Following French and Indian War (1754–1763), the lands east of the Mississippi were ceded to Britain and with that Fort Kaministiquia was ultimately abandoned and burned sometime after 1758. Marking the end of an era of French fur trade in the Great Lakes region.

Following Britain’s acquisition of New France, the fur trade resumed as before only under British control, and primarily by the Hudson Bay Company. When it came to Lake Superior, British traders generally settled on Grand Portage as a base of western trade rather than the Kaministiquia River. Although one Hudson Bay Company trader, Thomas Corry, did continue to utilize the area near Fort Kaministiquia’s ruins. There he traded liberally with the Ojibwa population who originally migrated there to trade with the French.

The American Revolutionary War interrupted the uncontested trade monopoly held by the Hudson Bay Company. Bringing with it competition from American colonists fleeing to Canada. This was motivated by both loyalty to Britain and by commercial interests. Merchants relied heavily on British trade for manufactured goods and British demand for North American furs. The influx of expat American merchants helped encourage the formation of the Montreal based North West Company in 1779 in an attempt compete with the Hudson Bay Company.

The North West Company was restricted from utilizing trade routes through the Hudson Bay due to existing agreements between the HBC and the British Government. Putting the North West Company into a familiar situation as the French before them. Having to rely on westward exploration and building strong trade relationships with Native Americans throughout the Great Lakes’ waterways. Despite setbacks the company was formed at a fortuitous time (only for the NWC) as in 1782 a small pox epidemic among Native American Tribes of the Great Lakes region shifted the power balance towards European traders. At the same time the French Navy razed a HBC fort along the Hudson Bay. Thus showing the complicated relationship between the commerce of private companies and their organizing governments during this period.

In the Great Lakes, the North West Company based their western operations in Grand Portage. They, as the French had, discovered it to be the best location for further exploration west up the Pigeon River. However, that location became a political issue for British traders following the conclusion of the American Revolution. The Jay’s Treaty, signed in 1794, required British military posts be moved off United States land by 1796. The northern border of the United States was set along the Pigeon River, north of Grand Portage. It is unknown if the British who agreed to these terms were aware that the Pigeon River was only accessible from Grand Portage, the Lake Superior entrance blocked by waterfalls and steep cliffs. With the removal of British military security, and threat of American taxation for foreign goods British tradesmen were forced to find a new location to operate from.

Settling on the Kaministiquia River as despite shorter, and less traversable route. It provided an entirely British controlled waterway to the West that could be joined to the Pigeon River further along by land. The British secured an agreement with the Native American Tribes to build along the shore of the Kaministiquia. To the confusion of the Natives Americans who did not understand why the United States should have any say in land that was rightfully passed to them from their ancestors. An agreement was ultimately made thus beginning the construction of Fort William by the North West Company. The fort was named in reference to the head of the Company William McGillivray. The fort allowed the company keep their western position and maintain supply routes to its Northwestern British forts.

Fort William served a number of purposes in addition to facilitating the transport and trade of furs such as: warehousing trade goods, food, and supplies. Servicing and manufacturing tools as well as building small row boats and canoes. It provided agriculture, lodging, social activities, and equipment to company personnel and operated as a trading post to Native Americans. It was also the Company’s inland office and hosted annual company meetings. While the fort had little military function it served to show British dominance over local Native American tribes. It was also suggested that a garrison of troops should be built at Fort William in order to defend the British territory from the threat of attack from the United States. However, these plans never materialized.

The End of Fort William

After nearly 20 years of operation Fort William began to decline in strategic importance. As it was for the French, the location was was most useful to the North West Company while it lacked access to the Hudson Bay. That changed after the North West Company and the Hudson Bay Company merged in 1821. Primary operations moved from Lake Superior to locations closer to the Hudson Bay. Even without the merger the Fort would have likely encountered a similar fate with advent of railroad making water travel less necessary. In 1881 the company official closed Fort William for that very reason. Those remaining in Fort William area would later come to incorporation as a town in 1907, and later renamed the town to Thunder Bay in 1970.