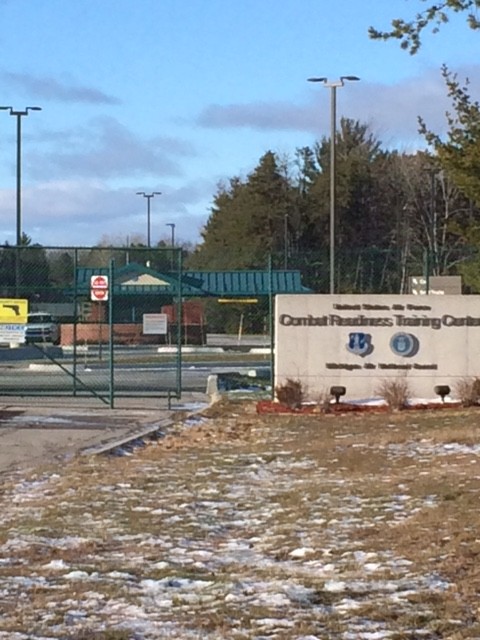 Alpena Combat Readiness Training Center is an isolated air strip in northern Michigan 7.4 miles west from the town of Alpena. It has an immense amount of historical significance. Formerly Phelps Collins Air Field, it was an airport that was taken over by the government to serve as a training center during World War II.

Tucked into the northern Michigan woods, just west of the town of Alpena,MI lies an Air National Guard base. It became the first state-owned airport in 1931, and has served as an airport for over 85 years. It has transitioned from airport to military base and back and forth as the country needed its service. Now it trains the National Guard, taking advantage of its structures from war time use.

The start of World War II in 1939 and with conflicts across the Atlantic escalating the United States was pushed to prepare for War. This initial preparation is where the Alpena Combat Readiness Training Center (ACRTC) got its first taste of military use. At the time it was state-owned Phelps Collins Airport, named after a WWI pilot from Alpena, the first American pilot casualty of WW I [2].  Despite being only a bare bones airport with few amenities 1940 saw 400-500 men from Selfridge Air National Guard Base training there in Seversky p-35s. In 1941, the plane selection was expanded to P-40 Warhawks and Lockhead P-38 lighting fighters. However, it was 1942 that brought the most extensive change to the air field. Since the United States had entered the war the need for more training centers was evident. The war assets seized the airport and put a $5 million project into place. Accommodations for 2,500 men were built, extensions from the local railroad where brought through the base, and three runways where built, increasing the total size of the base to 2,500 acres. These renovations turned Phelps Collins Airport into Selfridge No.4 [6, pg.48]. The two jobs of the base were initially planned to train new Army Air Forces cadets, and also be ready to defend the Soo locks in the event of an attack [1].

The main job of the base was to train new pilots and ground personnel as well. The need for pilots and the personnel was great, so curriculum and training of the AAF cadets changed drastically through the course of the war. First, prospective cadets had go through pre-flight training. The time frame started at four weeks and by the end of the war it was up to ten weeks of training. However, for the majority of the war it was a nine-week course. The material covered also saw curriculum shift. The beginning of the war saw a large focus on only technical and hands-on learning [3, pg.547-560]. However, once the nine-week program was put in place the curriculum focused more on mathematics, target identification, photography, and meteorology. The pre-flight training consisted of five hours of academic training, and six hours a week of physical exercise along with other basic military procedural instruction. The government even set up a program with colleges to do some pre-flight training [4, pg.37]. For flight training the necessity for men also drastically reduced the time for pilot training. Prewar flight training was a twelve month program, but due to the start of the war the flight training was reduced seven months. The stages of the training where primary, basic, and advanced, followed by a transition stage the focused on assignment specific training. The non-pilots also went into a training for their specific discipline, whether it was flight engineer, turret operator, or radar operator.  The flight engineers, pilots, and turret operators often came back together for their transitional stage to operate the plane together [3, pg.566-568].

Training at the base was originally thought to be one of the base’s primary jobs, however the base never reached its full capacity of 2,500 men. It did still train hundreds of pilots throughout its military operations. It just never reached the thousands mark that was set forth by the barrack’s size. The pilots stationed there for defense, luckily, also never where called into defend the Soo Locks. A third unexpected job became apparent for the base and this job was carried out to the base’s full capabilities. Just like the base’s roll with final training for pilots the base also served as a staging and modification site for P-47 thunderbolts[6,pg.48].

Never the less, the training, modification, and security that was provided at the base could not have been accomplished without the massive renovations done in 1942. Many people only see the military production power of the United States in the factory setting only, such as car companies making tanks and planes. The military industrial capabilities of the United States also included the ability to produce new training centers, and expand bases’ capacity to accommodate the rapid increase in military size. Phelps Collins Airport’s conversion to military training site masterfully demonstrates this often neglected side of the United States military production during World War II.

The Phelps Collins Airport in the 1930s looked nothing like the airports of today. It initial started out as an 80-acre grassy field. There was one hanger, one runway, and no housing for anyone on the airport grounds. Prior to renovations any pilots who trained at the site stayed in tents at the Alpena County fairgrounds [1]. The creation of this airport relied entirely on the government funding through Roosevelt’s New Deal for its conversion to what it is today. It was the Works Product Administration, WPA, that was in charge of putting in the single runway and the hanger as one of the many projects to help put people to work and combat the Great Depression [5]. From there it was the War Production Board that took over the property for government use and the major renovations began. These large renovations also helped stimulate the economy in Alpena like when the WPA came in [1]. This time it was on the tail end of the depression and helped put the remaining few people to work who didn’t get a job due to other war time industries.

The $5 million renovations set a spark in the community. However, the large amount of renovations meant there were serious requirements from the small northern community to produce a functional military base. Renovation from a more established airport would be one thing but turning basically a barn and a long drive way it into a fully operational military base would be quite a feat. Especially with Phelps Collins set to be one of the largest military bases in America at its time of creation. The building requirements created a plethora of jobs for the people in the town. The construction required 100s of men to complete the project. The need for equipment was just as great as the need for workers. All of the trucks from the town where used and a $1 million worth of machinery was brought in from around Michigan to complete the project [8]. All the stone and cement used in the project came from Alpena thus stimulating those industries as well [7]. The project while being large also was under a serious time constraint. Serious pressure was put on the workers and town, however they surpassed expectation. The project began August 7, 1942 and the largest part of the project, the 1.5 by 2.25 miles of runway, was completed by the end of October.  The paper described it as record time [8]. The addition of these jobs couldn’t have come at a better time as the area was still recovering from the depression[7]. The local newspaper described the projects impact on the town best  when it said, “The value of this construction cannot be estimated adequately financially [8].” There were other wartime industries active in the area like the concrete industry, but the updating of the base pumped money into the economy like nothing else while putting the rest of the people in town to work. After construction the base also employed civilians as officer workers, in the stock rooms, and even in a special fire department. The special fire department was trained to be used in case of a bombing at the base or at the Soo Locks [9, pg. 26].

Like many cities across the country, Alpena’s support for the war was immense. Alpena was one of the cities that showed unwavering support for the war. The influx in military personal for the base meant other accommodations needed to be made aside from the base.  A military club was formed by the city at a local hall in town. The club allowed for recreation and comforts not provided at the base [6, pg.51]. Another perfect example of this support was the town’s purchasing of not one but two B-24 liberators. By pure business donation and fundraising the town came together twice to buy the “Thunder Bay Babe” one and two [6, pg.63 and pg.79]. The war industries rejuvenated Alpena, and the town embraced them with open arms. The town then returned the favor, and supported the war to the extents its capability.

After the end of WWII the base also saw serious changes. Almost instantaneously as the war ended the base began its transition back to peace time operation. Most of the buildings and their fixtures where auctioned off or scrapped. Due to the serious housing shortages after the war, the barracks where not scrapped, but auctioned of as a whole to be used as civilian residence. Most of the barracks from Alpena where moved to the area around Mc Rae Park in Alpena. The only structures left from the renovation where the large hanger, the hospital, and the fire department. In under a year the base was only occupied by civilian pilots and their planes [6, pg. 48]. A few years after the airport was returned to the city of Alpena, the Air National Guard purchased part of the airport, made necessary updates, and it has been there ever since [1]. The fire department has been updated since, but it still offers training to this day.

The conversions that the Phelps Collins Airport went through during World War II clearly demonstrates the capabilities of the United States work force to support the military needs. However more importantly the transitions to military base and back again show how WWII truly engaged the entire country and everyone was involved in the war. A simple air field in northern Michigan called upon to become a multi-purpose military base. A clear comparison can easily be drawn to see how the base’s use is similar to that of the drafted soldier. The base was selected it was constructed and renovated to help fight the United States win the war. Just like a young man being drafted and trained to go fight the enemy overseas. Then once the war had ended the base was returned to the city of Alpena for civilian use, just like the soldiers coming home from the battlefield were returned to their families and the civilians lives then came from.