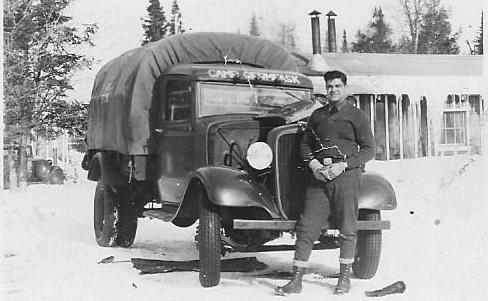 Camp Germfask is a forgotten Civilian Conservation Corps camp located in Germfask, Michigan. During World War II, the camp was used to house conscientious objectors. It was a small camp, with cabins situated along a stream. Today, the buildings are all removed from the area and are currently being used as buildings in Manistque, Michigan by the Veterans of Foreign Wars (VFW) [7]. The location is now known as the Big Cedar Campground.

Camp Germfask was originally built in 1935 by Civilian Conservation Corps laborers. The name “Germfask” is an acronym that contains the first initials of the last names of the founders of the camp; Grant, Edge, Robinson, Mead, French, Ackely, Shephard, and Knaggs [9]. The Civilian Conservation Corp (CCC), was a nation-wide public work-relief program that operated from 1933-1942 in the United States for unemployed, unmarried men from relief families as part of Franklin D. Roosevelt’s New Deal [13].

The CCC men stayed at Camp Germfask to contribute to the resource improvement project; most importantly to the Seney wildlife refuge located about five miles from the camp in Seney. According to Tracy Casselman, Seney refuge manager, this land was originally planned to be used primarily to preserve rain water from the marshes in the area [14]. There were 150 men that worked hard for ten years to contribute to the transformation of what the land is today. When the United States entered WWII in 1941, the CCC men left to serve their country. When the men left for the war, Camp Germfask was temporarily closed, but was soon going to be put to use by the United States Army.

In 1939, when Germany invaded Poland, the United States was not involved in WWII, however, Michigan took the appropriate precautions to protect themselves from a possible enemy attack. The border between Canada and Michigan, Sault Ste. Marie, and the Soo Locks were thought to be a potential target. The Soo Locks played an important role in the transportation of materials, especially iron ore (contributing to about 90% of the total iron ore in the US), and allowed large cargo ships to get to the Great Lakes and the Atlantic [14]. The iron ore was transported to factories to make tanks, planes, and munitions throughout the country. In 1942, the Army sent about 73,000 troops to Sault Ste Marie to protect the Locks [14].

Another potential target in the Upper Peninsula was the abundance of hardwood and the pulp/paper industry. According to Jackie Chandonnet, the Daily Mining Gazette published an article saying that “700,000 items used in war were made from pulp and paper materials.” Some of these items included blood plasma containers, plane tips, gun covers, gas masks, blue prints, and official documents, to name a few. Due to the war, there was a drastic population decrease in the Upper Peninsula and as a result, the pulpwood industry lost many of its workers. In 1942-1943, residents in the Upper Peninsula were doing whatever they could to contribute to the industry, but they soon began to realize that more laborers were needed. They turned to an outside source; German prisoners of war and conscientious objectors.

In late 1943, the Army sent some troops to the closed Civilian Conservation Corps camps to scout them out for the possibility of using them to house German prisoners of war (POWs). Two Army personnel were sent to the Upper Peninsula to inspect Camp Germfask, Camp Pepin, Camp AuTrain, Camp Raco, and Camp Sidnaw. (Visit this link for more information on Camp Sidnaw). The Army didn’t want the public to know what their plan was for the camps so they had to keep to themselves. One Army personnel said he was given these exact instructions, “DO NOT TALK TO ANYONE ABOUT THIS PROJECT. KEEP AWAY FROM STRANGERS. STAY BY YOURSELF.”[10].

The German POWs were captured and brought over to the United States on liberty ships. Liberty ships were originally used for the transportation of soldiers overseas to fight in the war. The German POWs were packed onto the ships and sent off to the United States. Kurt Peckmann and Ernest Floeter were among these captured Germans. Peckmann and Floeter were both captured by the British and turned over to the United States. Peckmann said “We were all just normal people captured and brought over. There were many lawyers, school teachers, and college professors in our group”[2]. Many German POWs thought that the Americans would treat them as badly as the Nazis had; and they were very worried about coming to the United States, however, that was not the case. Peckmann stated in his interview, “We thought most Americans were going to treat us poorly. We were surprised that we weren’t being kicked, beat, nothing like the Nazis had treated us”[2]. Floeter commented on the treatment as well by stating, “We didn’t know anything about the Americans, we thought they were honest people and wouldn’t treat us that way, but we were worried. When we arrived, they showed us just that. They were honest good people”[3].

Most German POWs arrived in Florida and were sent all over the United States. When the POWs arrived in Florida, Floeter said, “They took our clothes, soaked them to clean them, gave us some new clothes, some cigarettes, and a can of spam and sent us off to our next destination”[3]. Many German POWs were first sent to different camps across Illinois and later moved to camps around Minnesota, Michigan, and Wisconsin [10].

Camp Germfask as a CO Camp

On May 12, 1944, conscientious objectors began arriving at the old Civilian Conservation Corps Camp; Camp Germfask. Camp Germfask was the smallest camp that was in the Upper Peninsula only housing 80 conscientious objectors (COs). These COs included 60 college graduates, three lawyers, several school teachers, and college professors. There were also a few Jehovah’s Witness followers, who objected the war on religious grounds among the group. The COs earned the nickname “Conchies,” and they were housed at Camp Germfask to continue the work that was needed on the Seney wildlife refuge and to help out with the pulpwood industry.

A conscientious objector is an individual for reasons of conscience objects to serving in the armed forces. These men chose not to serve in the United States military. Most of the men were more educated than your average male at the time. Conscientious objectors were middle-class intellectuals, who were completely against the war and did not want to do anything even on the civilian side, to help out with the war (such as working in industries that manufactured supplies for the war). Most of the men entered from agricultural work, or farming and some came from professional roles of physician, teacher, lawyer, or social worker. There were also many religious individuals, musicians, journalists, writers, and artists [15].

Dan Dingman, a former CO assigned to Camp Germfask, said, “The conscientious objectors believed they were socialists at the time. The way I was brought up was to believe the nation should not lift up swords to another nation and there shouldn’t be war anymore.” [8] This idea seemed to be a pretty consistent belief across all of the COs, whether it was religious or for other reasons.

This camp was a little different from other CO camps at the time. The work at Camp Germfask was very demanding according to an excerpt from The Detroit Free Press article [7] that read, “Many found the labor so hard and monotonous that they asked to be reclassified as objectors willing to enlist in the armed services for combat duty.” This camp housed some of the most unruly and disruptive individuals. They would often try to escape and said the government was “infringing upon their freedoms as individuals” [10]. According to Tracy Casselman (Seney wildlife refuge manager), “The public respected the German POWs more than they respected the conscientious objectors” [4]. Most of the time, they refused to work and made it miserable for the Seney Wildlife Refuge staff. The staff was used to having German POWs work for them so they expected everything to run smooth and not have disruptive individuals. A former refuge staff member, Elizabeth Losey recalled, “It was like opening a rural wound every time you went to work. They were very smart and knew what they could get away with and they did everything they could do to do nothing” [5].

These conscientious objectors were housed here for a total of 388 days. From May 12, 1944 until May 31, 1945 these men created problems and made it hard to work for the entire Seney wildlife refuge Staff [4]. For example, the COs found a way to take six hours to clean a truck bed, when on average it would only take most people about five minutes to complete [10]. They also did whatever they could to cause problems such as threatening supervisors, destroying property, sabotaging sewage and water systems, and hurting those who were trying to work. It was almost unbearable for the staff to try to get them to work and when they finally did, it was a matter of trying to get them to complete it to standard.

Professor Russell Magnaghi stated that “The camp commander at the time took about two years to write a report on what happened at the camp. If the government would have used the German POWs here or people that actually wanted to work, they would have saved so much more money”[1]. Losey also commented on the report and said, “We were all so glad the episode was over”[5].

• a collection of photos from the Camp •

Current Use of the Buildings and Land

Today, if you visit the former CCC which housed conscientious objectors during WWII, you will find the Big Cedar Campground. There is also a sign right off of M77 that states the area was a former Civilian Conservation Corps, Camp Germfask #3626 1935 to 1945. It also says Camp #3626 helped build the Seney wildlife refuge. There are some cracked sidewalks and kitchen foundations still somewhat intact, but most of the buildings were completely removed [10]. The buildings were moved to Manistique, Michigan where they are currently being used by the VFW [7].