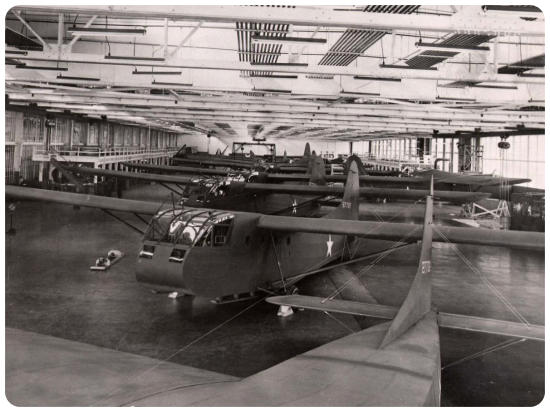 The Ford Motor Company plant that was located in the Upper Peninsula of Michigan was converted to build Gliders that were used in WWII. It was a much need change for the local economy and a great demonstration how industries both big and small played their part in the second world war.

Gliders were used in WWII to deploy Allied troops behind enemy lines. They had no engineers and were made with steel tubing, wood, and wrapped in canvas. They were towed behind planes until they were within distance of their landing zone. They were then cut loose and made an attempt to land behind enemy lines.

Initially the Air corps. saw gliders as an inexpensive way to provide training for rookie pilots. However the idea was rejected since piloting any of the Air Corps. aircraft required minimal training. It was a German attack on Poland using gliders that made the US see their potential.

Gliders were used because they were cheap, so they could be abandoned after landing. They were effective at placing troops behind enemy lines considering the danger. Gliders were also silent, which made them ideal for night missions over Germany.

The gliders would carry weapons and personnel behind enemy lines. Going on a glider mission was often deadly. The pilot had one opportunity to land the plane. The troops on board did not have parachutes. The Germans were also aware of their vulnerability to gliders and often gliders landed on an area laden with explosives. This was catastrophic as the gliders had no armor⁵.

Pilots also had to return to safety after they landed, often times walking tens of miles to the nearest allied troop location. It was basically a hope for the best mission. Pilots of gliders had to be extremely dedicated to the cause to agree to make such sacrifices. Normal pilots were often drafted into glider missions.

If a glider were to land and be discovered, they would be likely be pinned down and overrun by enemy forces due to their location behind enemy lines. Depending on how far behind enemy lines the glider landed, there would be no way  for allied troops to offer aide to anyone that had taken part in the glider mission.One such occasion happened in Remagen, Germany. The glider was wounded and unable to continue the mission. However, the pilots were able to place a tow rope out in a grassy field. A c-47 then flew over head and used a wooden hook from the fuselage of the C-47 to grab the glider and tow it to safely back to France [6].

In the early 1920s Henry Ford was looking for a place to produce his cars. Ford was very adamant about using the Upper Peninsula of Michigan to produce his cars. The Upper Peninsula was an ideal location for Ford, it has access to the Midwest railway system, a wealth of timber, and the capability of hydro-electric power. The town of Iron Mountain was in decline due to the mines in the area being shut down and most of the workforce was leaving the area.

Around 1923, Henry Ford purchases 400,000 acres in the U.P. of Michigan. The timber from these wooded areas he owned would be used to produce the wooden parts for the Model T. In 1925, the Ford plant employed 7,200 people and consisted of 3 body plants, a chemical plant, and several saw mills throughout the U.P. Ford also produced a hydroelectric dam on the Menominee River to supply to electric to run his plants. The Ford plant would produce the wooden parts for the Model T and ship them via railway to Detroit, MI.

During WWII, the United States government began converting all industrial factories to aide in the war effort. However, possibly due to the remoteness of the Upper Peninsula, the Ford plant in Iron Mountain was not included in this reorganization. This lead to a massive layoff of the workforce. The workforce located in Iron Mountain was there solely for the Ford plant. While employment for making of small items such as shipping crates of other items employed some workers, it was no where near enough to employee the plant workforce that had relocated there to work in the plant.

The reason the Ford plant was unable to continue operating was due to materials. Any material was to be used for the war effort. The Ford plant was perfectly capable of contributing. Desperate to find work for the employees located in Iron Mountain, Ford began searching for a way to contribute and put its employees back to work.

The government had been pursuing the idea of creating Gliders for the war effort. The first was designed in Detroit. Gliders, which are made primarily of wood, were approved for use in the war effort and production was ready to begin. The Upper Peninsula offered the perfect location for production of the Glider. There was an adequate workforce, excellent supply of timber, a big enough power supply, and the Ford plant was sitting idle.

The Ford plant was tasked to produce WWII gliders for the Army. The plant was converted, and employees brought back to work and trained to build gliders instead of the Ford “Woody”, which was what the plant was producing before the war.

During World War II, the Ford Plant build more gliders for the United States Army than any other company in the United States [4]. The Ford plant had the ability to build gliders so efficiently because of the existing infrastructure that Henry Ford had built. The Ford Plant produced 8 gliders a day. It employed 4500 people and operated 24 hours a day, running three 8 hour shifts of 1500 workers per shift [1].

The museum located in Kingsford, MI has 1 of 7 restored gliders in the world. In total, the Ford Motor Company constructed 4,190 gliders. The museum also has a 3/4 replica of the CG-4A glider [4].

The Ford Motor Company no longer has a plant in the Kingsford Area. There are a lot of structures and remnants of the work Ford as well as the Ford Plant in the area that can be visited but are not official museums.

Special Thanks to Bill Cummings for his knowledge of the unrecorded history of Iron Mountain, MI.

Note-The reference to the  location of the Ford Plant changes throughout this time period. Iron Mountain originally referred to the area that included the Ford plant. However, the area was renamed Kingsford after Edward G. Kingsford who was cousin-in-law to Henry Ford. Edward G. Kingsford played an important role in the development of Ford’s presence in the Upper Peninsula