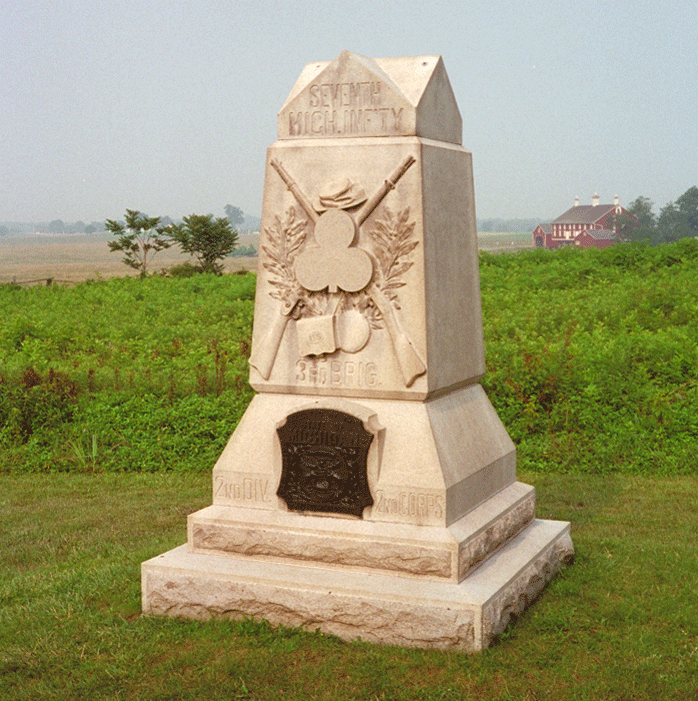 7th Michigan at the Battle of Gettysburg

A few months after the Civil War broke out, the 7th Michigan Volunteer Infantry Regiment was formed and mustered into service in Monroe, MI on August 22, 1861. At the Battle of Gettysburg, they held a position on Cemetery Hill until the battle ended, helping repel Confederate attacks on the second and third days of the battle.

After the regiment was mustered into service in 1861, they took part in dozens of battles throughout the civil war [6]. The first big battle the regiment takes part in is the battle of Antietam. They experienced a 55% casualty rate in the regiment and soon found themselves involved in the Battle of Fredericksburg [6]. The regiment earned a reputation in that battle for crossing the Rappahannock River under heavy fire to take out Confederate sharpshooters on the other side [5].

As the war dragged on, the Union was under pressure to drive the Confederate Army out of the North, as failure to do so could result in the war being lost. The Battle of Gettysburg became very important to the Union because if they didn’t win this battle, it was likely that they were going to lose the war. When Union and Confederate first met on the morning of July 1, 1863, the 7th Michigan Regiment wasn’t on the battlefield at this time. The regiment didn’t get on the battlefield until the second day of fighting.

On the second day of the Battle of Gettysburg, the 7th Michigan Volunteer Infantry Regiment joined the fight under the leadership of Lieutenant Colonel Amos Steele [7]. They were assigned to hold a position on Cemetery Hill towards the center of the formation. The regiment aided in repelling charges to the South from Confederate forces trying to break through Union lines [7]. The Confederacy tried to gain positions on Little Round Top, Devil’s Den, and the Wheat Field, but they were unsuccessful [3]. The Union line on Cemetery Hill held steady going into the third day of battle.

Early in the afternoon on day three of the battle, the 7th Michigan was bombarded with artillery fire from the Confederate forces [3]. The map below shows where Confederate artillery guns were placed in preparation for Pickett’s Charge with the goal of softening the center of the Union lines allowing for an attack.  According to Samuel Hodgman of the 7th Michigan Regiment, there were 120 artillery guns firing on the regiment’s position in the Union lines [2]. Hodgman wrote in a letter home after the battle about the onslaught of the artillery, saying

“All the protection we had was a slight barricade of rails. There is no use trying to say anything about the cannonade words wont express it. Some how we seemed to be out of the range. There seemed to be two strata of the storm one would burst over our heads or after it had passed over us the other would strike in front & ricochet over us [2].”

In the letter, he drew images of where the regiment was being barraged from and what they had for cover against the artillery. If the artillery barrages were more accurate and effective against the Union troops, the charge would have been much harder to repel and the Union could have succumb to Pickett’s Charge.

Despite being pinned down by the Confederate artillery barrages, the regiment was still intact after the barrages stopped. At around 2:30pm, Union troops stopped firing their cannons in order to fool the Confederates and conserve their ammo [3]. This tactic fooled General George Pickett into thinking that the Union forces were out of ammo, making him think that it would be the perfect time to launch an attack in middle of the Union lines where they would least expect it [3]. On the Union side, the 7th Michigan Regiment were in the middle of the line where Pickett wanted to attack.

At around 3pm that day, the regiment took part in repelling Pickett’s Charge. This is the most notable and crucial thing the regiment did in the Battle of Gettysburg. When Confederate soldiers got close enough to the Union line, the 7th Michigan soldiers were able to flank Confederate troops, causing even more casualties for the Confederacy [7]. In a separate letter from Samuel Hodgman, he wrote about how the 7th Michigan and the 59th N.Y. Regiments saved the day during Pickett’s Charge, saying

“Both our flanks were turned and two batteries one each side of us taken by the rebs, yet we stuck to our barricade and fought till they- what were left of them. were glad to come into our lines or skedaddle doublequick Our boys expressed a determination never to retreat one inch from the line as long as they could use bullets or bayonets. We were fully prepared to meet them with either and the only reason that we did not use the bayonet was that we shot them down before they could get to us [1].”

If regiment failed to repel the charge, the Confederates would have been able to break through the Union lines and possibly change the outcome of the battle. Once the battle had ended, the 7th Michigan Regiment participated in the pursuit of General Lee’s army on his retreat back to Virginia. After the pursuit of Lee’s army, the 7th Michigan Regiment was sent to New York City in order to deal with the draft riots that were happening in the city [5]. The regiment joined back up with the army a couple month later and they participated in numerous battles and campaigns for the rest of the war. These battles and campaigns include but are not limited to the Battle of the Wilderness, the Battle of Spotsylvania Courthouse, the Battle of Cold Harbor, and the Siege of Petersburg [6]. After Lee surrendered at the Appomattox Courthouse, the regiment was moved to various cities until they were mustered out of service on July 7, 1865 [5]. Throughout the Civil War, the regiment suffered a total of 338 deaths.

In 1888, a statue was built to commemorate the actions of the 7th Michigan Regiment, it was built near where the regiment was positioned on Cemetery Hill [4]. The statue was dedicated by the State of Michigan on June 12, 1889 [4]. On the statue is a brief summary of what the regiment did in the days of the battle. This monument and others built to commemorate the regiment serve as reminders to all that visit them of the actions of the 7th Michigan Volunteer Regiment.