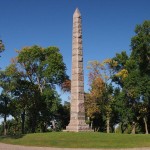 (photo by McGhiever, used with permission)

The Dakota War of 1862 is a defining point in Minnesota history, due to the expansion achieved and the clear message that was sent as a result of the war. Not only did it allow for the expansion of Western settlers into the Minnesota River Valley, but the execution with which it ended set a precedent for the mindset of Western Civilization towards Native American tribes.

In the early 1860’s, the United States was in a civil war with itself. Resources, troops, and labor were being poured into the war. However, this did not stop the expansion of settlers into Native American Lands, despite treaties signed by the Minnesota Government and the Dakota Tribe.

In addition to trying to take more of the Dakota land, the governing officials of Minnesota were also not adhering to deals made with the Dakota people. When American people first started settling Dakota lands, they reached an agreement in which, in exchange for land, the Dakota tribe would receive food and compensation. A building was erected, called the Lower Sioux Agency, through which Dakota representatives could receive their welfare. However, due to demands of the Civil War and a disregard for the Dakota people, the settlers failed to give the Dakota what was duly theirs. The Dakota people, as a result, were impoverished, barely surviving on their reduced hunting grounds. In one final attempt at peaceful discourse, tribe leader Little Crow wrote to agent Thomas Galbraith,

“We have waited a long time… We have no food but here these stores are filled with food. We ask that you, the agent, make some arrangement so we can get food from the stores, or else we may take our own way to keep ourselves from starving.”

He ended the letter with the clear threat, “When men are hungry, they help themselves.” Weeks later, they received a response from Andrew Jackson Myrick, another representative from the government who worked for the Lower Sioux Agency. His response to their pleas was, “So far as I am concerned, if they are hungry, let them eat grass.” (Dillon). Little Crow realized he would have no other choice than to take what was his by force.

The first fighting broke out in Acton Township, MN on August 17, 1862, when a Dakota hunter stole eggs from a nearby farmer and killed five white settlers. Right after this, the Dakota tribe held a war council, in which Little Crow begrudgingly agreed to continue small sieges on white settlements to drive them out and defend their land.

On August 18, 1862, war was declared by the Dakota tribe when Little Crow led an army of warriors to Redwood, MN to begin driving settlers out. They primarily focused on the destruction of the Lower Sioux Agency. After burning this down, they continued to attack and destroy farms and other settlements in the counties of Renville and Brown. Of the 1200 settlers that lived there, more than 160 were killed and over 100 taken captive. The Dakota warriors also attacked the nearby township of Milford, killing more than 50 German immigrants that lived there. In total, between August 18-19, more than 200 settlers were killed, with almost the same amount, mostly women and children, taken hostage (Carley).

The Dakota continued their march towards Redwood Ferry on August 19, where they met with a hastily organized militia and the 5th Minnesota Volunteer Infantry Regiment. The Dakota claimed their first victory here, in what became known as the Battle of Redwood Ferry. Encouraged by this victory, war parties continued through the Minnesota River Valley, setting fire to settlements and killing many settlers.

Urged on by his tribe and their victories, Little Crow led his men into the nearby city of New Ulm, where they attacked Fort Ridgely on August 20-22, 1862. Though the Battle of Fort Ridgely ultimately ended in a standstill, with the militia able to hold the fort, this concentration on the defense of the fort left little help for other settlements, which was a huge factor in the Dakota victory at the Battle of Birch Coulee less than two weeks later.

Media coverage on the war skyrocketed after these battles. Violence from Native American tribes during this time were not unheard of, but the thought of a full-scale war against the Dakota tribe, especially during a time of civil war, was something that nobody expected.

Most articles that were written about the Dakota War served a purpose of gathering support for the war and seeding animosity toward Native American people. On Friday, August 29, just one week after the successful defense at Fort Ridgely, the Pioneer and Democrat, a local newspaper press located in St. Paul, Minnesota, described the early events of the Dakota war as a “Terrible Indian Raid.” In their article, they use terms such as “shocking barbarities” and “massacre” to paint the Dakota tribe in a bad light. An excerpt from this article reads:

“We can no longer shut our eyes to the fact that the Sioux Indians have commenced a war upon the settlements on our own frontier, and have massacred hundreds of men, women and children.”

Not all Dakota people supported the war, however. Almost as soon as it started, a large group of Dakota tribesmen who were opposed to the war formed a separate camp on the Upper Sioux Reservation. They called themselves the “Peace Party,” and their main goal was to stop the Dakota from fighting further and convince their other tribesmen to release the settlers that they had taken prisoner.

On September 2, 1862, a Dakota war party attacked a scouting party of 150 American soldiers at Birch Coulee, a mere 16 miles from Fort Ridgely. The skirmish lasted for three hours, killing 13 soldiers and wounding 47. The Dakota, however, only suffered two casualties (.

The Lower Sioux tribe were not the only Dakota people who were fighting. In the northern parts of Minnesota, near present-day Fargo, small bands of Dakota warriors were attacking stagecoaches and sieging steamboats in and near the Red River Valley. This put a halt to most commercial trades, as the Red River was commonly used for these purposes. Civilian refugees took shelter in nearby Fort Abercrombie, where they were safely relocated to St. Cloud by a US Army regiment from Fort Snelling. Regardless, the lack of goods being shipped south was detrimental to the American forces fighting the Dakota tribes, and it allowed for Little Crow to continue his siege with ease.

During all of this, the regional representative for Minnesota was requesting aid from the federal government. However, due to the high demands of the Civil War, President Abraham Lincoln wasn’t able to respond until September 6, 1862, when he formed the Department of the Northwest, with General John Pope in command. Pope organized the Third Minnesota Volunteer Infantry Regiment and, along with Henry Hastings Sibley, led his troops to Wood Lake, MN, with the goal of freeing captive settlers and forcing one final decisive battle. They reached Wood Lake on September 21, where the Sixth and Seventh Minnesota were already ready to strike.

The next morning, on September 22, 1862, a scouting party from the Third Minnesota Regiment was in search of food, when they were ambushed by a Dakota war party. The US responded in force, with the Third Regiment quickly coming to aid and artillery pushing on the right flank of the Dakota tribe. Meanwhile, on the left flank, Major Robert N. McLaren led a group of soldiers to attack the back line of the Dakota men. What followed was a two hour battle that led to a decisive victory for the US, with many Dakota casualties.

Realizing that they had lost, leaders of the Peace Party urged their people to surrender. On September 26, 1862, the Dakota tribe officially surrendered to Colonel Sibley at Camp Release in Montevideo, Minnesota. Sibley arrested over 300 Dakota warriors, and ordered the rest of the Dakota people to be relocated to Fort Snelling, where they were forced to spend a winter in a civilian internment camp. Of the 1600 Dakota people who were sent there, of which a majority were women, children, and elderly people, more than 200 people died of illness.

In the following November, the surrendered Dakota warriors were put on trial. A total of 498 prisoners were put on trial, and of that, 300 were sentenced to death. Before the sentence was taken out, however, President Abraham Lincoln commuted 262 men, so the sentence only stuck for 38 men. On December 26, 1882, all 38 war criminals were hung in Mankato, MN. This is reported to be the largest mass execution that took place in a single day in US history (Minnesota History Center).

Little Crow, however, managed to escape in September of 1862, seeking refuge in Canada. However, after less than a year, he had to return to Minnesota, where he was killed by a local farmer on July 3, 1863 near Hutchinson. He was scalped, and both his skull and scalp were preserved in a museum in St. Paul. They were kept there until 1971, when the local government decided to remove them and return both skull and scalp to the grandson of Little Crow (Carley).

This execution of the Dakota men was met with some controversy. Some critiqued it for being an unfair trial. One such man was Thomas Williamson. Williamson was a missionary and medical doctor who came to Minnesota in 1835. Not only did he care for the needs of white settlers and Dakota people alike, but he also helped to create the first recorded written alphabet for the Dakota language. During the war, he helped care for wounded American soldiers, as well as ministered to Dakota prisoners in Mankato. During the trials, he advocated for the release of the Dakota prisoners. After the sentence, he wrote to his friend and acquaintance Stephen Riggs,

“From our Governor down to the lowest rabble, there is a general belief that all the prisoners are guilty, and demand that, whether guilty or not, they be put to death as a sacrifice to the souls of our murdered fellow citizens.”

After the war, all of the Dakota people, including those who helped the US in the war, were exiled from Minnesota and forced to leave Fort Snelling and move to the Crow Creek reservation, located in present-day South Dakota. Farmers and settlers began to inhabit the Minnesota River Valley and other reservations that had belonged to the Dakota.

Some Dakota families, who had remained loyal to the United States during the war returned to Minnesota in 1853. Recognizing the aid they provided, Congress authorized to allocate no more than 80 acres of the original Dakota reservations to each loyal Dakota tribe member that returned. The 1883 census recorded six families living on a reservation in Redwood, Minnesota. Today, the Dakota tribe flourishes, owning 4 separate reservations across Minnesota (Dillon).

Almost 12 years after the end of the war, on July 4, 1894, the Camp Release State Monument was dedicated to serve as a reminder of Minnesota’s early history. It stands to commemorate the release of the 269 captive American prisoners and the surrender of the Dakota tribe (Battle History).

The dedication of this monument makes a clear statement of the attitudes of white settlers towards Native American tribes. Rather than reflect upon the tragedies of the war, of the bitter execution in the end, this monument is specifically dedicated toward the hundreds of American prisoners that were released and the surrender of the Dakota tribe. As evidenced by the newspaper articles and the treatment of the Dakota people, settlers viewed Native Americans as savages that were of little to no importance. This image of them is reinforced by the sole focus on American victory and their “compassion” when releasing all the other prisoners.

The Camp Release State Monument still stands today as a reminder of Minnesota’s early history and a representation of America as an ever-expanding and changing nation.