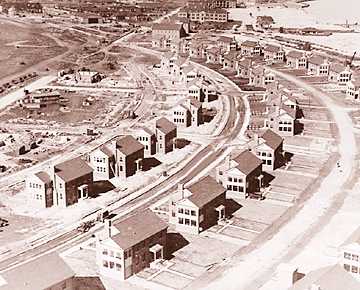 Selfridge Air National Guard Base in the Interwar Period

Following the conclusion of World War I, Selfridge Air Field had a very uncertain future.  Originally, Selfridge Air Field was purchased by the Packard Motor Company in 1916 to begin developing aircraft engines for the fighter planes being used to fight in World War I. After World War I ended, a lot of the men that were enlisted previously were being discharged and no new personnel were being trained since the United States was now at peace. This decline in numbers of military men and arms meant that Selfridge Air Field was not guaranteed a future in air power, being airborne military force. Despite these setbacks, Selfridge Air Field experienced expansion and even prosperity during peacetime. Not only did it overcome the obstacles posed by peacetime, the base proceeded to be a very important fixture in air power and the community in the interwar period, a fame that extends until the present day.

Selfridge Air National Guard base began as a location that the Packard Automobile Car Company had invested in to begin building aircraft engines for the fighter planes that would be utilized by the United States to fight World War I. In the year leading up to its acquisition the community surrounding what was then called Joy Aviation Field, and later renamed Selfridge Air Field, was stirring with rumors of the potential for an airfield in the area. These rumors and ideas stirred up so much discussion that the Mount Clemens Business Men’s Association, as well as other industry magnates in the greater Detroit area began lobbying for a government owned, military run air field to be opened in the area that the Packard Company had acquired previously. Since the United States had just entered World War I, and there was support for an airfield in the area, Joy Aviation Field became one of 9 military airfields operated in the United States (6, pg. 2).

After the post war low period in military expansion, the value of Joy Air Field was evaluated by the National Aeronautics Advisory Committee (NAAC), as there was potential to purchase the land as opposed to leasing it which is what was done until this point in history. Henry Joy, the president of the Packard Company, offered to sell the land to the government for $190,000 which the government appraisers thought was too high a price to pay. However, the NAAC also noticed a few qualities that could lead to it being a valuable piece of property. The first factor that made it an appealing deal was its proximity to the booming automotive capital of Detroit. Detroit had very recently been heavily industrialized to produce automobiles and this industrial buildup could also be harnessed for aircraft production. The second important detail was that Joy Aviation Field was located very close to Lake Saint Clair. Lake Saint Clair provided a good space for practice bombing runs as it was a large body of water located less than a mile from where the air field would be located. It could, and would also be used as an emergency runway in the winter time when harsh weathers made landing on the airfield difficult (7, pg. 1). Those factors, as well as support from the local community lead to the government purchasing the 640 acres of land at the price that Mr. Joy had originally demanded. This recent government procurement was renamed “Selfridge Air Field”, in honor of Lt. Thomas Selfridge who died while doing research with the Wright Brothers, was the first military aviator to lose his life due to a powered aircraft (8, pg. 1).

This purchase lead to a large revitalization for the previously almost defunct air base. Selfridge Air Field served as a hub for many different activities in the postwar and interwar periods, not the least of which was actual military air training. This rejuvenation allowed squadrons to be based out of Selfridge, and for people to come to Selfridge for specialized training in gunnery maneuvers, radio communications, and other operational techniques such as Mechanic School. It was also a center of air racing in the area, a spectacle that would enrapture the local community, and test Selfridge’s best pilot’s abilities in times of peace.

Not long after the base was purchased from the Packard Company in 1924, Selfridge was made a permanent structure, and was put under the command of Major Carl Spaatz, who would later become the first chief of staff of the United States Air Force. In 1929, Curtis LeMay who would become famous for being the driving force behind the United States’ nuclear bomber force, served his first duty at Selfridge and reminisced nostalgically about, “excitement when, as a young lieutenant with newly minted wings, he received orders for Selfridge Field and an opportunity to rub elbows with the ‘First Team’”(9, pg. 7). Selfridge Air Field would go on to be a fixture in Air Power, serving as the jumping off point for careers for over 100 servicemen and officers that would later go on to be very influential in the world of United States air power.

As noted in the Air Service Newsletter issued on the 10th of May 1920 in regards to the state of the base, there was no shortage of people volunteering. This newsletter even says that, “The number of men applying for enlistment in the Air Service is increasing daily and the majority of the applicants are well above the average intelligence and trade qualification.” (2, pg. 8)

The military also responded to other calls to action, even when the country at large wasn’t a part of any conflicts. In an interesting application of aviation technology for the day, a pilot from Selfridge Field was requested to help locate a group of men who had robbed a bank. While the weather conditions did not allow for this pursuit to be made, it is still very interesting to observe that even as early as the 1920’s, the police thought to ask an air field that isn’t affiliated officially for assistance in police matters during a time when airplanes and aviation were still a new technology that had not been largely explored for domestic police action (3, pg. 6).

William “Billy” Mitchell, who is known in the air power world for pushing for a stronger air arsenal, established the Mitchell Trophy Air Races with the hopes of promoting air power. This race took place at various air fields throughout the years it was held, and was designed to help hone the skills of military pilots in peacetime. The competitors for this race were pulled exclusively from the First Pursuit Group out of Selfridge Air Field. The races became large spectator events, and while pilots were supposed to follow the pylons around the course, it is said in the MCPL Local History Sketch on this race that pilots could also have followed the lines of cars that went around the perimeter of the course (10, pg. 2-3). Near the end of the times of these races in the mid 1930’s, there was extra emphasis on the military side of things, as it seemed like war was brewing in Europe as well as in the Pacific with the Japanese. Many of the winners of this illustrious trophy went on to win laurels overseas throughout World War II in both theaters of the conflict.

Not only did the base function as a hotbed for military pilots, it also provided great joy and economic prosperity for the local citizens. Immediately after the deal was struck with the government in May 1917, the local newspaper “The Mount Clemens Monitor” reported that “Mount Clemens is suffering severely from stiffitis neckitis” (5, pg. 1) . While this isn’t a real trauma that people suffered, it is very much indicative of the kind of attitude that the people of the surrounding community would hold throughout the interwar period and even until the current day about the fact that such marvels of engineering were located and frequently shown off so close to home. This phenomenon wasn’t exclusive to the Mount Clemens area either, my grandmother who spent her early life in Detroit recalled seeing the aircraft overhead on nice summer days and traveling to Belle Isle on foot to watch them do maneuvers during the summer.

On top of the display of air power that captured the hearts and minds of the local population, the base also provided a lot of jobs to the citizens nearby. Starting as soon as the government bought the land, construction had to be done to allow access to the base from larger roads. Construction began almost immediately on a road to give access to the base from Gratiot Road, a major thoroughfare in the area. This road was called Henry B. Joy Road, and gave many local laborers jobs constructing it (6, pg. 1). On top of building infrastructure through the marshy flats that most of the area of the base consisted of, it was reported in the Mount Clemens Monitor that, “Over a thousand men were seen working on the site.” This was reported very soon after the deal had been made with the government. At the time, the population of Mount Clemens and the surrounding area wasn’t nearly as booming as it is in the present day, and having over a thousand jobs in the local community, as well as the jobs constructing a road to access the site, was no small contribution to the welfare of the area.

Despite these successes, not everyone was as happy for the air base as the Mount Clemens area was. There was a coup, detailed in the Detroit Free Press, where a Senator Vandenberg (R-MI) had possession of a letter between the then current Chairman of the NAAC, and a few other complicit individuals who wiped out all the appropriations in the budget for Selfridge Air Field, hoping to eliminate it. Later, in the article, the assistant secretary of war is quoted saying that he, “Has no intention of abandoning Selfridge Field, and that it looked upon the Michigan post as one of its most important training facilities” (4, pg 1.). This statement is easily corroborated with the other accomplishments and achievements heaped onto the field in this era, and going beyond those details, it can also be seen that it was an important fixture in the community throughout the interwar period both as an economic influx of jobs and as a source of entertainment, as well as a strong point in public relations for United States air power in the area.