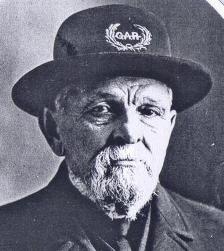 In 1928, veterans of the Spanish-American War, members of the American Legion, and more gathered at St. Paul’s catholic church in Negaunee, Michigan to honor a fellow soldier and loved family and community member. The service was for Peter Trudell, the last Negaunee civil war veteran.

Peter Trudell Sr. (Trudelle) was born on St. Peter’s Day, June 20th, 1840, giving him his name. During the civil war, the Union Army experienced shortages of men which led many French Canadians to cross the border and join the fight. Trudell was among these men. After leaving his home of Quebec, Canada, he travelled first to Akron, Ohio and then to Cleveland soon after. He took up work at shipyards where he cut timber for the building of ships, work he very much enjoyed. Following his shipyard work, he went to Chicago and formally enlisted on September 20th, 1862 [2]. In the month prior to his enlistment, the war had seen mostly Confederate victories. The tide of the war was against the Union; the South had reinvigorated cause to fight as President Lincoln had been strengthening his support of the Emancipation Proclamation and Union forces had seen more losses than victories. Trudell would be joining the war in a time of low morale and on the less favorable side, but he volunteered nonetheless.

Trudell joined the 132nd Illinois Infantry (19th Illinois Infantry during the Civil War), a regiment mustered into the service in 1861 for three years. Trudell became a member of Company A but was quickly transferred to Company F and became a bugler1 [3]. His job would be to sound the bugle as a signal to the regiment to get into formation. His duties would have also included playing taps to honor fallen soldiers (which is a notably hard task, much harder than on the modern trumpet). However, the garrison duty they were assigned never yielded the need to do this; Company F performed garrison duty in Paducah, Kentucky and never saw action. He was still in garrison duty during the battle of Paducah, a Confederate victory in which Major General Forrest successfully raided Union supplies from the town and the nearby Fort Anderson [4]. Trudell’s regiment however was on garrison duty out of range of the conflict and was not directly involved in any battles of the civil war. His time here however gave him the start to a military career that would lead him to fight, live, and finally die in the Upper Great Lakes Region. His regiment was mustered out of service in 1864 and he was officially discharged on June 10th, 1865 and his service in the Civil War was concluded.

1 – There are conflicting reports of his service in the Civil War. His name was not found in the official roster of the entire 19th Illinois Infantry but his obituary in the Iron Herald confirms that he was in Company A, transferred to Company F, and then escaped the war without injuries. However, his obituary also states that he was involved in numerous engagements whereas other accounts of Company F  state that Company F never saw action during its garrison duty during the time Trudell was in the service.

Trudell returned to Canada and very quickly joined the fight against the Fenian Brotherhood (The American belligerents fighting under the beliefs of the Irish Republican Brotherhood to help emancipate Ireland from Britain’s control). Trudell enlisted with the American forces fighting the Fenian Brotherhood as he was offered a $100 bonus and a small parcel of farmland as payment. He was stationed near Niagara Falls in Niagara, Ontario. Here he participated in the Battle of Fort Erie where Colonel John O’Neill crossed the Niagara River, leading a large force of American Fenian soldiers, to the capture of Fort Erie [5]. Trudell fought in this battle against O’Neill and supposedly again landed no injuries but this short period of service led him to receive his Canadian medal2. The volunteers Trudelle fought with were, in his words, “scarcely clad and more scarcely fed.” These volunteers would not be recognized for years after the war as this battle was seen as such a point of shame for the Canadian government but that fact was luckily rectified nearly 25 years after the battle [6]. Trudell fought for seven or eight months (the most notable conflict being the Battle of Fort Erie) before an honorable discharge in 1867.

2 – There are no records found of what the medal was earned for but he wears it in the photo of him in his G.A.R. uniform. Records also are not found of his service in this Fenian Raid other than his obituary, which comes from familial accounts at the time of his death.

After his discharge, he received the $100 and sold his earned land for $110. With this bonus, he then returned to the U.S. to return to work with ships. He sailed on the Great Lakes for an unknown period of time and fell in love with the area. Impressed with the lakes, he finally settled in Negaunee. There, he worked for the Northwestern Railroad and the Negaunee Roadhouse as a pump man for the water tanks. On November 16th, 1869, he married Lucie Guimond and they had 5 children. Sometime later, he opened a confectionary and newsstand in the post office and ran this business for 20 years. His son, Peter Trudell Jr., shared many of his father’s passions and would eventually become the postmaster at the same post office as well as an active member in creating the Northern Michigan Sportsman association and the Negaunee Rod and Gun Club. None of his direct relatives’ descendants live in Negaunee anymore but distant relatives’ descendants (related by marriage) still live in town; they could not, unfortunately, offer more knowledge or history regarding Trudell) [2].

In the years after his discharge, Trudell would be active in memorial activities. He participated in Memorial Day observances for many years and began to compile a list of deceased Negaunee veterans from the Civil War, the Spanish-American War, and World War, and marked graves of veterans for Memorial Day. 42 years after his service ended, he received the medal for his service to Canada. On Memorial Day in 1927, he was honored as being the last surviving Civil War veteran in Negaunee after Edward C. Anthony passed away. He was also honored in an article about Anthony that states it is “such an honorable, yet pathetic, distinction” to be named the last veteran. On October 4th, 1928, Peter Trudell passed away [3].

He was a veteran who fought for a country that was not even his own. His service and character was honored by many people and groups throughout and after his life, including the Chevaliers’ de LaFayette (a group in which he was a charter member). On the day of his funeral, flags flew at half-mast as the community remembered a veteran, a hard worker, a dedicated community member, and devoted father and husband.

I personally was connected to this story because St. Paul’s church was my church for many years and I consider Negaunee my home. I attended funerals of loved ones at that very church and grew up in the town he helped to develop. I was also able to see his gravesite in the cemetery I have visited many times before for others buried there.