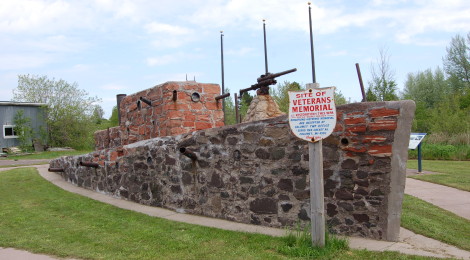 The Civil War ship, the USS Kearsarge plays a key role in the rich history of the Copper Country.  Kearsarge, Michigan located in the northernmost part of Michigan is home to a giant brick replica of a Civil War ship, the USS Kearsarge.  In a place with a vibrant history like the Copper Country, it is very interesting and crucial to know the full background story about what kind of people were working in the copper mines and how they got here.

Early Years of the Kearsarge

The USS Kearsarge was built in Portsmouth Navy Yard in Maine.  The shipyard lies on the border of Maine and New Hampshire.  The name “Kearsarge” stemmed from nearby Mount Kearsarge in New Hampshire. The ship was built during 1861 as part of an emergency shipbuilding program.  The need for Confederate hunters was a growing need for the Union army as the South had been terrorizing merchant ships globally.  With the growing terror of the Confederate ships rampage, the need for Union fighters and naval firepower was becoming well known.  The 1550-ton steamship was commissioned in early 1862 and was immediately sent overseas to blockade the confederate raider CSS Sumter. The Sumter crew abandoned ship in December of 1862 and their captain, Raphael Semmes would go on to command one of the most successful confederate raiders, CSS Alabama.

The Kearsarge was equipped with the most technologically advanced weapons for their time.  The pride of the ship was two Dahlgren guns.  These were 11-inch smooth barreled cannons capable of delivering a devastating 166-pound solid shot, which would demolish any ship at that time.  They were also equipped with 5 smaller shot weapons capable of faster reloads and therefore more projectiles launched.  The ship was later modified to add reinforcements to the hull protecting its vital insides.  The reinforcement was made from chains lining the vital areas, designed to stop any smaller projectiles from ravaging the boilers and engine.

The steamship’s next task was to hunt down the famous Confederate raider, Alabama.  The Alabama was built in 1862 after the Kearsarge first mission resulted in the decommissioning of CSS Sumter.  The Alabama had been wreaking havoc for nearly 2 years on Union Naval ships as well as merchant ships.  After searching for the Alabama for nearly two years, the Kearsarge finally found them in Cherbourg, France where a battle would soon ensue.

The Alabama was in port resupplying and getting repairs done when they were discovered by their enemy.  The Kearsarge waited for the Alabama outside the break wall, careful not to start a battle in neutral France.  Alabama had no plans backing down, they came out of port and immediately engaged with the Kearsarge.  The two ships chased each other around in circles, each trying to get the upper hand.  Alabama commenced the fighting with a broadside shot at 1000 years.  The Kearsarge soon returned fire and about thirty minutes later, they noticed the Alabama was in distress.  The ship went down shortly after twelve, after only one hour of fighting.

The Alabama didn’t go down without causing any damages to the Union fighter ship.  The Kearsarge crew suffered three deaths as well as some physical damages to the ship.  The CSS Alabama, on the other hand, lost over thirty of their one-hundred fifty-plus crew size.  The Kearsarge rescued many of the crew, but the officers and captain were taken onto a French yacht, where they sailed off.  There are varying reports of what caused the Alabama to go down.  The first report is that 1 fatal shot to a critical part of the ship caused them to go down. The other report states that many shells in the hull of the ship allowed water to rapidly enter the vessel.  It was believed the Alabama crew was preparing to board the Kearsarge which could’ve turned their luck around.

The makeshift armor aboard the Kearsarge proved to be effective at protecting the engine compartment.  Two shots from the smaller guns aboard the Alabama struck their armor.  One shot broke through the armor and dented the hull, while the other bounced off the armor.  Either of these shots could have ended the battle quickly with a victory for the south but thanks to the ingenuity of the Kearsarge crew, that was not the case (The New York Herald, July 09 1864).

After their biggest naval battle, the USS Kearsarge headed back towards North America and settled in at a port in Boston to receive some necessary work on the vessel.  After a short wait in Boston, the crew was sent back out to patrol in Europe early in 1865 where they hunted the CSS Stonewall.  The Civil War would soon end, and the ship would be decommissioned. The Kearsarge spent the next 30 years in and out of active duty.  Departing on tours from South America to Australia, the boat put on a lot of miles venturing around the world on various expeditions.

The ship was sent out to Panama in 1890 to assist with ongoing railroad strikes.  Americans had a great interest in this area, so they sent out a strong naval force to ensure nothing got out of hand.  Thankfully their presence was enough, and the naval force did not have to engage.  The ship continued to patrol near Central America where they eventually struck a shallow reef on February 2 of 1894 where the damage was beyond repair. No losses were reported from the accident but, the Kearsarge was laid to rest for good later that year (Evening Star, September 16 1890).

Working Aboard the Kearsarge

Life aboard the winning steamship was anything but easy.  Captain John Winslow would oversee his near 150-man crew with his officers staying very busy writing daily reports and the rest keeping things clean and ready for battle.  The Kearsarge’s two massive guns were their most important weapon and keeping them ready for use at a moment noticed was crucial to their success.

Working aboard the Kearsarge taught the crew what hard work is. Surrounded by constant danger and fear of death or injury prepared the crew for life after war. The crew went their separate ways to find work after the war was over. Many stayed in patrol of the south where the reconstruction process had now started. Raw ores and materials were needed faster than they can be produced for the reconstruction period, and explorers knew the place to search.

Way up north in the Upper Peninsula of Michigan, a rich band of copper was known. What explorers didn’t know was the extreme quantity. Searching for potential mining spots explores hiked almost to the tip of the Keweenaw Peninsula to a place now known as the town of Kearsarge. The discovery of the actual mine location is quite a strange story. Explores brought many supplies with them to keep them fed and healthy. One evening, the pigs escaped their temporary pen and when they discovered their lost animals, they were in a large pit where they had overturned many rocks. Shown under these overturned rocks was the highly sought-after copper.  They concluded they were in the correct area for copper mining and the Calumet and Hecla Mine was born (Chicago Daily Tribune, August 25 1891).

The Calumet and Hecla Mine grew to be one of the largest in the country at the time.  The mine required the toughest and most rugged workers in the country.  With brutally dangerous conditions and the looming threat of a cave ins, the Hecla Mine needed experienced employees that can perform well under stress.  An officer that served on the Kearsarge was a perfect fit.  The Battle of Cherbourg put the Kearsarge on the map.  Serving on the Kearsarge when they overcame the odds and defeated the Alabama, gave the officers a hero title as well as celebrity status.  Naming the town after the beloved ship because of the formal naval officer working there was a perfect fit.

Building of the Monument

The stone boat monument was built in 1933 and 1934.  The great depression hit the area extremely hard as mining was its only strong industry.  Copper prices were slashed by nearly thirty percent, which shut down the mines in the Copper Country.  The president at the time, Franklin D. Roosevelt, boosted the economy by creating the Work Progress Administration (WPA) which hired job seekers to complete various projects throughout the country. A WPA group built the stone boat as well a couple others in nearby towns.  While the stone boat is nowhere near an exact replica of the Civil War ship the USS Kearsarge, it serves as an attention grabber for the Veterans Memorial Park.

The monument also pays tribute to the naval vessels named after the famous Kearsarge.  The USS Kearsarge battleship (1900-1920) served from for twenty years in the early years of the 1900s.  Serving as part of the Great White Fleet and eventually was involved in operations in Vera Cruz, Mexico.  The ship was built for coastal defense, equipped with many turrets of varying sizes. The ship then went on as a training vessel for the U.S. Naval Academy.  It then retired from the navy in 1920 and was outfitted with a crane to become a cargo type boat and was scrapped in the 1950s.

The USS Kearsarge Aircraft Carrier was the next naval ship to bear the name.  It served from 1946-1970 and was assigned training assignments on the east coast.  It also was deployed for the Korean War and Vietnam War, serving as an attack vessel to an anti-submarine carrier. The ship also helped in the recovery of spacecraft.

The most recent ship is the USS Kearsarge Aircraft Carrier LHD-3, which is still serving today.  This boat is a full-on war machine, capable of landing various aircraft as well as perform assaults. The main service is to serve as part of the Marine Expeditionary Units.  This ship is commanded by Marquette native, Captain Luke Parent and its sister ship (USS Wasp) commanded by Calumet native, Admiral Leonard F. Picotte.  The Kearsarge inspired many people in the Copper Country and having a monument and town commemorate its success is very fitting.

It is very interesting to note the technological advances throughout the variety of boats that have held the name Kearsarge.  The stone monument would mostly represent the original Kearsarge, although it doesn’t accurately represent it.  The Kearsarge was ahead of its time with their dual Dahlgren guns as well as their makeshift cladding.  That same technological superiority is represented when the next ships were built.  The current Kearsarge is fitted with all the bells and whistles, powered by nuclear energy.  The new Kearsarge is essentially a floating city being able to support itself for weeks.

The monument is located along US-41 in Kearsarge, Michigan.  The stone ship is the focal point inside the veteran’s memorial park.  The park gives a brief history of all the Kearsarge naval vessels past and present.  There is also a wall of remembrance for residents who lost their lives in combat.  The park gets many visitors as tourism is very big in the Copper Country.  Inside a history-rich region, the Kearsarge monument is a must-visit attraction.