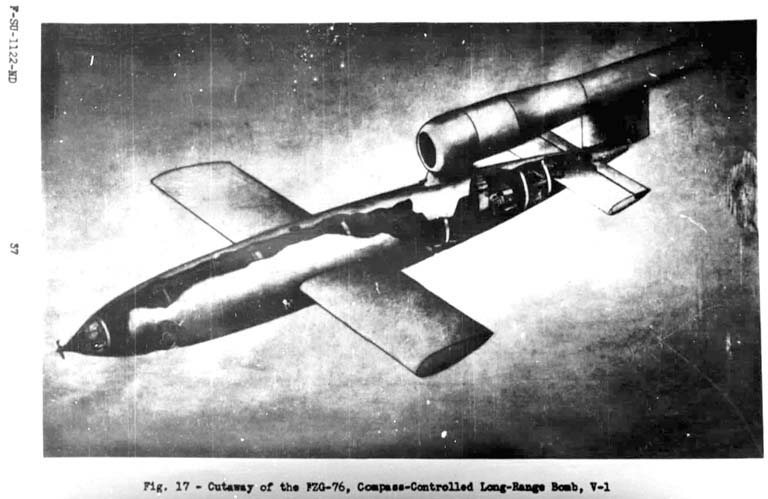 The V-1 flying bomb or Vergeltungswaffen-1 (“Vengeance Weapon 1”) as it was known by the Germans, was the world’s first successful and practical cruise missile. While the V-1’s time in the war was short-lived, the technology used was very important and help further the development of the missiles and aviation of today.

The V-1 flying bomb was originally designed and manufactured in Germany by Fieseler. At first, pilotless aircrafts were being used for surveillance by the German army. It wasn’t until the late 30’s early 40’s that the idea to use this as a bomb came up. “The idea of converting small airplanes in to pilotless bombs is nearly as old as military aviation.” (Zaloga 2003, 3). Unlike other aircraft of this time period, the thing that sets the V-1 flying bomb apart from most aircraft was, rather than having it be powered by a propeller, the V-1 had a jet engine. The only problem with having a jet engine was the need for air to cause ignition. Because of this It could not operate at lower speeds. “A ground catapult boosted the V-1 to 200 miles per hour, at which time the pulse-jet engine was ignited” (Stephen, 2018). With the V-1 having such a high speed, it made it very difficult for allied aircraft to intercept. Whilst this gave the weapon an upper had it still had its draw backs. This biggest problem was the detonation process. A small propeller was attached to the aircraft and was setup to trigger the detonate process after a set number of rotations. This was followed by a rear spoiler deploying to force the bomb down. Since this system was unreliable, the V-1 had an inaccurate ability to hit its target.

The overall design is rather simplistic. The main part of the aircraft is essentially a large tube with pointed ends that measures a little over eight and a quarter meters long. The back has the jet engine attached. The aircraft also has a wingspan of just under five and a half meters. The Aircraft is also made almost entirely out of welded steel. The first thing to mention when looking at the design and process of the V-1 Flying bomb is the method of propulsion. The Jet engine. Before the Germans had the idea of making a pilotless bomb, the started work on jet propulsion engines since the treaty of Versailles had prohibited them from making certain types of combustion engines (Jansson, 2012). Another thing to consider about the V-1’s design is how it detonates. In the 1945 “Fuzing system of German FZG 76 Flying Bomb (V-1)” Report, Lt. Fogel mentions a section where he talks about how the bomb is detonated. Here it is mentioned that upon impact one of two things would happen. In the first case, the V-1 hits the ground head-on in which a nose switch is triggered and allows for the bomb to explode. In the event that the aircraft does not fit noes first but rather slides on its belly, a belly switch is flipped allowing for the explosion to take place. Next comes the problem of controlling the aircraft. With more traditional aircraft of this time, a pilot would control the vehicle’s movement but without a pilot, the V-1 had to use other methods. To get around not having a pilot the flying bomb used a set of three gyroscopes. To keep the aircraft heading to its destination, one of the gyros was fixed to an axis of rotation. These gyros could than be used to move elements of the aircraft, such as the tail and wings, to guide its movement and keep the aircraft in line with this fixed axis. A magnetic compass was also added to keep the aircraft aligned since the gyros would tend to vary of its fixed axis. A metallic capsule was also implanted that would expand with lower atmospheric pressure which allowed the aircraft to know its elevation. Although this somewhat complex and automatic system my seem to make the V-1 an expansive aircraft, this is the complete opposite. The V-1 was made as cheaply as possible and what thus a weapon that was mass-produced which allowed from more than 9000 to be launched (Jansson, 2012)

V-1’s Usage and Other Information

Since the V-1 Flying bomb was limited on its range and wasn’t implemented in to the war until the mid-1944’s, the primary target for the bomb was England. “More than 8,000 V-1s were launched against London from June 13, 1944, to March 29, 1945” (Augustyn 2019). Additionally, as with the development of almost all new weapon technologies, the V-1’s development was kept a secret. This is made obvious as the front cover of FZG 76 Geräte-Handbuch has the word “Geheim!”, which is German for secret, stamped on it. The next page also has a warning that roughly translates to “This is a secret object Abuse (or misuse) is punishable)”. The V-1 flying bomb was a secret weapon, but the allies eventually found out about it. Allied aircraft had done some surveillance fights over the coast of France where they spotted, what was at the time unknown, many different sites that contained the V-1’s lunch rail. Shortly after the allies pieced together their intel and confirm the existence of the Flying bomb. The Germans responded to this by changing the V-1’s lunching system by making the rails simpler in design. This also made them harder to locate. Lastly, because the V-1 was a literal flying bomb that was launched from a rail, it needed some built-in safety features. The most notable was a timer-like device that would prevent the bombs from arming until a set time had passed. This was so in the event that the V-1 did not get enough speed from the launch rail or simply fell off, the triggers would not activate. Lt. Fogel’s report mentions that the debris of crashed V-1s at multiple launch sites shows that these safety devices work a majority of the time.