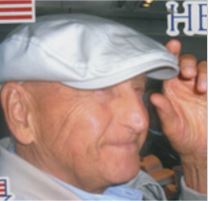 Scouts in World War II were crucial members of the effort, allowing platoons to get a visual size on potential adversaries on the battlefield. Felix Lupinski was a volunteer, who’s patience and skills were recognized in the short span that a troop was trained through and was held to be a scout. The Journey that Felix experienced in this war is nothing short of interesting.

The year is 1941, the third year of the war is still in progression, and although the U.S. hasn’t quite declared its place in this war, it was soon going to. On August 29th Felix Lupinski took a ride from his small town of Lincoln Park to Detroit, Michigan, where he Enrolled and was then shipped to basic training for the U.S. Army. Felix was greeted with the standard training infantry men see when they come to fulfill their role in the United States Army. It was during this time that Felix’s Superiors saw his skills with a rifle, his intelligence. keen eye, and patience on the training field. Another aspect that they also noticed was that, with Felix weighed roughly 155 pounds when he enlisted, his body type would be better equipped with remaining out of enemy sight. With this recognition, the choice was made to keep Felix behind for extended scout training.

Within this training Felix was to become better versed in the duty and mindset that a scout of this era was to have to fill the role. A scout should present excellence in more than one way; reliant, persevering, and patients are all vital aspects that a scout should present for making a good scout. The main purpose of a scout is exactly how it sounds: scouting out the enemy lines and positions for a measure of what was in store for the platoon that was about to engage in combat. This means that it is vital that a scout maintains the element of stealth on the battlefield for his best chance at success; having the ability to use his grounds and cover as an effective means of camouflage is key, as well as accurately obtaining information to report.

The important aspects of observation can be summed into the simple acronym ‘SALUTE’, which breaks into: Size; the size of the enemy force, Activity; the movement and actions that the enemy force is enacting in, Location; what is the enemy position and what possible landmarks are there that give any advantages/disadvantages on the battlefield, Unit; pertaining to the composition and type of troops observed, Time; the time of day when the enemy was spotted, and Equipment; the load out of the enemy, pertaining to things like machine gun nests and artillery. [2]

Equipment and special knowledge of a scout

While a scout was loaded with the same rifle and held most of the same equipment as infantry, there was special equipment a scout was to have. Stealth is a major player in this role, so a scout was to have non-reflective clothes in the day as to never be easily spotted, usually a form of camouflage to blend with surroundings. Sometimes, this called for the scouts to find means of camouflage, using given materials. When night scouting, the loadout should be changed so that the scout is warm and not affect how the scout moves. They usually would wear wool garments for warmth, but if the wool was torn it wouldn’t be terribly loud. The scout also needed special mapping equipment, as they were expected to relay their information to such a degree of accuracy. They usually had forms they would fill out with information about their observations.They were almost always equipped with a compass, however if they did not, they could use a pocket watch and the time of day to orientate their direction or use the North star and a few other smaller stars to get an accurate orientation..

Interestingly, and something Felix never disclosed, the United States has him listed to be born in 1917, when he was born in 1924. His correct last name is also Lupinski, but the military has him listed as Lipinski. [4] Whether this was in fact intended by Felix to be able to enlist early into the military (this would make him 24 when he enlisted) or not, is information that can only be known by Felix, as he hadn’t disclosed this information with anyone. Regardless, for a 17-year-old boy, the information that a scout was to take on can be none short of overwhelming, and the discipline to execute the position was twice-fold in importance. Felix accepted his role and proceeded through training and was put into action. Serving his integral part within his platoon.

He had gone the following three years without incident, having a role in the Normandy Invasion. On June 16th, 1944, ten days after the initial Invasion, Felix was in the countryside with his Platoon when his training was requested to clear a field. Of course, going from 17-years-old to 20-years-old, spending most of his time in military service, Felix could’ve been said to have gotten less mentally equipped for his position, as factors such as missing home could affect him. When clearing the field, Felix was forwarding his position in prone, when machine-gun fire started raining around his position. He made the mistake of rolling onto his right shoulder, exposing the left side of his body to the enemy when a bullet entered his abdomen and exited out of his back. The bullet missed all vital organs, and Felix was able to roll onto his back, just inches under the line of fire that just hit him. If he was to raise his body at all, he risks having another bullet skimming or doing worse damage to him. Unfortunately, he landed on his med-pack and to get it meant facing that risk. So, laying on his back, using his hands to keep himself from bleeding, there wasn’t much to be done.

Felix’s captain had informed him that if such a thing was to happen to him, they would make their way to his position and get him out of the conflict. Executing on his promise, his captain pushed to retrieve Felix. After a couple hours of fighting, his platoon made it to his position, retrieved him and made an ample exit out of the conflict. His Captain and Lieutenant both got shot in this endeavor, but fortunately both made it out and were able to survive.[1] This conflict earned Felix his purple heart medallion for being wounded in combat, seen in the display case in the commemorated for his military service. Following this injury, Felix spent some time in the hospital before going back into the service, and when released he remained in service until the end of the war.

Fortunately, Felix was not injured in combat for the remainder of his time in the military, however his platoon had seen a shortage of food that lasted almost 20 days. Felix went from being his normal 155 pounds to losing roughly 35 pounds and weighing at just 120 pounds. This was the real final hardship Felix had to face with the military, however due to his extreme weight loss the military refused to clear him for release and made him put the weight he lost back on. He ate as much as he could in hopes of being released, and he eventually put the weight back on and was cleared. On the day that Felix walked away from the military, he had waited some while for his father to come along and take him home. With this never happening, he got along walking back to Lincoln park, where he found his father in a bar, and proceeded to help him home. [1]

After the military, Felix had proceeded to live out a long life, having children and then seeing grandchildren. When the children would ask about his scars, he would tell them that it was a second belly button and didn’t share his stories until he saw this information fit to share with his grandchildren. In 2019, Felix had past at the age of 95, he served his country with dignity, and his role as an infantryman specialized in scouting will always be a part of the United States history of World War Two.