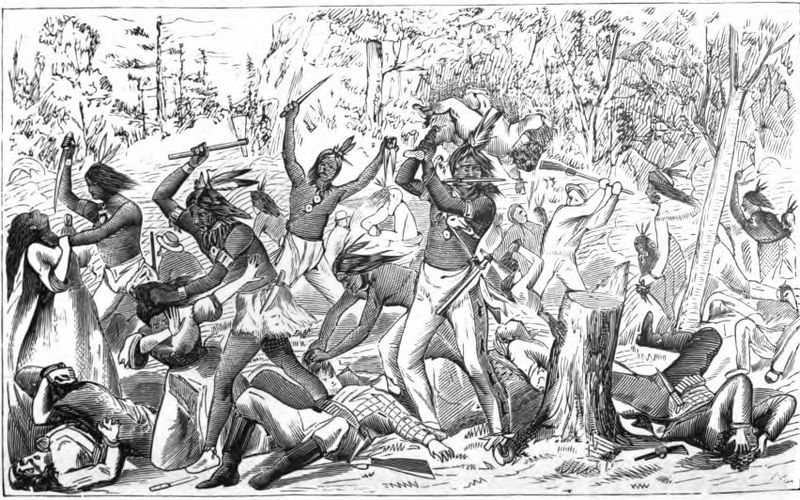 The Indian Creek Massacre was an incident that took place on May 21st, 1832 during the Blackhawk Wars in a town called Earlville, Illinois. The massacre was one of the battles across the Midwest that was used to justify the Black Hawk War. During this time settlers felt the Indian Creek Massacre had been sanctioned by Chief Blackhawk himself. But it was later understood that Blackhawk himself had nothing to do with this encounter. A monument stands today to mark the site. The Indian Creek itself begins near Paw Paw Grove in Lee county, and menders 52 miles in the southeasterly direction through many groves and prairies eventually emptying out into the Fox River. The creek in many areas has high banks and steep slopes that level off to wooded areas and open prairies. “This creek was especially beneficial to the Potawatomie villages due to a large number of red-tail carp and other fish the Indians depended on for much of their food in this region. “[1]

Prior to the Massacre

The Blackhawk War was a series of battles along Northern Illinois, Iowa, and the Southern Wisconsin border that was in retaliation of the Treaty of St. Louis, (1804). This treaty resulted in many of the Sauk tribes forming alliances with the British in the War of 1812. Within the treaty,

“Native Americans tribes gave control of their land that was bounded by the Mississippi, Illinois, and the Wisconsin rivers over to the United States and in return, the tribes got paid for the land. Also, the tribes did not have to leave the land they could hunt and live on the land as long as the government-owned the land.” [6]

With increasing tensions and the population growing within Illinois, the land that was once bought from the Native Americans by the government was put up for sale to be purchased by the civilians of Illinois. This led to increased conflicts between Native American tribes and settlers. This was largely due to the doctrine and belief of Manifest Destiny that settlers in the United States had the God-given right to expand their lands and settlements throughout the American continent. On May 28, 1830,

“the Indian Removal Act was signed by President Jackson. The Act allowed the government to divide land west of the Mississippi to give to Indian tribes in exchange for the land they’d lost. The government would pick up the cost of relocating the Indians and helping them resettle. The Indian Removal Act was controversial, but Jackson argued it was the best option since settlers had rendered Indian lands incompatible with sustaining their way of life.” [7]

The Indian Creek Massacre took place on the Davis settlement. “In 1830, William Davis, a Kentucky blacksmith by trade, was probably one of the first white settlers to acquire some land along the Indian Creek in northern LaSalle County.” [1] He was quick to realize the potential this area had with the farmland yet to be touched by a plowed, the trees providing plenty of lumber for settlement and fuel for a fire, and the natural spring providing the water necessary to build a settlement. The second family to gain land in this area was the Hall family, “who consisted of William Hall, his wife, Mary 45, his three daughters Sylvia, 19, Rachel 17, and Elizabeth 8. There were also three sons John, Edward, and Greenbury.” [1] The two eldest daughters would eventually play a significant role in the events subsequent to the massacre itself. By the year 1832, the settlement had grown to about thirty members in count. In order for the Davis settlement to generate power, William Davis constructed a dam across the Indian Creek to provide that energy. “About seven miles northwest of the Davis homestead was a small Potawatomie village near Paw Paw Grove. After Davis completed the work on his dam, the Indian villagers noticed there were no more fish, which they relied on for a food supply for the entire village.” [1] The Indians confronted Davis about this and were left insulted by him and the new settlers. As a result, the Indians made do with walking past the Davis settlement downstream to conduct their fishing for the village in the following week. After some time, the Indians stop fishing downstream altogether. With prior experience of Indians, Davis knew that this could be a sign that the tribe might be planning actions towards his settlement.

Shockingly enough, the Davis Settlement was warned of a massacre potentially happening prior to the incident on May 21st. The Native American Chief Shabona tried to warn them, “immediately after the breaking up of the Indian council after the defeat at Stillman’s Run, Shabona rode in post-haste to the Davis Settlement and warned the people of the danger of an Indian Massacre… The Indians did not make the expected raid, and slowly the settlers did not make the expected raid and slowly the settlers returned to their homes.” [2] The entire settlement gave Davis grief for running and hiding his people from the Indian tribe. Davis vouched to his people that he would never show a cowardly act like that again. On May 21, 1832, William Davis was on his way back from a store and ran into his wife and children packed up on wagons. The settlers said, “they thought they had seen some Indians and so they were not taking any chances. Davis reminded them they had plenty of firepowers and well-built cabin for protection, and also that they had been ridiculed before for fleeing their home.” [1] The settlers were right in what they saw as at approximately four in the afternoon,

“about 70 in number, were seen crossing Mr. Davis’ fence, about eight or ten paces from the house. As they approached Mr. Pettigrew attempted to shut the door but was shut down in doing so. The savages then rushed in and massacred everyone present in the house area, except my sister and myself.” Rachel Hall recounts. [3]

Due to shock the Hall sisters could not recount certain actions throughout the massacre, “We were trying to hide and get out of the way, while there was no place to get” Indians seized them and dragged them out of the cabin where the youngest Davis boy was being executed. Nearly petrified the Hall girls were conducted to horses in the timber, forced to mount, and carried off in captivity.” Not everyone who was a part of the Davis settlement was within the housing area. Members were in the fields working and understood what was going on from a distance because of the previous warning from Chief Shabona. Along with others who were in the blacksmith at the time of the attack but were unable to get to their weaponry in a few buildings over. There were believed to be sixteen causalities during the massacre, “but there was a discrepancy in this instance from the fact that the brother of the Hall girls was missing after the massacre, and was believed to have been killed, but who escaped from the Indians and thus was alive.” [8] Word quickly spread throughout the counties in Illinois of the massacre and the brother of Sylvia and Rachel, John, was working towards finding his sisters through organization of militias.

John was able to gather some civilians from the Ottawa settlement nearby but eventually, he enlisted in the army because he thought it would give himself the best chance to gain information on his sisters. Later, “The relief party found that sixteen whites had been massacred on Indian Creek, many of them hung like butchered pigs. The women had been slung by their heels to the outer wall of the cabin, their dresses falling over their heads. In this position, their naked persons were exposed to the public gaze-doubtless considerable.” [4] This was an act of hatred and vengeance by the Potawatomie tribe, a common tactic used by settlers in some areas of the country on reservations as Indian-Settler conflicts intensified throughout the next few decades. Once word got out, General Atkins announced that there would be a substantial reward in turn for the Hall girls. On May 29, 1832, “Henry Gratiot, an Indian agent whom established a positive relationship with the Winnebago community, travelled to Winnebago camp at Turtle’s grove to inform Chiefs White Crow and Whirling Thunder that they wanted these chiefs to negotiate with Potawatomie and Sauk for the release of the Hall sisters.” [1] While this was going on, the Hall sisters were making their way north with the tribe under horrific conditions. They were taken captive and strapped on the ponies of the Indians and headed north on their travel,

“the third day of our suffering, we were very much exhausted, and still we must obey the savage murderers, and while traveling now, we were separated from each other during traveling hours, under charge of two squaws to each of us, and being permitted to stay together when not on the march under the direction of our four squaws, we now traveled slowly over rough, barren prairie land until near sundown, when we camped again, being left with our four squaws, with whom we were always in company, day or night, they sleeping on each side of us during the night.” [5]

The Winnebago chiefs traveled at Black Hawks Grove to negotiate a trade for the Hall sisters,

“Whitecrow and Whirling Thunder, two Winnebago chiefs, began to negotiate with the Sauk for the girls while sitting around a campfire, and they discussed some of the goods that were brought for the trade. One of the Sauk chiefs went to Sylvia Hall and led her by the hand to the campfire and said she would be allowed to go with them, but not her sister.” [1]

Sylvia pleaded with the chief and stated that she would not go anywhere without her sister. Eventually, through negotiations, the Winnebago chiefs were able to add an animal to the trade for both sisters to come with. Afterward, the Hall sisters departed with Gratiot and continued on to Oak Springs about ten miles from Galena, Illinois where they were in for a surprise. Their brother John, “whom they had thought had been killed at Indian Creek was there to greet them, He was serving as an officer at Fort Galena.” [1] Although this incident was later known as small and often overlooked in a historical sense, it was not a decisive battle in a war that led to something else in another war. But it was a common representation of how numerous encounters between settlers and Native Americans played out prior and during this time. That is the significance of this incident in history. This is a small town in Northern Illinois, who got a dose of what some areas of the country were dealing with in the relocation and handling of Native American Tribes. Unfortunately, it was the reality of this time and a tragedy that history has to show.

[2] Scanlan, C. M. (2002). Indian massacre and captivity of Hall girls: complete history of the massacre of sixteen whites on Indian Creek, near Ottawa, Ill., and Sylvia Hall and Rachel Hall as captives in Illinois and Wisconsin during the Black Hawk war, 1832. Bowie, MD: Heritage Books.