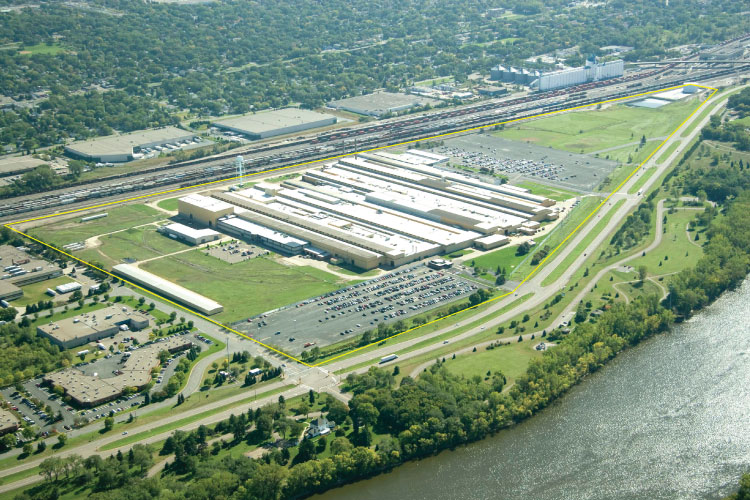 This article contains an in-depth look at the facility that was attached to the BAE (British Aeronautical Engineering) building and BAE building itself in Fridley, Minnesota. Specifically, the MK 45 naval gun, which is a naval artillery gun. Mounted on destroyers, DD-963 Spruance Class destroyers (decommissioned) and DDG-98 Alreigh Burke class destroyers, such as the USS Forrest Sherman. This article will address the journey of the factory from creation to the present day, including the switches in ownership. Touching on the type of armaments, both the MK 45 (MK 45 5”/54) and others, that were produced there and their importance in modern warfare. Also touching on the future weapons systems that are being designed there. Lastly, how the US military/government outsources through the private industry for much of their equipment using this factory as a primary example will be covered along with how this outsourcing requires sufficient sub-department agencies. This factory, specifically the weapons produced here, have been a continuous provider of defensive advantages to allied ships in the last half-century.

History of the Facility

The original factory was in Fridley, Minnesota right along the banks of the Mississippi River. Even though this article is about BAE Systems and its naval guns the story originates with a different company: Northern Pump back in the 1940’s (BAE Fact Sheet). The company/factory was built to help with the critical need for naval guns in the lead up to the U.S. entry to WWII. They were able to produce five hundred gun mounts within two years and earned numerous awards for efficiency and conduct by the Navy. These awards are distributed by the Office of Naval Research Best Manufacturing Practices (BMP) whose main goal is to “increase the quality, reliability, and maintainability of goods produce by American firms” (Report of Survey Conducted at United Defense). Just to highlight the importance the military puts on its contractors. The factory peaked in employment, near the end of the war, in 1944 with 11,600 workers (BAE Fact Sheet). The facility changed ownership multiple times over the years finally ending up in control of United Defense, a Philippian defense contractor who was later bought out by BAE in 2005. Initially, United Defense produced the MK 45 naval gun in the early 1960’s right after initial development and continued to physically produce the guns up until the 1990’s. The main need for the MK 45 came from the Spruance class destroyers (DD-963 Spruance-class). BAE eventually bought United defense but continued to design and engineer the MK 45 and other systems such as the MK 41 VlS (Vertical Launch System). They currently employ around 600 people, mainly engineers and contract managers (BAE Fact Sheet). The Fridley Branch works closely with sister sites in Aberdeen, South Dakota, Louisville, Kentucky, and Sterling Heights, Michigan.

Today’s naval systems are much more integrated with each other than ever before, rightfully so, since they face numerous threats. Enemy watercraft, submerged and unsubmerged, and missile threats are all examples of the threats they may face. The increase in integration the MK 45 played, and continues to play, is a crucial role in both defense and attack capabilities. To understand the importance of the MK 45 gun you need to understand its place in the system around it. The MK 45 is considered part of the active measures to deter cruise missile threats (Johns, Richard 1996, ix). It is also responsible for “Naval Surface Fire Support” (BAE Systems 2019). While the MK 41 VLS is responsible for protection and firepower against “discrete aircraft antisubmarine warfare, strike, naval surface fire support and ballistic missile defense missions” (BAE Systems 2019). In a thesis report from the Naval Postgraduate school in the Monterey, California, Richard O. Johns reviews the antiair capabilities of Spruance Class Destroyer. The Spruance Class had two MK 45’s mounted on the destroyer one on the forecastle (front) and one on the fantail (back) (Johns, Richard 1996, ix). These two provide 360 degrees of protection around the ship. They also act at the second to defend against incoming threats in terms of range. With the initial being a SLQ-32A, Electronic Countermeasures, then NATO Seasparrow Missile System, then the MK 45, followed lastly by Close-in-Weapon Systems (Johns, Richard 1996, ix). The MK 45 gun can fire multiple projectiles, chosen by the Control officer, but primarily uses a blast fragmentation warhead. Richard Johns found the probity that the MK 45 kills its designated threat to be .58 (Johns, Richard 1996, ix). He also found the probability of the combined defense systems destroying the target to be .943 (Johns, Richard 1996, ix). Both these percentages are measured out a scale of one. As shown above, in the details provided in large part due to the close analysis by the Naval Postgraduate school show that MK 45 is a very effective tool at knocking out incoming air attacks. This is also evident in the fact that the MK-45 outlasted the lifespan of the DD-963 Spruance Class and continues to serve on the USS Forest Sherman, and DDG-98 Alreigh Burke class destroyer, with no sign of decommission anytime soon.

The MK 41 VLS is a more recent product from BAE. Partly designed at the Fridley location it provides a vital component to any Naval attack force, being primary mounted on Missile Cruisers and Destroyers including the Ticonderoga Class (CG 47) and Arleigh Burke Class (DDG 51). To avoid confusion, the VLS’s that the Fridley location designs are just the launch systems, they aren’t the actual misses/rockets (even though BAE does some of that). Its description is obvious. It launches rockets/misses that are stored under an armored deck vertically into the air, while consisting of an eight-cell launcher module with the capacity to prepare two missiles at once. It’s main targets consist of Anit-Air, Anti-Submarine, and Anti-Surface warfare (Schneider, Jr L). Compared to the MK 45, the MK 41 is more of an attack unit rather than defensive one. It’s capability of launching different types of rockets simultaneously allows the ship it’s on to have “first contact” capability (Schneider, Jr). The value this first contact attributes has in the modern world of highly destructive armaments cannot be understated. It allows for the possibility to achieve a quick and devise victory against enemy targets. Whether it be submarines, aircraft, or land-based targets, when these two weapon systems are used in tandem along with the other weapons systems on board the Navy’s ship can allow for a decisive combo that allows for the upper hand in engagements.

BAE has mentioned two futuristic projects of interest that are in the process of design and testing. One being hyper-velocity projectiles which would be capable of enhanced range and better precision. This high-velocity munitions wouldn’t typical explosives, instead, the force of the impact would cause enough damage. The other being an Electro-magnetic railgun that is capable of sending projectiles up to 220 nautical miles (Electromagnetic (EM) Railgun). These railguns would utilize the hyper-velocity projectiles. Further information is classified therefore, there is no way to know the Fridley locations’ role in these weapon systems.

Nevertheless, BAE is a defense contractor who gets contracts from governments, in this case, the U.S. Those contracts are then fulfilled by producing weapons and weapons systems. Today they are a large multinational corporation and have a revenue of around twenty billion dollars as of 2018. They are a prime example of the military-industrial complex and its relation to the United States after WWII. Specifically, in the global force that the United States started to maintain and continues to. For the purpose of dealing with perceived threats. The start of today’s military industrial complex can be traced back to the days immediately following the end of WWII. Immediately following the fall of Nazi Germany, the western world moved on to the next great threat – communism. This can clearly be seen in the events of the cold war; examples include the Berlin Wall and the constant threat of Nuclear War. This struggle can also be seen in the continued involvements that the U.S. was involved in including Vietnam and the Korean conflict. All along, the cooperate defense entities within America were with the U.S. forces.

“It is not a stretch to believe that the armaments industry – which profits not only from domestic sales but also from tens of billions of dollars in annual exports – manipulates public policy to perpetrate itself” (Dunlap, Charles J).

The initial purpose of outsourcing military products was to: help rally the American population around the concerned threat and ease tension on the government so they can better focus on the task at hand (Dunlap, Charles J). This type of outsourcing can be also be seen in the continued partnership between the U.S and BAE systems. This properly illustrates the role these companies play in helping fight threats to the country and to help illuminate the power these companies hold. With the total U.S. defense budget now nearing one trillion dollars, the partnerships between the U.S. and BAE cannot be ignored when discussing the Americas modern forces (Dunlap, Charles J). Other major players in the military-industrial complex include Lockheed Martin, Boeing, and Raytheon.

Looking at the BAE facility in Fridley, Minnesota provides a unique insight into the complicated nature that is modern warfare. Specifically, the design and production process that allows America to continue to have the upper hand in engagements. These relationships allow the U.S to provide the needs for its armed forces. The MK 45 and the MK 41 VLS are great examples of the advanced systems that BAE produces for the U.S. armed forces. Not only do they provide the U.S. with supreme equipment but also provide good high paying jobs for Americans in todays. Today’s military engagements simply wouldn’t be possible without the support that the BAE and companies like it provide to America and her allies.

Published in Artillery and Naval