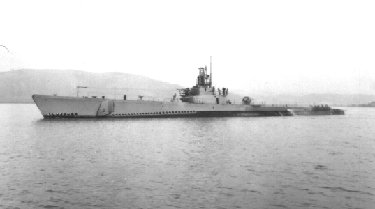 The USS Cod (SS 224) is an iconic Gato-class submarine that served the United States Navy throughout the duration of World War II and was later used by the North Atlantic Treaty Organization (NATO) for training purposes. With the outbreak of fighting across the European Theater and our intervention inevitable, seeing the effectiveness of German U-Boats currently and in World War I, the United States began to shift their technologies towards submarines as well. The Gato-class submarine was the first submarine class mass produced by the United States in World War II, encompassing a large portion of the U.S. Navy fleet at the time, and designed for lengthy missions in the Pacific Ocean. The use of submarines by the Americans allowed for a blockade against the Japanese, preventing the island nation from importing much needed raw materials, such as food, oil, and iron ore. In the summer of 1942, on July 21st, the start of the construction of the submarine was officially recognized (also known as laying the keel). Just a short eight months later, on March 21, 1943, she was launched, not being commissioned into active service until an additional three months later on June 21, 1943, under the command of James C. Dempsey. While not one of the most well-known ships or submarines from World War II, the USS Cod served an important role for the United States Navy in a variety of way during the war and was involved in a unique operation in her last patrol, one never performed before on the international level.

During its tenure with the U.S. Navy in World War II, the USS Cod served seven different war patrols, were it was busy with a variety of tasks, including spotting and attacking enemy vessels. Often, in each patrol, the submarine was active for a few months at a time (roughly 60 days) before returning to port for refitting. Under a total of three captains throughout her service (James Dempsey (patrols 1-3), James Adkins (patrols 4-6), Edwin Westbrook Jr. (patrol 7)), the USS Cod served in both the South China Sea and East China Sea, as well as the Gulf of Siam. Most commonly, the Cod traveled to Fremantle, Australia after each patrol, but it also saw refitting at Pearl Harbor and in Guam (Fleet Submarine, 2018). Refitting allowed for the submarine to refuel, resupply, and adjust the crew as need be. The USS Cod was armed with ten torpedo tubes, six in the front of the submarine and 4 in the rear (aft). It carried an additional 14 torpedoes to reload, for a maximum total of 24 torpedoes at a time. In addition to torpedoes, the Cod was equipped with a 4-inch gun (50 caliber), a 5-inch gun (25 caliber), additional .50 caliber guns that could be stored and pulled out for use when desired, and multiple 40mm and 20mm antiaircraft guns (National Park Service, 2000). To operate the submarine and its armament, it was originally designed to carry 72 enlisted men and 8 officers, but was often overcrowded, regularly housing 97 total crew members at a time (World of Warships Official Channel, 2019). This was in part due to a variety of changes made throughout its service in the war, with the frequent addition of new equipment and armament. While the USS Cod was comparable to most Gato-class submarines of the United States Navy at the time, it was often packed to the brim with crew and armaments for many long weeks at a time.

In addition to the tight spaces onboard, the Cod also saw a large amount of activity during its seven war patrols. As logged by Richard “Red” Stevens, a crew mate on the USS Cod for the first six patrols in World War II, the “Cod’s deck guns fired 117 rounds of 4-inch, 50-caliber; 117 rounds of 5-inch, 25-caliber, 1,404 rounds of 40mm, 200 rounds of 20-mm, and 1,450 rounds of .50-caliber machine gun ammo” (USS COD Submarine Memorial, 2019). In addition, the Cod fired a total of 122 torpedoes, recording 39 confirmed hits. Throughout the course of the war, the Cod was equipped with three different types of torpedoes. As stated in the video Naval Legends: U.S.S Cod. Part 1, she was armed with Mark 14 steam-propelled torpedoes, Mark 18 electric torpedoes, and Mark 23 steam-propelled torpedoes.According to the skippers of the Cod, they sank ten enemy ships (Japanese destroyers, tankers, and freighters) and damaged an additional five with torpedoes, as well as sinking 24 junks (a type of Chinese sailing ship dating back to the Song dynasty, but still in use today), and 11 floating mines through gun fine. On top of the gunners, there was also a group of lookouts aboard the submarine who were responsible for spotting enemy aircraft. Over the course of the seven patrols, over 400 aircraft were spotted by the crew through their own sign and on radar. During the length of the war, the USS Cod patrolled for a total of 415 days, of which the submarine was only completely submerged from dawn to dusk for 108 days, or roughly one in four days of service. Excluding miles sailed to and from the United States, the Cod covered a staggering 88,000 miles during her tenure with the U.S. Navy. While being apart of a variety of scouting activities and attacks on enemy vessels, the USS Cod made its presence known across the Pacific during her service in World War II.

On her seventh (and final) war patrol, the USS Cod was involved in a very exclusive event, being the only one of its kind ever performed. In the summer of 1945, on July 8-10th, as the end of the war was approaching, the Cod received a distress signal from a nearby vessel in the South China Sea. While sailing at full speed in the dead of night, the Dutch submarine HNLMS O-19 ran aground on a coral outcropping (Ladd Reef) and was stuck, vulnerable to any attacks from the Japanese and other enemies. Captained by Edwin Westbrook Jr., on July 10th, 1945, the USS Cod successfully rescued all 56 Dutch sailors onboard after two days of unsuccessful salvage attempts, hoping to save the vessel instead of destroying it. This incident made global news and history as the Cod became the first ever recorded submarine-to-submarine rescue on an international level between two different countries. A member of the USS Cod crew managed to film the historic rescue, which has since been placed into a historical footage archive (CritcalPast, 2014). After the rescue, the USS Cod unfortunately destroyed the Dutch submarine with “with two scuttling charges, two torpedoes, and 16 rounds from Cod’s 5-inch deck gun” according to curator onboard named Paul France (Naval History and Heritage Command, 2015). While it was unfortunate that the HNLMS O-19 had to be destroyed, it prevented any chance of the Japanese finding the submarine and salvaging it in any way for their own use. The USS Cod then traveled to the Subic Bay Naval Base to unload its newly acquired passengers, who totaled 153 people (including the original crew), much greater than the original design of an occupancy of 80 men. After dropping off the Dutch crew, the Cod returned to the coast of Vietnam to continue sinking Junks carrying enemy supplied to the Japanese. The final patrol ended on August 13, 1945, where she returned to her frequent home base of Fremantle, greeted by the men of the Dutch O-19, inviting the Cod crew members to a thank-you celebration. For her service, the USS Cod earned an astounding total of seven battle stars for its service in the war and credited with officially sinking twelve enemy vessels.

After serving her seven patrols during World War II, the USS Cod was mothballed in 1946, meaning that she was retired from active service in the United States Navy but the vessel itself was maintained in case there was a need for the submarine later on. In 1951, the Cod was recommissioned to help partake in anti-submarine training exercises with NATO. During this period, the Cold War was ongoing, so the USS Cod also found itself traveling to Cuba, South America, and St. John’s, Newfoundland for various purposes. While its service was temporary, the short lived revival lasted until 1954 when she was again decommissioned and placed into reserve for the U.S. Navy. Five years later, in 1959, the submarine was towed to Cleveland, Ohio, through the St. Lawrence Seaway, where it has remained to this day. Since the relocation, the Cod was reclassified twice, first as an Auxiliary Submarine (AGSS-224) in the winter of 1962 and then as a Miscellaneous Unclassified Submarine (IXSS-224) in the summer of 1971. Once classified as a Miscellaneous Unclassified Submarine (IXSS-224) on June 30th, 1971, the USS Cod was officially removed from the Naval Vessel Register, or the official inventory of vessels in ownership of the United States Navy.

Although no longer operating as a fierce naval submarine, performing an infamous international submarine-to-submarine rescue, or conducting training with NATO, the USS Cod is still in use today. After being removed from the Naval Vessel Register in 1971, and being relocated to Cleveland, Ohio, a group of local residents created a group known as the Cleveland Coordinating Committee to Save Cod in hopes to preserve the ship by turning it into a memorial. The USS Cod has since be docked and moored in Cleveland’s North Coast Harbor since, and will likely continue to be so for a long time to come. In the early winter of 1976, the United States Navy granted this, and the Cod officially began operating as a museum later that spring. Ten years after being recognized as memorial, the United States Department of the Interior selected the Cod as a National Historic Landmark. Currently, it is the only submarine memorial (and lowest numbered World War II submarine preserved) that is available for civilian visitor access that has not been modified, such as the addition of stairways and doors cut into the pressure hull, which is common. One slight adjustment that has been made over the years, however, is that the Cod is missing its deck guns, likely due to the fact that they were re-purposed for something else within the United States Navy. The Cod has also received multiple awards, being credited with sinking over 37,000 tons of enemy shipping (at least 12 vessels) and damaging an additional 36,000 tons of enemy vessels. In addition, as previously mentioned, the Cod received seven battle stars for completing all seven of her war patrols throughout World War II. This historic submarine may no longer be a fighting machine, but it provides a unique outlook on US technology during World War II and had a distinctive career with the United States Navy.