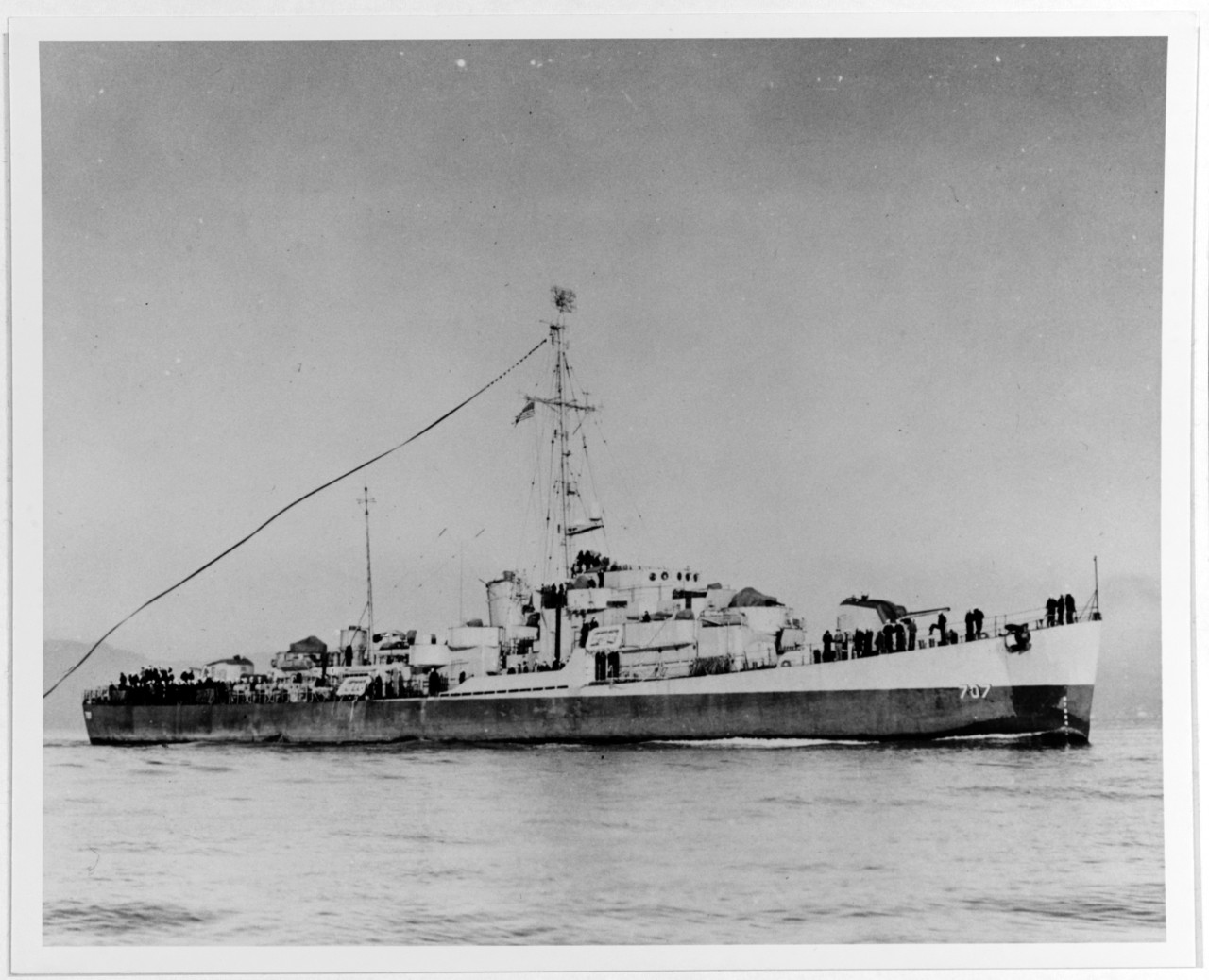 The USS Jobb was a Rudderow-class destroyer escort built by the Defoe Shipbuilding Company in Bay City Michigan for the U.S. Navy during the Second World War. The Jobb saw regular action in the Pacific theater during 1945 and 1946, serving primarily as an escort for fleets moving between reoccupied islands. The Jobb continued to serve in the Pacific during the allied occupation and demilitarization of Japan until the close of 1946. In May of that year, the Jobb was decommissioned into the Pacific Reserve Fleet and ultimately scrapped in October of 1970.

The U.S. Navy operated 22 Rudderow Class Escorts during the war, with their primary duties being fleet support and submarine defense. To execute such responsibilities, the Rudderow Class was powered by a 12,000 horsepower turbo-electric engine and had a top cruising speed of 24 knots. Rudderows were armed with torpedoes, various depth charges, AA guns, and 2, 5″ 38 caliber main guns12. The Jobb specifically featured two deck-mounted 50 caliber machine guns – procured from a U.S. Army base in the Philippines through trade – to ward off small gunboats that might seek to ram the ship2.

Rudderow classes were built by the Philadelphia Naval Yard and Defoe Shipbuilding Co. The Defoe Shipbuilding Company operated just south of the Saginaw River, on the edge of downtown Bay City Michigan. As Naval Warfare continued to ramp up with the fall of the Axis powers in Europe, Defoe Shipbuilding received more and more contracts to build ships that would fight in the Pacific. Defoe built the Rudderow Class using a newer, faster “roll-over” construction method wherein the hull of the ship is welded together upside down and then “rolled-over” for the remaining assembly and armament. This method of construction also led to better seam welds which increased hull integrity9.

Journey of The Jobb

The Jobb was a U.S. Navy Rudderow class destroyer escort named after WWII Pharmacist’s Mate Third Class Richard Patrick Jobb who was awarded the Silver Star during the Solomon Islands campaign after charging through 150 yards of Japanese sniper fire to render aid to a U.S. Army patrols that had been pinned down by machine gunfire. He treated the wounds of several soldiers before he himself was shot and killed in the engagement. The skirmish took place in the Mamara region of Guadalcanal in the Solomon Islands in January 194313. 14 months later on March 4th, 1944 the U.S.S. Jobb became the 14th of 27 Rudderow class destroyer escorts delivered to the Navy by The Defoe Shipbuilding Company5.

The Jobb was crewed and officially launched from New Orleans on Independence day, 1944 under the command of Lt. Commander Herbert M. Jones. Norton Goldberg would later be assigned to the Jobb in 1946 and would later recount a bit on his first impressions of the ship3, 4.

“I’ll never forget the pleasure I took in discovering I could go stem to stern below decks on Jobb, something that could not be done on [USS] Upshur [DD-193]. My sack was aft in Upshur, and the radio shack was forward. On more than once occasion, I was nearly washed overboard in heavy seas while going to my watch at night. Who would have known? And what could have been done had they known?”

Crewman Norton Goldberg in To War in a Tin Can: A Memoir of World War II Aboard a Destroyer.

From New Orleans, the Jobb sailed to Bermuda where the 221 person crew underwent shakedown training with the destroyer escort training task force stationed there. Crewmen and officers were drilled in procedure, form, and combat against aerial and submersible targets1. Training concluded in late August and the Jobb was ordered to Norfolk, Virginia to be outfitted with less dated, Mark 8 and Mark 9 depth charges. The USS Holt (DE-706), Rudderow (DE-224), and Hodges (DE-231), were also in the harbor to receive depth charge upgrades. The four ships would be assigned to Escort Division 74 and tasked with submarine patrols in the Atlantic7, but before upgrades could be completed, the hurricane struck the eastern seaboard. The Jobb was reassigned to the Paccific Fleet and subsequently directed to Humboldt Bay through the Panama Canal, finally arriving in New Guinea on the 21st of November.

The Jobb’s first assignment was a short convey escort trip to Leyte where she remained stationed through the 12th of December. The following day would prove to be one of the more eventful days of the Jobb’s service. Captain John B. McLean of the Destroyer Bush was tasked with leading a slow tow convoy of Army tankers and tug boats laden with barges full of gasoline and miscellaneous supplies from Leyte to the allied beachfront on Mindoro. Jobb, alongside the Bush, Radford, Halford, and Holt were assigned to escort the convoy. The whole ordeal was rather rushed with Captain McLean only receiving his orders 15 hours before the scheduled rendezvous. The Army’s dispatch also neglected to mention the convoy ship’s call signs, nor did they ever respond to an urgent dispatch from the Captain requesting the information.

Nonetheless, the Navy escort found the cargo vessels at the provided location off the coast of Leyte on December 13th, 0530. The Army ships had a hodgepodge of radio equipment with no shared spectrum so the convoy was forced to use megaphones and limited visual signaling to coordinate positioning. The Naval escort was “amused, but slightly upset” to find that most of the Army vessels had not received any further instructions from Army Command10. By 0600 the tugs had been organized into formation and the convoy began its journey, barley maintaining a speed of 4knots.

During the journey, the convoy was spotted by Japanese scouts and attacked several times by suicide bombers. The Naval escorts continually circled the convoy to best maintain full armament coverage at all angles. The escorts shot down five Japanese planes en route to Mindoro, two of which were brought down by the Jobbs AA gun crews10. The convoy would arrive in a timely fashion to resupply MacArthur’s troops who would go on from Mindoro to the island of Luzon and recapture Manila, the Phillipean capital.

Apart from a hurricane and two typhoons, the remainder of the Jobb’s journey was relatively uneventful. During 1945 she would successfully escort convoys of troops and supplies to the Lingayen Gulf, Palawan Mindoro, Morotal, and Mindanao in support of the Phillipean conquest. After the voyage to the Lingayen Gulf, the Jobb suffered propeller damage when sailing to close to a shallow reef and was forced to spend the latter half of January and half of February 1945 in Manus for repairs. In addition to escort duties, the Jobb was also participated in the Brunei Bay invasion at Borneo, though American forces encountered no resistance on the island so the operation went rather smoothly. Once the Philippines were securely in U.S. hands, the Jobb was assigned to patrol waters from the Philippines to the island of Ulithi in the Northwest for late July and early August 1946. With the Japanese surrender on the 16th of August, the Jobb sailed to Okinawa to provide support services during the occupation and de-arming of Japan. At the close of 1946, the Jobb sailed back to the U.S. to San Francisco and then on to San Diego where she would be decommissioned on the 13th of May, 194611.

Harold Smith was assigned to the Jobb for the 18th months she was at sea and would later tell a reporter of the Tampa Bay Times about his time on the Jobb. He was 18 when he enlisted and credits his time in the Navy for helping him mature.

“You don’t have a normal late-teen life. Having a mix of career military men, academy-trained officers, sometimes-illiterate shipmates, you have to balance your life in a very confined space.”

Smith shared a few anecdotes about his time on the Jobb, mainly remembering his fears while the ship was pounded by storms and hurricanes. Having worked in a shipyard in Baltimore before enlisting, Smith was far too aware of how close he was to the raging seas with only a ¾ in sheet of steel between him and the water. Smith would spend his entire Navy career on the Jobb and spend the rest of his professional life working in politics2.

While many destroyer escorts were sold to other navies around the world, the Jobb was moved to the Pacific reserve fleet in San Diego. After 25 years floating the Jobb was deemed obsolete in 1970 and sold for scrap6.