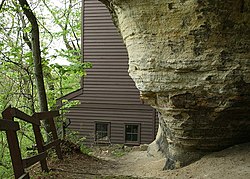 Here from 1832-1860 lead shot was manufactured by Daniel Whitney, who was a businessman that noticed the massive cliff and realized that it would be the perfect location for a lead shot factory. The lead shot tower was revolutionary in the field of creating munitions, most of the factories during this time had many impurities from casting which caused major problems for the people using these munitions. The Helena lead shot factory was one of the first in the country to create balls this way and it created a boomtown around the city of Helena producing millions of shots before shutting down in the late 1860s. “Helena began on its second site directly after the Black Hawk War”[2], allowing for even more production and boosting the town of Helena into the spotlight.

Location and How it Worked

The location could not have been any better not only because of the massive cliff but because of where it was on the Wisconsin River. The river allowed for easy transportation of the munitions out of the area to different distributors across the country. Along with being able to move the munitions around the country the water also was harnessed to move turbines to create energy for the factory to help with efficiency. The location got better because of the lead mines that were scattered all across the state, and while most mines had to be dug deep and use expensive equipment the lead in the area surrounding Helena was all on surface and with a pickaxe and a little bit of effort, they were able to gather the lead without a big expensive operation. The Lead shot was produced by taking advantage of the surface tension of lead. It was previously thought that liquid, when dropped, fell in the shape of a raindrop but in reality, because of surface tension, it falls in a perfect sphere, allowing the lead shot to from with no impurities. After being melted by the smeltery at the top of the cliff it then goes through a grate which allows for the different sizes that were needed during the time, it then falls 180ft off the cliff and into a pit that was hand dug by Daniel Whitney and one of his closest friends mainly using hand tools, no explosives were necessary in order dig it the rest of the way down. From there the lead shot is collected and put into boxes and sent to the finishing plant where they were tossed into a roller with heat underneath to smooth the lead shot up.

“The method used was the “Watts Method” named after an English plumber who, watching raindrops fall, envisioned droplets of melted lead falling in the same manner and becoming round as they fell. The process was simple. Lead, brought from Mineral Point or Galena in 75-pound bars called “pigs,” was melted in large kettles at the smelting house. Arsenic was added to make it brittle and to help it form into droplets. The melted lead was poured through a ladle with holes in the lid and dropped into a pool of water. The droplets cooled and became round as they fell. The size of the holes in the ladle determined the size of the shot and the larger the shot, the farther they had to fall.”[4]

The village of Helena went through ups and downs, and most of the success of the town was based entirely on the success or failure of the lead shot shaft. The amount of lead that was produced was what kept the town thriving, and when the shaft shut down for a little the town suffered because of it. At its height it was in contention to be the capital of the entire state of Wisconsin it was booming but eventually lead shot was used less and less until the land was eventually sold the land to Sheldon Thompson for ten thousand dollars, he then sold it to the Wisconsin Shot Company, who then sold it to Charles Townsend and John L. Kingberly who bought it for six thousand dollars, who then sold it to Washburn & Woodman of Mineral Point, for six thousand dollars. The value of the land and the shot tower just kept getting lower as time went on and the value of lead shot decreased from an all-time high in the 1830s to a low in the 1850s.[3]

The construction of the tower was interrupted by the Black Hawk War which was ravaging across the land that they were in. The Black Hawk war, a short conflict, occurred between the Black Hawk Indians and the United States, the goal of the Indians was to take back some of the tribal lands that had been taken with the Treat of St. Louis. “The indirect cause of this war lay in a frontier quarrel in which an Indian murdered a white man in a fit of jealous rage. The Indian was imprisoned… “While they waited in St. Louis in the hope that they might still obtain their friend’s freedom, Pierre Chouteau, a trader, furnished them with whiskey. While they were drunk, they were persuaded to sign a treaty by which they were granted an annuity of one thousand dollars and the freedom of the imprisoned Indian in return for the cession of more than fifty million acres.” [5]. The Indians in a miscommunication tried to go take their land back thinking they had the right to. The United States disagreed “Discontented with their life on the reservation west of the Mississippi, to which they had been removed, the Sacs, with several other tribes, resolved to recover their own hunting-grounds. The warlike chief, Black Hawk, was the head of the revolt, and his march toward the Rock River was signalized by a number of massacres” [5]. The U.S saw it like a wild group of Indians that were pillaging their way through the country to get back to the land that they had let go and that the white man now lived. If the situation was properly looked at, at the moment then there would have been no issue, they were forced to give up their land in a deal that should have been null, if the were able to get a lawyer during this they would have easily won their land back in court.

“Work on this project, begun in 1831, was suspended during the Black Hawk War. Parkinson’s narrative2 states that General Atkinson’s regular troops and General Dodge’s volunteers gathered at Helena on July 26, 1832, and there crossed the river on rafts in their pursuit of the savages. In Reuben G. Thwaites’s “Story of the Black Hawk War”8 it is stated that all the log houses in Helena were torn down and the material used to construct rafts for moving the army across the river.” [1]

They tried to refrain from violence and sent a formal protest to Washington to try to get their land back it went unanswered, the hate was so great for the Indians that even logic at this point did not bring the war-hungry country from looking at what they were saying. As Black Hawk wrote “Bad, and cruel, as our people were treated by the whites, not one of them was hurt or molested by any of my band.”[6]. After a party of Sauk had been killed by the Menominee the Sauk did what was a tradition and killed the people responsible for it, the United States demanded the murderers, the Sauk declined this and said that based on the tradition this was legal. The refusal put them in open rebellion with the United States Government. Causing them to call up a militia to deal with Black Hawk and his group of “rebels”. The militia was dying for something to do, they were bored and mad at the slow pace that the army was traveling they were ready for battle. They got the chance and after a drunk scouting party killed a couple of Black Hawks men, he responded by bringing the rest of his men up to the front ready to attack, as the US advanced Black Hawk “gave another yell, and ordered my brave warriors to charge upon them expecting that we would all be killed”[6], the US went running back without even firing a shot claiming that a force of over two thousand Indians were all around them. This battle was slight but had very large consequences, only 11 US soldiers were killed and 3 Sauk, but they were forced to retreat as General Atkinson advanced up the Rock River. After a couple more massacres in northern Iowa and into southern Wisconsin the US forces were close. General Atkinson stopped in Helena and there crossed the river chasing the Indians across from it, it is stated that. When the battle that took place on the Wisconsin river which was hailed as a victory for the Indians as they survived with five times fewer men then the US had, the remaining Indians tried to sail down the river and hope that they could slip past the fort that stood there, the Lieutenant that was there dispatched a force to intersect it and opened fire killing or drowning most of the people that tried to escape.

One of the battles that stood out in this war was the Battle of Wisconsin Heights on each side was a great commander, Black Hawk on one side and Henry Dodge on the other both smart and respectable men. This fight which took place on the Wisconsin River where the US army had torn down Helena shot tower to make it across was one of significance for the Sauk. Despite being outnumbered by a lot they sustained high casualty rates but were able to fight long enough for the rest of the fighters and women and children to escape downstream and both Black Hawk and Henry Dodge wrote about this fight.

“After consulting Genl Henry we determined to charge the enemy. . . . we dislodged him from his position & drove him down the height into the high grass in the swamp. Our fire was so heavy he soon gave way. . . . the enemy then gave way in every direction retreating to the river. The Winnebagoes scalped eleven Indians killed by the whites, and the whites took thirteen scalps last night–eight were found today and three were killed in the chase. The enemy was seen to carry a number from the field during the action so that the numbers killed cannot fall short of forty (perhaps more) many were wounded but the number is not known. We lost one killed & seven wounded, one of our men was wounded before the battle, on our march.”[7]

He saw it as in easy win but looking at it from the other side shows a different story.

“ In this skirmish, with fifty braves, I defended and accomplished my passage over the Ouisconsin, with a loss of only six men; though opposed by a host of mounted militia. I would not have fought there, but to gain time for my women and children to cross to an island. A warrior will duly appreciate the embarrassments I labored under–and whatever may be the sentiments of the white people, in relation to this battle, my nation, though fallen, will award to me the reputation of a great brave in conducting it. The loss of the enemy could not be ascertained by our party; but I am of opinion, that it was much greater, in proportion, than mine. We returned to the Ouisconsin, and crossed over to our people.”[8]

An absolute win was seen as a moderate victory for the Indians although they lost the battle it was seen as a remember the alamo kind of moment where yes they lost but they fought bravely and with distinction to allow for the women and children to escape, this itself brought great pride to Black Hawk who at this point was ready to settle for peace and go home.