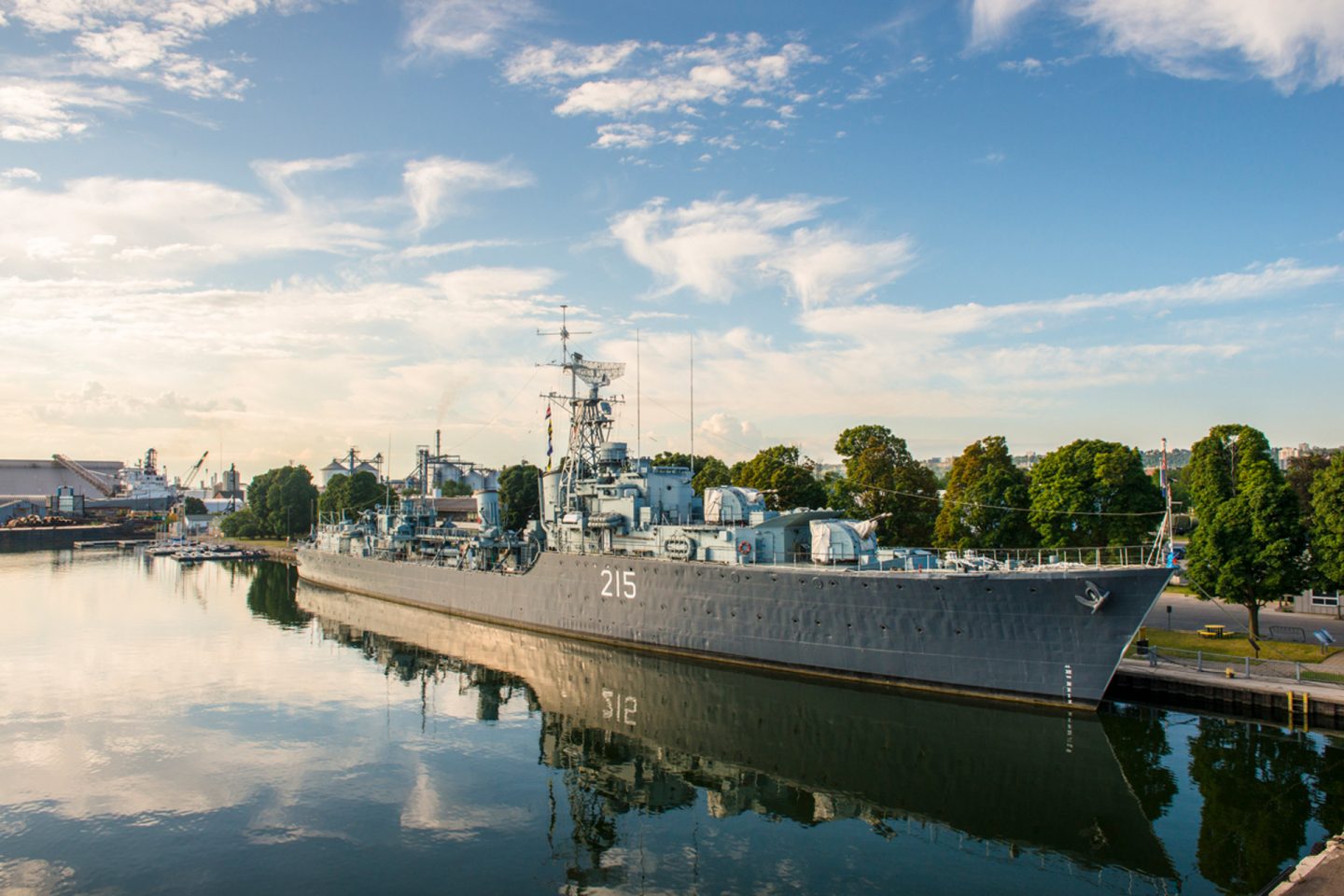 In the early 1930’s French, German, Italian, and Japanese Navy’s were upgrading their destroyers. England designed and built new destroyer’s specifically to counter the best destroyers at the time, the Japanese destroyers. Haida was built in a group of 27 other destroyers known as the Tribal class. These ships were all named after different groups of people and native tribes from all around the world. The HMCS Haida is named after the Haida Nation, who is originally located in Northwest Canada on an island South of Alaska. After completion of the first 16 destroyers Canada and Australia requested some of these for their Navy’s, since they both still had ties to the Royal Navy of England. The Tribal destroyers were fast and had majority of its firepower from its guns instead of torpedoes. Typically, destroyers had more torpedoes than the Tribal’s four, making it conversional and having a large amount of firepower on a destroyer for the time. The Tribal’s made for the Royal Canadian Navy were also outfitted with thicker hulls to combat icy Canadian waters. Of the 27 Tribal class destroyers 13 were sunk in war and another 13 were scrapped after the war(s) were over. Haida is now the only Tribal class destroyer left in existence.

Early in Haida’s career the ship assisted in defending convoys delivering supplies to Russia. German U-boats and Luftwaffe often attacked these convoys to disrupt supply lines. The Haida, along with other Canadian Tribal’s were perfect for defending these convoys as they navigated in the Arctic Circle, and their hulls were already thickened for Canadian waters. Crew members also had to manually knock ice of the sides the ship to prevent it from sinking. It was during one of these missions that   a German cruiser attacked the convoy. The Haida successfully killed the enemy ship and earned her first victory.

Haida and other Tribal destroyers were later moved from the Arctic Circle to the English Channel. This reposition was critical in the war as they rid the area of German ships to prepare for the allied attack on Normandy. One of Haida most famous accomplishments occurred in this channel in April of 1944. Haida sank a German destroyer and a few days later two more German destroyers approached. Along with Athabaskan, another Tribal destroyer, they engaged the enemy destroyers but the Athabaskan was hit by a German torpedo. After destroying one German destroyer and having one get away, Haida turned around to aid the Athabaskan and rescue as many sailors as possible. Haida initially rescued 47 sailors and returned to England. She also dropped all her life boats into the water for other Athabaskan sailors who could not be rescued by the ship. 11 more sailors sailed back across the English Channel to England a few days later. While on this journey they were being chased by a German ship, who luckily had to retreat because it came too close the England’s shore.

“The fightingest ship in the Royal Canadian Navy” is no name to be thrown around lightly. Haida had kills of all types in different conflicts, accounting to a total on 14 enemy ships sunk. This feat is impressive enough alone to be the most of any ship in the Royal Canadian Navy and included kills on 3 German destroyers and a German U-boat. To add to the glory of Haida, the fact the she destroyed a U-boat is again an impressive feat on its own. This is because of the Tribal classes design of being outfitted with more guns than torpedoes, making their submarine attacks less frequent. The record for Haida continues with another amazing individual feat with being a member of the “Trainbusters Club”. These kills took place during Haida’s time serving in Korea in which its task was to destroy supplies to North Korea, which happened to be located on a train. The name of the club originates from the United States Navy however as, “an effort to boost morale, [they] issued a challenge to all ships by forming an elite group called the ‘Trainbusters Club’. [In which] membership in the club was open to all ships.” It was at this point that Haida did what it does best and fired its large asset of guns to destroy its credited two and half trains, ranking it second in the Trainbusters Club. The Canadian Navy’s trophy for gunnery expertise is named after Haida for its prestigious accomplishments throughout its tenure in the Canadian Navy.

Commissioned in 1943, Haida had accumulated many kills and earned quite the reputation for herself and the relatively new Royal Canadian Navy. Like all good stories though this one must all come to an end. As the Haida slowly started to continue deteriorating from corrosion and leaks she was sent on a farewell tour around the Great Lakes in 1963 before being sent to be scrapped. Fortunately, a group of men met on this tour and devised a plan to save the Haida, lead in large part by the late Neil Bruce, and let her legacy live on for years to come. These five men from vastly different backgrounds including a lawyer and a pilot, created Haida Inc. to pursue the purchase of the HMCS Haida before scrapping.  Haida Inc. eventually purchased the destroyer for $20,000 CAD, payed over ten years interest free. The 1964 sale price of $20,000 CAD is equivalent to over $160,000 CAD in 2019, a large sum of money that is hard to come by, by both present and past value terms and would later cause problems for the group of men. The purchase of the former WWII and Korean War destroyer was not easy, as one may imagine. Neil Bruce traveled constantly to Ottawa and Halifax to talk to government officials and the Royal Canadian Navy to make the purchase possible. Convincing the defense minister as well as the Chief of Naval Staff that preserving Haida is a good and feasible idea. Also gaining support from Vice Admiral DeWolf, who served on the Haida, helped sway the odds in favor of Haida Inc.

Immediately after acquiring the Haida new challenges arose in the delivery of the destroyer. The men foolishly did not account for fees needed to deliver the ship to from Quebec to Toronto, Ontario. With none of the men being wealthy enough to pay the $6,500 CAD towing fee, and still needing to pay the $20,000 CAD sale price over the next decade, the men mortgaged their homes to have a collateral for the $20,000 incase anything went wrong. The towing company also later donated $1,000 CAD back to Haida Inc., after towing her to her destination due to the emotions behind the men’s goal to save the ship. After the ship reached its destination in Toronto a ceremony commenced, officially giving the HMCS Haida to Haida Inc. from the Canadian government. Former crew members aboard the Haida were in attendance for the ceremony including Rear Admiral Welland and retired Vice Admiral DeWolf., as well as other notable people such as the Defense Minister Hellyer and former Toronto mayor Givens. Haida was honored in this ceremony by Admiral Welland being presented the White and Blue Ensign, making it the first decommissioned ship to be able to fly both at the same time. The different ensigns were flown by ships owned by the Royal Navy (commissioned or not) and those employed by public service offices, respectively.

The honeymoon phase of the project concluded, and work began immediately to fix and restore the Haida to her past form so she could welcome the public into a museum show casing what it was like to live, operate, and fight in a WWII destroyer. They also had the intention of honoring those who gave their lives in service. Once opened admittance the Haida was only a small fee to help offset the costs of fixing the Haida and running the museum. However, with continued decay of the ship and consistent expensive costs to operate the ship and museum the Haida was eventually sold shortly after her initial purchase in 1964. In 1970 the Ontario government took over control of the Haida, although reluctant to do so because of the costs that would need to be thrown into it to complete repairs, and soon after named in a historical site in 1971. With costs again proving a difficult task the Ontario government wanted to scrap the ship, so the federal government stepped in with Parks Canada. “The chair of Ontario Place wanted to get rid of the Haida so I had dinner with him and took possession on behalf of Parks Canada for one dollar. Parks Canada assumed responsibility for the refit and the decision to move to Hamilton”, said Sheila Copps a Liberal Minister of Canadian Heritage in 2000.

With Parks Canada now in control of the Haida, in 2002 the Haida received $5 million dollars in funding to repair Haida again. A $10 million marine museum on Hamilton’s harbor was also announced at the same time as the Haida’s new funding. The Haida was repaired, moved from Toronto to Hamilton, and reopened for the public by 2004. There after the aging destroyer need yet more repairs in 2014, after only a decade of being posted in Hamilton. This project included repairs to the decaying ship and installation of new safety systems. Parts of the hull decay 25% or more, replacing stone ballasts with metal to combat moisture and improve balance, repairing bulk heads to remain a watertight seal, and new alarms and pumps incase of a leak that would respond automatically were some of the work done to the ship.

Currently the HMCS Haida, now 78 years old (2019-1941) and after serving 20 years (1963-1943) in the Royal Canadian Navy, resides peacefully where it has since 2004 in the harbor of Hamilton, Ontario. Having earned the title of “the fightingest ship in the Royal Canadian Navy”, having a gunnery expertise trophy (Haida Trophy for Gunnery Expertise) named after her, and being a member of the elite “Trainbusters” club, Haida has created quite a prestigious resume during her 20 years of service. Also, in this resume is that Haida and her crew members are all “Honorary Texans” after rescuing a B-29 bomber pilot who was from Texas. Certificates were presented to them thanking them for saving the pilot and declaring them honorary Texans which, “entitles them to wear cowboy boots, a ten-galloon hat and to generally conduct themselves as Texans. No bronc riding test is necessary at this time in order to conserve horsepower”. The preservation of the Haida is due thanks to the men of Haida Inc. and in large part to Neil Bruce after the Canadian government was ready to scrap her after service. The history of the ship and life on it during WWII and Korean wars can be seen as a memory to all service men and women in Canada’s military. Without countless hours from Haida Inc., millions spent by the Canadian government, and thousands of annual volunteer hours the HMCS Haida and its amazing history would not be here today to marvel.