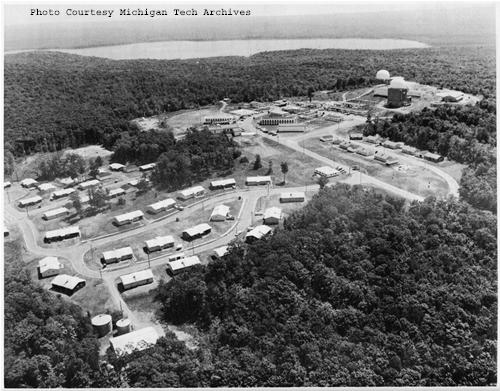 A hidden gem in the Keweenaw Peninsula of Michigan, Mount Horace Greeley has played host for decades of history through the Cold War and Communist Scare eras. The location became home to a radar station in the 1950s to combat breaches in airspace along the northern US border. Due to its remote location, the base suffered against many challenges, especially due to climate. Today, the site faces many obstacles on its path to restoration.

Shortly after the start of the Korean War in the early 1950s, the Soviet Union successfully completed its own production of an atomic bomb. With the looming threat of nuclear war, the United States began the massive installation of radar stations to protect its perimeter. One of the highest threats came from the north, as Soviet pilots had a straight shot to the northern US via arctic routes.

To defend against this, a radar station was built in the rural outreaches of the Keweenaw Peninsula as a part of the Semi-Automatic Ground Movement (SAGE). This station operated for almost four decades on Mount Horace Greeley before being shut down by the Air Force. The location was then used as a campus for the Keweenaw Academy, a reform school. The site was permanently abandoned in 2005, and has since become a hot topic for the Keweenaw area as a restoration project. Unfortunately, due to ignorant deficiencies in maintenance during its operation, as well as numerous counts of vandalism, there are many challenges in the way to restore the base for future use.

Life at the Base

Because of its remote location, upon the installation of the base, there was a need to create housing at or near the base. The layout of the radar station includes a radio site, an operations area, a cantonment area, and three different housing areas. Included in the housing and cantonment, the base offered about 45 family homes, dorms, a dining hall, a fitness center (with a bowling alley), a medic, and a youth center. The facility’s location created many problems with maintaining supplies, especially in the winter months. The enormous amounts of snow that accumulate around Mount Horace Greeley added to the struggles of transporting goods from local businesses, forcing the base rely on non perishables heavily.

Peg Gillis Briskey, a civilian working in the station’s commissary (grocery store), explains the location’s effect on general operations at the base,

“We depended on KI Sawyer AFB for non perishable items, and the local businesses for bread, milk etc. My grandmother lived in Houghton, and I was familiar with the Keweenaw when I started working there, but had never spent a winter. It was an eye opener, but I still love the area. I can remember the hill going up to the base too icy to climb, and sliding backwards to the access road. There was no air strip, to land a plane, but we did have a helicopter landing area” (2005).

Another individual, under the screen name of PsmitSC, recalls his time at the base while stationed there in the early 1950s,

“First winter we had over 254 inches of snow. I too recall the hill from the access road up to the base and getting our humongous snowblower stuck in the ditch one day. There was no housing for married personnel at that time so many of us lived in the Houghton area which made an interesting drive in the winter,” (2005).

The treacherous snow conditions, however, did not see an end to the base’s operation, as it continued to function for over thirty years into the 1980s

While the Keweenaw area is looking to restore the site, it faces many obstacles with health hazards and pollution. One issue that has been increasingly catching the eyes of restoration management is in regard to groundwater contamination.

“When they had the radar domes up here, they were cleaned with a solvent that in those days used to just drain off and into the ground. So it’s leached into the groundwater, and has contaminated what water there is here.”

Many see the location as a hidden gem of the Keweenaw, offering the best views in the peninsula. This spot would be ideal in the eyes of many for redevelopment for industry, tourism, or private housing. The issue at hand, however, is the lack of clean groundwater to meet codes for new development. Recently, there have been talks about the Air Force providing aid to help the contamination issue. Developers are hoping to get the process started soon to prevent the spread of contaminated water to lower lying wells in the area.

Another set of obstacles standing in the way are the structures, themselves. The buildings are dilapidated, vandalized, and covered head to toe with lead paint. In the recent few months, the amount of trespassing on the site has skyrocketed to a point where the Keweenaw County Sheriff’s Department is becoming increasingly alarmed for the well being of trespassers. Keweenaw County Sheriff Bill Luokkanen, expresses his concern during an interview with the Daily Mining Gazette,

“It has been unoccupied for many years, and there are many hazardous conditions that exist on the property, from dilapidated buildings to sinkholes, piles of broken glass, and age-weakened structures. I’m concerned with someone tripping into a pile of glass, or having a building collapse on them. That’s what I’m looking at.”

Until the site is restored and safe for visitors, the county is cracking down on trespassers to eliminate the threat of serious injury, as well as further damage and vandalism of the property.

In the eyes of many Keweenaw residents, visitors, and history aficionados, the hope is to restore the base to its fullest potential; however, with the lack of funding for a project of this immense scale, many have their goals set low. The target in mind for many right now is to clean up the site and protect the environment from more pollution, as well as prevent increased vandalism. There have been repeated talks and meetings regarding which direction to take the project, including the creation of a launch facility for low orbit satellites. This idea was birthed a couple months ago (September, 2019) from the wishful thinking for Michigan to return back to the space industry. The proposal uncovered many positive and negative unknowns for the county to consider. From an economic standpoint, the creation of such a facility would create up to a thousand jobs with a median salary in six figures. Conversely, with the estimated clean up costs and set up work, the State of Michigan will be forking over a hefty sum to kickstart the project.