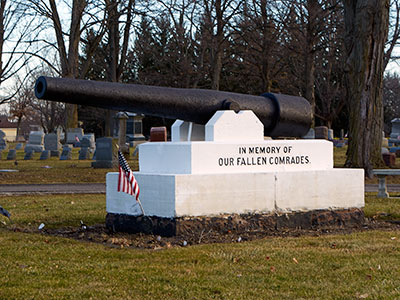 The 26th Michigan Infantry was not only involved in two of the most crucial battles of the Civil War, but received a front row seat to the final moments of the Civil War when General Grant and General Lee met at Appomattox Court House.  The 26th Michigan Volunteer Infantry fought in two pivotal battles of the Civil War: Wilderness and Petersburg. With those and many other conflicts in their history, they are perhaps best known for being the closest unit when General Lee surrendered at Appomattox Courthouse on April 9, 1865.  The 26th holds a special place in the hearts of the locals in the small town of Fowlerville Michigan as 41 residents served in the 26th, more than in any other regiment.

The Michigan 26th Volunteer Infantry was used as skirmishers during the Civil War for the Second Corps(7).  Skirmishers main purpose was to disrupt the advancement of enemy troops and to spread out and locate enemy lines.  It is with the Second Corps that these skirmishers were able to be at the front line when Lee surrendered at Appomattox Court House in 1865.  The 26th was created on the 12th of December in 1862. It was then that they left Jackson, Michigan on track for Washington DC. As the 26th left Washington DC, they were at their peak size of 903 men.

Under the command of General Erasmus Keyes, the Michigan 26th Volunteer Infantry partook in one of their first “skirmishes” as they were assigned to New York to calm down the Draft Riots that were wreaking havoc on the city.  These riots were caused when President Abraham Lincoln was made aware that the Union was running low on men. In an attempt to raise the number of Union troops he signed a bill requiring that all men who were American citizens between the ages of 20 and 35 and those who were unmarried between 35 and 45 were mandated to register for a draft lottery.  The reason this bill sparked such an uproar is that someone who did not want to go to war could simply pay the government $300 and they would be exempt from joining the Union Army. This caused the poor and lower working class people to become enraged, causing them to revolt and riot, thus nearly destroying New York city. In October 1863, the 26th was stationed at Fort Richmond which is located on Staten Island (4).

This low morale that was seen in New York was also apparent for the troops who were had set up camp near Alexandria Virginia during the winter of 1863.  Conditions were brutal that winter and many of the soldiers were unhappy with the current affairs of things. According to a letter sent home from 26th Michigan Infantry soldier Henry Arnold, there was preferential treatment on lodgings during that winter.  In the letter he sent home in February 1863, he shares that he and his fellow troops are sleeping on the ground in tents, while the African American troops were quartered in houses. In his strong worded letter he is expressing his frustration at not only the Union Army but also towards President Abraham Lincoln (1).  His letter is a first hand story, telling of how the morale was low during the winter of 1863 for the 26th Michigan Volunteer Infantry. Things would improve for the men the following spring, as they would be forced to engage in more brutal combat than they had previously seen.

After the 26th Michigan Infantry the winter of 1863, the 26th Michigan Infantry they advanced towards the Confederate lines with the Second Corps.  The next major battle fought by the Michigan 26th Volunteer Infantry was the battle of Spotsylvania Court House. The battle of Spotsylvania Court House began May 8, 1864 and was fought until May 21, 1864.  Although there was not a clear cut winner during the Battle of Spotsylvania Court House, both sides suffered heavy casualties. The Michigan 26th was not different in this regard as they had 27 men killed, 98 men who were wounded, and 14 men that were missing in action (4).  The violence in this battle was written about in the diary of Benjamin Brock, a soldier in the 26th Michigan Infantry. It was during this battle, on May 12th 1864 he received a gunshot wound to his hand, nearly costing him said hand. In his diary he also mentions that he considered himself lucky as his comrade James was shot dead beside him (2).  Benjamin Brock was one of many Union soldiers to be wounded or killed in this bloodbath of a battle.

After the 26th partook in the Battle of Spotsylvania Court House, they soon saw themselves face to face with nearly a year long siege.  The 26th Michigan Volunteer Infantry took part in the decisive siege of Petersburg, Virginia. The siege of Petersburg was perhaps the biggest blow the Confederates would endure before the war ended.  Petersburg housed a critical supply line that went to the capitol of the Confederacy, Richmond, Virginia. By time the Confederate city fell, almost a year had passed and many bloody attacks had been made. Perhaps the most popular of these attacks was the battle of the crater, in which explosives were planted by the Union under Confederate fortifications.  This bloody battle was a foreshadowing of the trench warfare that would be seen in World War I, several years later. It was from the victory at the battle of Petersburg that the 26th Michigan Volunteer Infantry moved onto the final stage of the Civil War, Appomattox Courthouse Virginia.

It was at the Battle of Appomattox Courthouse that the Union troops had defeated General Robert E. Lee and the Confederates for the final time as the war was finally won there on April 9th, 1865.  The 26th Michigan Infantry was lucky enough to get a front row seat to the signing of the treaty that would end the Civil War. According to the memoir of Webster K. Cole, a soldier in the 26th, he not only saw General Lee and General Grant ride up to the Mclean house, the location in which the treaty was signed, but also was part of the unit (26th) that was in charge of the final tasks that were completed in the month following the end of the Civil War.  In his first hand experience with the 26th at Appomattox Courthouse he says:

GRANT AND LEE and their body guards came in then. Lee and his bunch of about 40 lined up on one side of the road, our band of 36 musicians on the other, and 10,000 Yanks passed in review while the band played “Hail to the Chief.” Then Grant and Lee rode away side by side and their staffs followed them in order. The 26th Michigan, as a mark of honor, was left to care for the rebs. We had five days’ rations in our haversacks and three days’ in the wagons. The supply train unloaded the three days’ rations to Lee’s quartermasters, loaded their empty arms into the emptied wagons and left. We stayed two days until they got their paroles signed and left for where God only knows, not for home for they had no homes. While on picket one night I counted 16 homes burning at one time, the cavalry boys doing the burning. They said “The rebs are doing the same thing down in my home in Ohio.” The last of the 26,000 left about three o’clock in the afternoon and we started for Washington Junction, 35 miles away. We made it the next day at dark, tired and hungry. (6)

As Cole says, although the war was over, the 26th was unable to just jump on a train and go home, they had to stay an extra month and help Appomattox settle into post-war life.

Finally on June 4, 1865, the 26th Michigan Volunteer Infantry would be mustered out and those brave men who served would finally get to resume their normal lives, or at least those who made it back home alive had that luxury.  Of the total 998 men to serve in the 26th, 62 were killed in battle, 39 died later of wounds sustained, and another 158 men died of diseases contracted during the war. These numbers mean that the 26th Michigan Infantry had a casualty rate of 25.9%(4).  These casualties were not spread evenly over their time as a unit, as the 26th did not see many battles their first couple years of the war. They were not engaged in many skirmishes until the beginning of 1864. In the reminiscences of 26th soldier Newton Thorne Kirk, the war may have sounded as if it were a “summer picnic”, but he tells that this feeling of ease was soon to be nonexistent as of May of 1964, and this sense of constant war would not end until April 1865 when the war ended(3).  The fighting these brave men had to do between the Battle of Spotsylvania until the end of the war was nothing short of impressive, as they had to endure brutal battles. The 26th Michigan Volunteer Infantry is known throughout the small town of Fowlerville, Michigan as they sent many men into that unit. The statue located at the front of the cemetery in which many of those men are buried, serves as a reminder that we should remember the sacrifice, and the service that these men gave our nation.