Sonar has been an integral part of war since WWI, used to detect enemy mines and submarines. However in WWI the technology was still new and we relied on passive sonar to find submarines. Sonobuoys started to be important around the time of WWII and become exceedingly more important during the later parts of the cold war. The Sparton sonobuoy has become a vital part of the military and military history.

Throughout the history of war the technology has always been one of the leading factors in a successful military. Submarines appeared prominently beginning in WWI and along with it, the technology to find submarines. In the early years WWI sonar technology was invented to help with the location of enemy submarines. The Germans at the time had created a submarine call the U-boat or undersea boat. In the beginning of WWI the Germans had a total number of approximately 29 U-boats. Initially the target of these submarines were British commercial boats. However it wasn’t until WWII that the real need for sonar for the United States appeared. During WWII German U-boats wreaked havoc on Allied ships in the Atlantic. The German U-boats again targeted U.S. and Allied merchant ships, which caused the Allies to work on improving their sonar systems.

The combination of radio communication and improved sonar technology allowed for the sonobuoy to be invented. The sonobuoy, while very complex, is simply a battery, sonar transducer, antenna, and radio transmitter all combined into one self-contained mechanism. The sonobuoy works by listening for noises underwater caused by submarines. These noises can include things like vibrations from any of the machinery, the sound caused by the flow over the hull of the submarine, or cavitation on the propeller of the submarine. There are an assortment of sonobuoys ranging in different sizes and types. Sparton Electronics Corporation from Jackson, Michigan, was one of the leaders in sonobuoy technology working alongside other companies contracted by the military such as RCA. Today, although no longer based in Michigan, Sparton is still one of the largest sonobuoy producers.

Sparton Corporation was found in 1916 as Sparks-Withington Company. Sparton was a leader in battery powered radios and other electronics during World War I. In 1926 they produced the country’s first all-electric radio. Throughout the 1930s and 1940s Sparton work largely on their radio production. In 1940 they acquired military contracts and switched to production of many different military products such as bomb hoists, communications, and sonobuoys. In 1948 Sparton broadened their production to include black and white TVs. Throughout the 1950s the large majority of profit for Sparton was through sales of TVs and radios but then in the 60s and 70s, due to military threats from other countries, they switched primarily to military electronics. Once the fall of the Soviet Union happened just like all companies working on American defense, the funding was cut and Sparton had to switch back to primarily the commercial marketplace. However Sparton is still a leader in sonobuoy technology and still works with the military to improve designs and efficiency.

Sparton was responsible for producing both active and passive sonobouoys. Passive sonobuoys are used purely for listening for sound waves and were the first type created for detecting submarines. Originally, sonobuoys were dropped from ships in the ocean in a triangular pattern. This allowed for the passive sonobuoys to locate submarines in a known area. This was useful to begin with but risky because it meant that ships would still have to venture into areas where enemy submarines were known to be in order to place the sonobuoys. It also meant that you had to have a good guess as to the area that the submarine was in. Later designs allowed for the sonobuoys to be dropped out of air planes. This removed the risk of having a ship venture into water with known submarines in without accurate information as to where they were. They also started dropping color coded buoys in an X patter which allowed for even greater precision in locating the submarines. There were two main types of passive sonobuoys. The first was the omnidirectional broadband sonobuoy and the second is the directional narrowband sonobuoys. The first of the passive sonobuoys transmitted the signal via aural communication. The frequency at which it operated on was within the range of human hearing so the operator would listen to the beeps from the sonobuoy and decipher what it was picking up. The buoy would listen to noise being transmitted through the water and could generally pick up on the cavitation on the propellers of the submarines. When deployed from an airplane by parachute, the parachute would pull a switch to turn the sonobuoy on and the antenna protruded through a hole in the parachute. The sonobuoy was powered by 1.5 volt flashlight cells and two miniature batteries. It could operate continuously for up to 4 hours. Extra batteries could be attached to the side of the sonobuoy. This would be done for certain ones that they wanted to use for a prolonged amount of time. The first successful sonobuoy used in WWII was launched on 25 July 1942. The reliability of most sonobuoys that were properly kept and maintained was around seventy percent. A directional sonobuoy design began in 1942. It had a directional rotation hydrophone that would turn between 3 to 5 times a minute. The turning was accomplished through the use of a gravity motor (A motor that runs off of inertial energy using a small amount of power to keep momentum). However since the design took so long and testing did not take place until 1945, it did not play a role in WWII and the design was dropped.

After the end of WWII research and development of the sonobuoys was halted. Like all previous post-war eras the reasoning behind it was that they would not be needed in after the war, so the technology did not need to continue to be developed. It wasn’t until the 1950s that the Naval Air Development Center (NADC) took over the projects of the sonobuoys and reopened the development of sonobuoys. The buildup of the Soviet submarine fleet causing the renewing of the navy’s interest in anti-submarine warfare (ASW). The directional sonobuoy design that was scraped in WWII was restarted. The plan was that the navy would use the directional and the omnidirectional buoys together. The omnidirectional buoy would be used for the initial detection of the submarines and then the directional buoy would be used to hone in on the actual location. The new omnidirectional sonobuoys had reliability problems that stemmed from the need for someone to disassemble the buoy to replace the batteries. That person then had to reassemble the buoy and readjust it before use. In 1956 another breakthrough in sonobuoy technology came out. This involved the use of two omnidirectional sonobuoys that would be dropped with a known spacing between them. Then a time delay from the signals of the buoys would be introduced allowing for the two buoys to work together and provide an accurate location of a submarine. It was an ingenious idea except that it took so long to get the sonobuoys in place that the submarine was generally surfaced again, meaning that the submarine would go quiet to the sonobuoys. In 1955 active sonobuoys where invented. An active sonobuoy sends out a signal and waits for a response. It reads a signal from the sound wave bouncing back much like how a bat sees. This allowed for the military to drop single sonobuoys all around the ocean, and have a much broader area to search for submarines. With the new active sonobuoys they gave a code name to each type, with the passive buoy being called Jezebel and the active being called Julie.

In 1957 the Soviet Union started producing their first nuclear powered submarines. While these submarines were very high tech they had a down side. The implemented two fast turning propellers which caused high levels of cavitation on the props and produced a lot of acoustic noise.  The noise that they generated also was very distinct allowing for the sonobuoys to easily pick up the sounds. They could also easily tell the difference between the submarine and other sounds coming from the ocean. Some of the problems that came along with the active sonobuoy were that it was much heavier and had a shape to it that was problematic. It also tended to have detection problems due to sending the signal out and receiving.

In 1962 due to large threats of Soviet patrols a new aircraft created to meets these threats was introduced the P-3 Orion. The P-3 was about to carry a total of 84 sonobuoys and monitor all of them from stations within the aircraft. These were a large help in making it through the crisis stage of the Cold War. In 1965 the sonobuoy was again improved and a new model replaced older ones. The new model was another passive omnidirectional buoy and replaced both the Jezebel and Julie sonobuoys to become the primary one. The upgrades to this buoy allowed for it to be placed from 60 to 300 feet of depth. It also had better filters to filter out static noise and reverberations. The competition for submarine and antisubmarine warfare was very fierce between the Soviets and the U.S. Even though the Soviets had their nuclear submarines they were very noisy and because of this the U.S had a great advantage in submarine warfare. 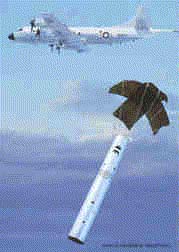 While the passive sonobuoy was invented in WWII the sonobuoy became the primary ASW tool in the cold war. The sonobuoys in the Cold War were mainly passive omnidirectional sonobuoys. The main reason for the use was in response to the Soviet submarine program that was growing increasingly complex.

Sonobuoys have been an integral part of the military starting in WWII and continuing on even to today’s wars. Without the help of Sparton and companies like them, the military would not have the technology need to located and prevent attacks from enemy submarines. The engineers at Sparton and Sparton itself helped to create a technology that has been vital and still is vital to our military.