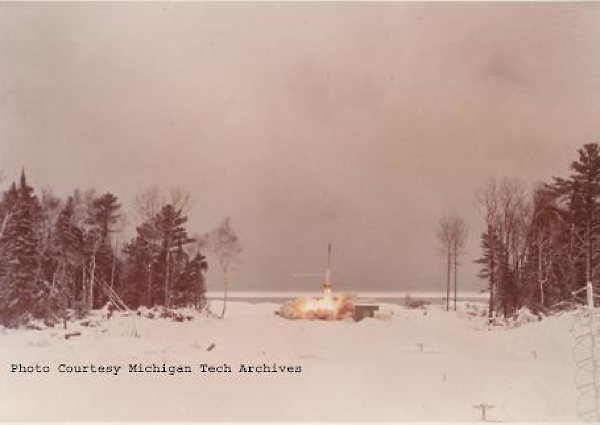 The Keweenaw Rocket Range is a launch pad located at the very tip of Michigan’s Keweenaw Peninsula. The project was led by Dr. Harold Allen along with the University of Michigan and NASA. The site was used between 1964 and 1971 to launch rockets that were used for meteorological data collection. [4]

The rocket range was operated by three professors from the University of Michigan along with a minimum of two employees from the USAF’s White Sands Missile Range in New Mexico. Early on, smaller rockets called Mighty Mouse rockets were launched from floating buoys between the launch pad and Manitou Island, a near 2.5 miles off shore. There were about 50 Mighty Mouse rockets launched this way. [7]

The Daily Mining Gazette captured a picture of the second rocket to be launched from this site. On December 8, 1965 they wrote that

With lightning speed, the second of the University of Michigan rocket firings is shown within a fraction of a second timing. The projectile is shown proceeding in a northeasterly direction between Manitou Island and Keweenaw County’s first westerly habitation, Copper Harbor. No person approached the site closer than 50 feet. The camera here is behind one of the snowmobiles used to carry the firing party to the site. Lake Superior was calm with only a gentle lapping of the waves against the shoreline of rocks, pebbles and stray driftwood. Dr. Harold Allen, party director, said this rocket would go up 22,000 feet and move horizontally about 9,000 feet. [1]

The first Arcas rocket was launched at on August 6, 1964 at 7:07 am. On this Wednesday morning a 6 foot long 76 pound rocket was launched to an altitude of 41 miles. The flight lasted 5 minutes and the rocket parachuted down into Lake Superior 20 miles from the original launch site. The rocket carried a payload of meteorological instruments which collected data to be sent back to the main lab headquarters. The instruments measured temperature, air pressure, density, and wind velocity. The team never bothered to collect any of the payloads except for once. One rocket was found in a tree where they ended up cutting the entire tree down rather than sending someone up that high to retrieve it. The rocket was in such good of condition that it could be refueled and fired again. Another rocket washed ashore of Lake Superior down by the city of Marquette. [6]

The Keweenaw Rocket Range was also used to test a project called WEBOC. WEBOC had a goal of setting up a system of buoys with rocket launchers in order to launch smaller Mighty Mouse rockets to be used for weather data. These small rockets would contain a payload of various weather reading instruments. Each launcher was to be enclosed to keep the rockets protected from the elements. The case developers tested closed-breech launchers at the Keweenaw Rocket Range to see if this idea could be used elsewhere. [2]

The Keweenaw Rocket Range only operated during the winter months. This is not what most would expect since the average temperature for the area can range from –50˚ to +20˚ F between the months of October and May. The range was operated during the winter to ensure that the areas surrounding the launch site were clear due to the fact that logging shipping was closed for the season. [4]

The Rocket Range was not only a great place to launch rockets, but it is also a very beautiful spot to take in the scenic views. On November 22, 1965 The Mining Gazette captured an interview with Malcomb Ross. The caption reads that “it appears here that the lure of Keweenaw Point is persistent. President Malcomb Ross of Space/Defense Corporation indicated that Keweenaw Point is one of the most intriguing areas he has ever visited. Incidentally, he holds the nation’s balloon flight altitude record and has made flights in the Dakotas. Here, he is interested in weather balloon observation.” Having personally gone to the tip of the Keweenaw, it is safe to say that it is one of the most interesting places to visit. There is a wide range of scenic views that would interest audiences of many types. For those who like shoreline scenes, there is endless Lake Superior. For those who like dense forest, there is plenty of that if you just turn your back to the lake. There is even a forest fire area right along Lake Superior on the Keystone Bay. An area of about 7 acres burned in July of 2006. This wildfire was started by lightning. [1]

The Daily Mining Gazette had another comment on the beauty of the location for the Keweenaw Rocket Range. On November 22, 1965 they said that the

Keweenaw Point truly is a most attractive scenic region. Its position in Lake Superior gives rocketry just the factor it needs for comparative isolation yet with a decided nearness to avenues of approach. Here, Lake Superior is seen lashing at inroads it has made in the dark conglomerate of the Keweenaw shoreline. [1]

Today, the range sits as an abandoned site along the shore of Michigan’s Lake Superior. Shortly after the last launch in 1971 the site was packed up and taken away. This included everything from the heated buildings to the launch pad gantry. The only thing that remains is a concrete slab that is the actual launch pad that was built specifically for the Nike Apache rockets. On that slab is a monument to the Keweenaw Rocket Range and a curved piece of railroad rail that was used to rotate the rocket prior to launch. This was to ensure that the rocket landed in an uninhabited area. The tick marks with the dictated degrees can still be seen etched into the now rusted rail. [2] From the launch pad there is a great view of the Gull Rock lighthouse located on Manitou Island. This is a great place to take the family and have a picnic. What once was a relatively large operation for launching weather rockets now sits bare. Though that allows a pretty nice view of the beautiful Lake Superior. [3]