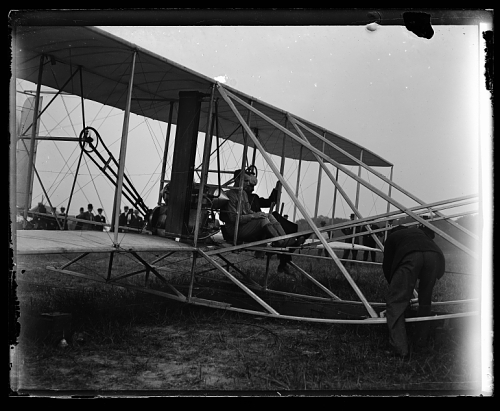 1916 marks the beginning of the establishment of what is now a National Guard air base in Harrison Township, Michigan named in honor of Lt. Thomas E. Selfridge. Selfridge was killed in a flight demonstration on September 17, 1908 with Orville Wright at Fort Myer, Virginia when the aircraft malfunctioned, forcing Wright to lose control and crash the aircraft into the ground. The death of Selfridge during this demonstration marked the first death of a person in a powered airplane.

Preparing for the Flight Demonstration

Selfridge was to leave for Saint Joseph, Missouri on September 19 to fly dirigible purchased by the Aeronautical Division of the U.S. Army for the Signal Corps. However, he was also scheduled to fly during one of the acceptance trials for an aircraft that the Army had planned to purchase from the Wright Brothers. Selfridge was eager to fly as soon as possible, because he did not have much time before his departure. This flight could not take place on September 16 or 17 due to high winds. On September 17, the day before the demonstration, Wright had installed new, longer propellers on the plane in order to increase its speed because he was nearly ready for the official trials. Finally, on September 18 around 5:00pm they were ready to take flight.

A little after 5:00pm, Selfridge and Wright had boarded the aircraft and it was obvious that Selfridge was enjoying himself. The New York Times had described his enthusiasm during the flight,

As the aeroplane dashed off the rising track Lieut. Selfridge waved his hand gayly to a group of army officers and newspaper men and threw back some laughing remarks that were drowned in the whir of the propellers. As he swept around Selfridge was evidently enjoying himself thoroughly. When the machine sailed above the heads of the crowd at the head of the field it could be seen plainly that he and Wright were holding an animated conversation. Selfridge interrupted this for a moment to wave to a greeting to his friends. (“Fatal Fall of Wright Airship” 1)

Sadly, Selfridge’s fun was very short lived. After approximately 4 minutes in the air, vibrations in the machine caused the right propeller to make contact with the upper guy wire. This caused a clicking sound heard by Wright, which worried him so that he tried to land the plane. He could not land the craft immediately, however, because there was a cemetery wall in his landing path. He had to complete his turn before he could try to land.  At first, the propeller struck the guy wire very lightly several times, but eventually it began to strike the with great force, which pulled the wire completely out of its socket and broke the propeller. The propeller fluttered down toward the ground and the aircraft took a nosedive as Wright immediately shut off the power. The aircraft fell from an altitude of about 75 feet before it crashed into the ground, landing on the front end of its skids and crushing the front rudder.

When the crowd saw the plane hit the ground, they stood there silently for a moment, then they rushed forward toward the aircraft. The chaos is again described by the New York Times:

From the largest crowd that has yet witnessed a flight, there arose a cry that was neither a scream or a groan. For a moment there was not a movement, and then people surged across the field. Col. Hatfield, in command at the army post, issued some quick, sharp orders and the cavalry guard dashed forward. The crowd was frenzied and the cavalrymen were compelled to use actual force in many instances in controlling it. To cries of ‘Stand back, there ,’ the press paid not the slightest attention. Many were friends of Wright or Selfridge, and these insisted upon crowding close.

‘If they wont stand back, ride them down,’ was the order issued. And the troopers obeyed to the letter. No one was seriously hurt in the crush of men and horses, but this was due to only a miracle. (“Fatal Fall of Wright Airship” 1)

The cavalry guard was ordered to keep the crowd at bay while officers at the Signal Corps rushed to the crash site. Wright and Selfridge were found in their seats, being supported by wire braces that crossed in front of the seats. Wright was conscious and able to speak, but he was dazed and badly injured. Selfridge was not conscious at all; he was lying face down, stretched out on the wires, with his head supported by one of them. The plane had to be lifted to extract the two men. Wright was extracted first then Selfridge soon after. Some physicians from the crowd were called upon to examine the two men while others called for surgeons and an ambulance. The physicians were unable to examine them, however, due to the excitement of the crowd. When the ambulance finally arrived, the two were lifted onto stretchers and transported to an operating room, during which Wright had lost consciousness.

Later it was found that Wright had fractured his left thigh and some ribs on his right side. He also suffered from severe shock, but he eventually did recover. Selfridge never did regain consciousness. He suffered a fracture at the base of his skull over his eye, which he obtained when his head struck something in front of him: either one of the wooden supports or one of the wires. He underwent neurosurgery, but it was unsuccessful. He was pronounced dead at 8:10pm, three hours after the crash. Selfridge was buried at Arlington National Cemetery on September 25 with full military honors.