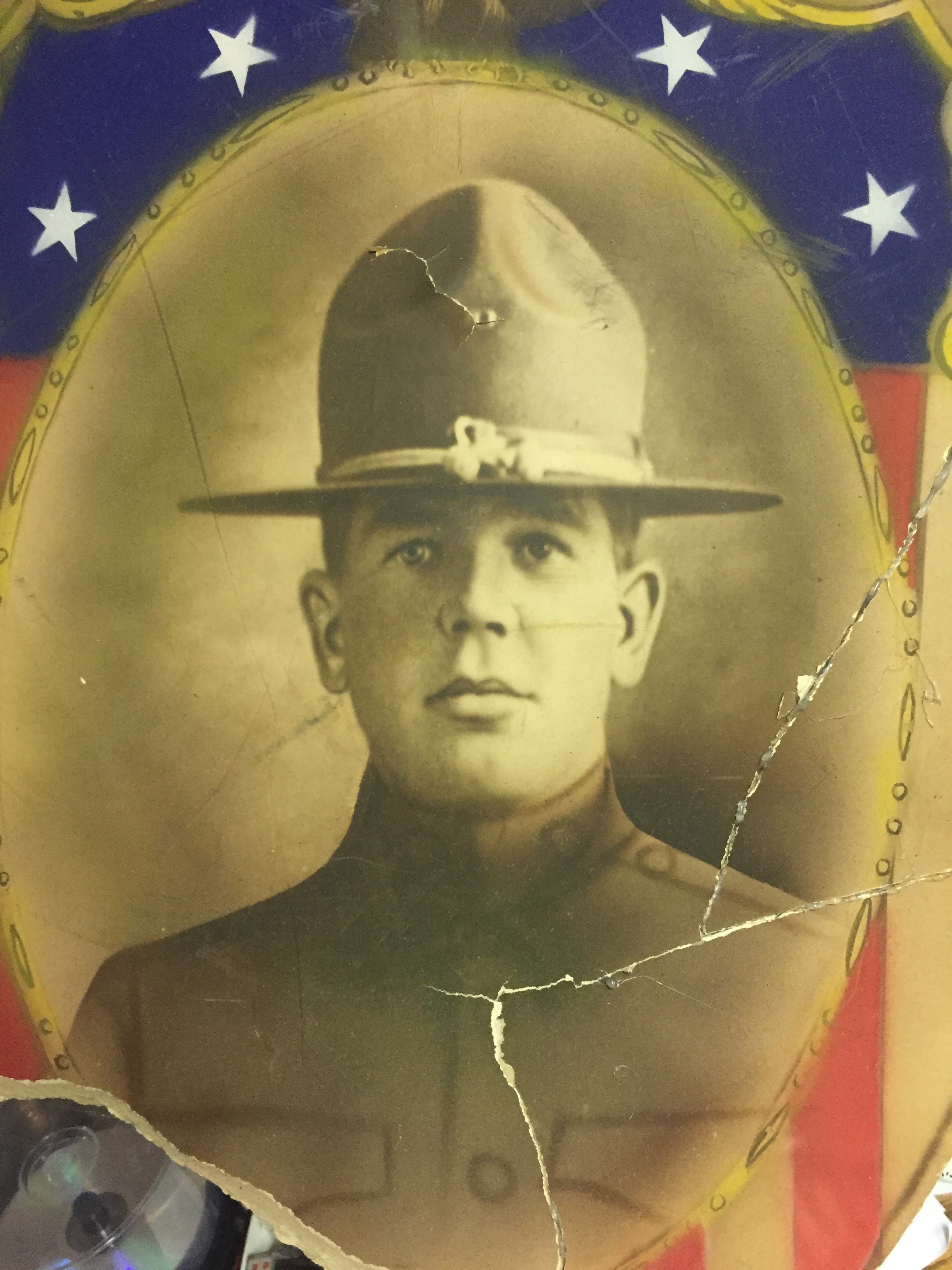 Camp Custer and World War I

Camp Custer, located near Battle Creek, MI, was a camp built during World War 1, in 1917. This camp was named after General George Armstrong Custer, the Civil War General most famous for his death at the Battle of Little Bighorn. During World War I, more than 100,000 soldiers in the U.S. Army trained there. Built in a little more than 5 months, this camp was one of the sixteen camps that the United States Army developed for the rapid training of soldiers during the War [7].

Many buildings were present on Camp Custer. The Y.M.C.A or Young Men’s Christian Association where men could come together for Bible study, the Knights of Columbus, a Catholic charity based organization, mess halls for food, hospitals, rifle ranges, and barracks. The buildings look identical in style, due to the need for quick development in order to get soldiers to Europe. These buildings had large green and tan buildings with a triangular roof. Almost all buildings are one or two stories [10].

Equipment of World War One

These soldiers were given many different pieces of equipment in order to be ready for war. Helmet, shirt, trousers, pants, trench boots and coat, field pack, shovel or entrenching tool, and arguably the most important, the gas mask. Chemical warfare was ever so prevalent during World War 1. Soldiers needed the gas masks in order to combat the gases and have a fighting chance at survival. Along with the chemical warfare, explosives and the shrapnel it produced forced helmets to be created to help protect against this expanding part of war.

The pieces of equipment are those of my Great Grandfather, Carl Harry Anderson. Born in October 5, 1893 in Sweden and died on June 30. 1965 in Ironwood, Michigan. He was a private in the United States Army during World War I and stationed at Camp Custer. He was part of the 337th Machine Gun Infantry Company which was under the 85th Division. On the collar of his uniform there are two buttons. On the right side of the collar, the letters “U S” to signify they are fighting for the United States. On the left side of the collar, the number “337” is written on the top of the button. At the bottom of the button, is “MG”. There are two rifles crossing each other in the middle. This signifies that he was part of the 337th Machine Gun Infantry Company. The two gold chevrons on the left sleeve signify that he was deployed overseas for a year. Although he did not talk about his experience to anyone, the pictures that I have obtained show him in France and his time at Camp Custer.

The gas mask shown above, is one of German origin. This gas mask was called the Ledershutzmasken and found on the mask. The amazing part is that he somehow acquired 5 of these gas masks. Inside of the canisters that hold these gas masks, were eye-glass replacements in case one would break. Written on the wrapping is “Klarsheiben vor Feuchtigkeit schützen, nicht wischen, nur am Rand anfassen, so einlegen:”(“Protect the discs from moisture, do not wipe, only touch the edges, insert”). Along with the German gas masks, was his US Army issued gas mask, otherwise known as the Corrected English Gas Mask. There were two positions of carry for this gas mask. Since it was in a bag with a sling, it would be draped on the side of the body when not in use. When in use, for “alert position”, this gas mask would be right on the chest. There is cord connected to the outside of the haversack, which allows the user to adjust the position of the haversack on the chest. This would allow the solider to quickly grab the gas mask from the chest, in case there was a gas attack. 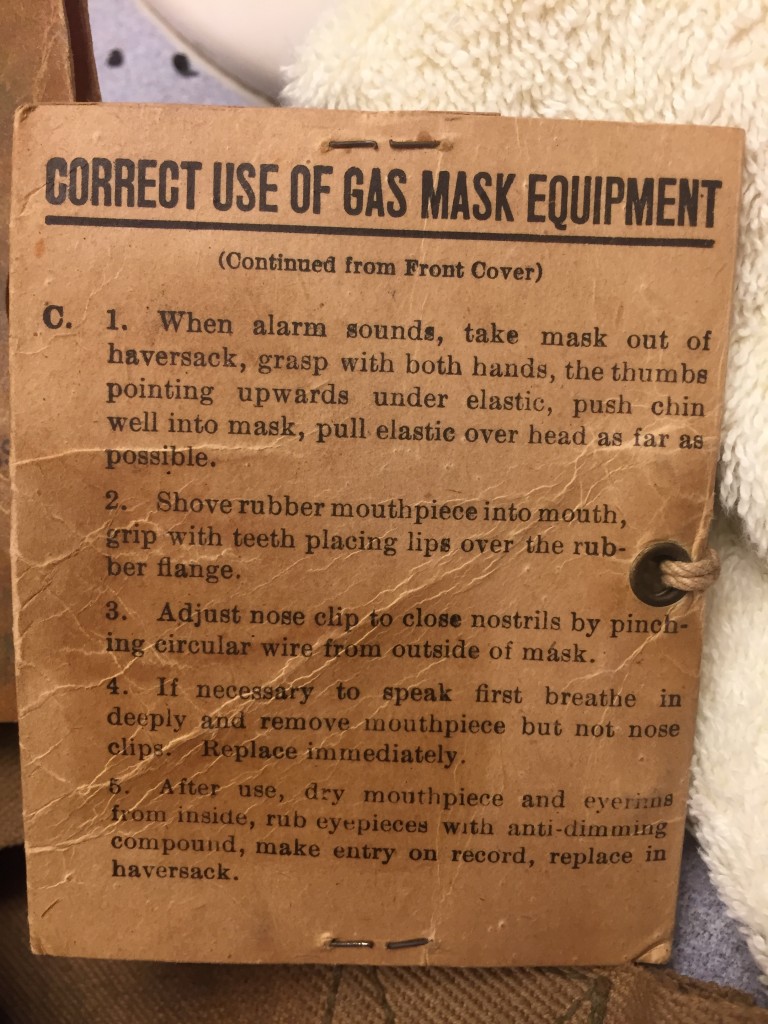 Connected to the haversack is a small envelope. This envelope has instructions on the outside of it, on how to wear the gas masks properly. Inside the left side of the envelope are sections of writing and a table. Date issued, date returned, Division, Regiment, Company, reason for return, gas analysis. The table at the bottom of the envelope is used as a chart to mark down how many hours the gas mask was worn during “drill with actual gas”, “cloud gas”, “shell gas”, “shell gas”. On the right side of the envelope are small plaster sheets. These are used for repairing tears in the hood of the gas mask.

The helmet is a metal shell with a leather inside that forms the inside of the head to keep from moving. These helmets were primarily used to protect against shrapnel from explosions.

The final piece of equipment are the two bayonets. The bayonet is essentially a large knife that connects to the front of end of the rifle. These blades are covered with a large, almost oval-shaped cover. The bayonet has a wooden and metal handle. At the rear end of the handle, there is a small rectangle that is cut out of the handle. This slides onto the rifle and locks in. The release mechanism is a small button close to the end of the handle. The steel blade comes to a sharp point, but the rest of the blade is rather dull. One side of the blade is sharp, the other side is squared off. This was used for close quarters combat, and to stab the opponent. When handling the bayonet, it is surprising how light it feels in the hands.

Experience with the Equipment

I decided to try on the equipment and get a feel for how comfortable, or uncomfortable everything was. Not just physically, but how mentally comfortable and uncomfortable these items could be. With this in mind these items are almost 100 years old. However, they are still in rather good shape. My Great Grandfather was also about 6′ 1″ tall compared to my 5′ 9″ height. The uniform is 100% wool. It was itchy but kept me warm when I stepped outside with it on. It did not move as smoothly as cotton does. Trying to do quick movements, such as crouching and jogging were pretty difficult in this uniform. There are also leg wraps that start just below the knee cap and wrap down to the ankle. These wraps look like modern-day athletic wrap. They were used to keep the feet and legs as dry as possible. The trench coat was about twice the thickness of the uniform jacket. This went down past my knees. It has four large buttons, and a large collar to help keep you warm. This trench coat did not move very well and is very large, but would keep you warm on a cold night. The helmet was rather loose on my head. Whenever I tried rapid or quick movements, it was very difficult to keep the helmet still. It also does not cover the entirety of the head. The helmet, during this time, only covered just above the eyebrows. With this in mind, I decided to put the gas masks on.

The German gas mask was rather difficult to get on quickly. I tried to go quickly when putting the gas masks on, to simulate a gas attack. The United States issued gas mask was quicker and easier to put on since it was right on my chest. The German gas mask was in a canister that needed to be opened, then unfolded. The German gas mask did not have adjustable straps, it had elastic straps. It surprised me how well-sealed these gas masks were, once on. Once I had the gas mask on, it makes you think of what the soldiers were thinking about when inside the mask during a gas attack. I thought about, what if the mask did not work? What if the filter was broken, or what if there was a spot that would break the seal? The other thing to consider is that when a gas attack comes, you need to take off your helmet in order to get the gas mask on properly. These couple of seconds with the helmet off must have been rather nerve-racking. The helmet is not very thick, but it gives you a false sense of security. The gas mask also inhibits your field of view quite a bit. It was hard to breathe in the mask but the seal was tight. I did not try running with the equipment on however, running with the gas mask would make it even more difficult to breathe. It also adds a weight to your head that you are not used to.

The bayonets were something I tested with. The point is still sharp. The thing that surprised me the most was the cover for the blade. It is rounded, ergonomic, which makes it very easy to grab and pull the blade out. I do not have a rifle that worked with this bayonet set up. What I did is attach it to a piece of wood that was roughly the same weight as a rifle. What I found is that, although the bayonet does not feel heavy on its own, it would make the rifle more front heavy.

It is hard to believe that equipment like this was used. However, these were some of the technologies that helped make the United States Soldier during World War One. All of the United States standard issue gear, was given to Carl H. Anderson at Camp Custer during World War One. Although there are no written diaries from my Great Grandfather, it is possible to put together the pieces he left into the story of the Great War. Putting all of the equipment on forced me to think how a soldier during World War I would feel. Although there was no threat of danger wearing this equipment, putting the gas mask on and being enveloped in a difficult viewing and breathing experience opened my eyes. The itchy wool uniform, the heavy and thick trench coat, the helmet, and the bayonets all have a story. It gives an appreciation for those who fought during this time.