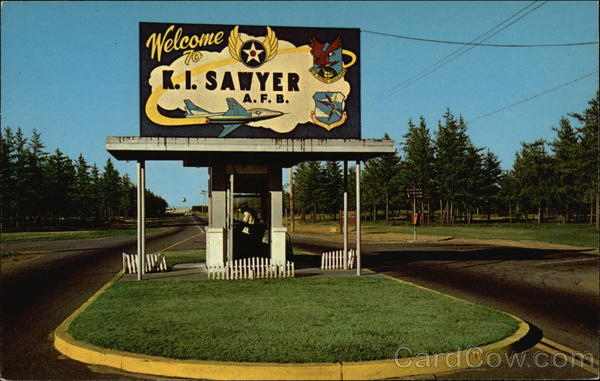 The Strategic Air Command served as a major part of the nuclear deterrent against the Soviet Union and as the striking force for the United States for almost five decades. With many different units and squadrons stationed around the globe, a few made their way to the Upper Peninsula and were stationed at the K.I Sawyer AFB near Marquette throughout its lifetime. Chosen for its remoteness and its wide open airspace, the base worked well for what the Strategic Air Command would have to do throughout its tenure there. The K.I. Sawyer AFB saw many different squadrons come through its runways with many even more airmen and their families stationed at the base.

After World War II the United States saw that it needed to drastically increase their defenses to face the new and extremely destructive power of  nuclear bombs. The Strategic Air Command and the Air Defense Command arose from America’s need to protect itself in the nuclear age that arose after World War II. Eventually, growing nuclear arsenals in the United States and the Soviet Union led the world into the Cold War. Originally designated the Continental Air Force it was soon redesignated to the Strategic Air Command (SAC) on March 21, 1946. SAC was used as a kind of symbol for the Air Force and as a type of deterrent toward the Soviet Union and their growing nuclear arsenal. If the Strategic Air Command was going to play a larger role in protecting the U.S., someone was going to need to increase its personnel numbers and budget through some new policy. This new policy would come to fruition during the Cold War.

As the Cold War progressed and an end to the Korean War in sight, President Eisenhower called for a new reliance on nuclear weapons and airpower as a deterrent to war with his “New Look” policy. New Look policy made the underlying deterrent threat more explicit. With this change in the national defense, the Air Force was tasked with expanding its capabilities. Soon SAC became the “preeminent instrument of the American defense strategy.”[8]. With the new budget, the Air Force was able to develop newer bombers that were far superior to the bombers of WWII. This all helped to fuel the arms race between the U.S. and U.S.S.R. which would push both countries to continue developing technologies so as to not be out classed by their enemy.

Originally opened as the K. I. Sawyer Airport on 8 April 1956, the base was soon redesignated the K. I. Sawyer Air Force Base from 8 May 1959 and remained an active military base until its closure on 30 September 1995. This base, chosen for its remoteness and strategic location,  became an important part of the protection of the Great Lakes and surrounding area. A major component of the of the original need for the base was for its defense capabilities with the Air Defense Command (ADC) and later on a post for the Strategic Air command (SAC) for large bombers. K.I. Sawyer was originally put under the jurisdiction of the ADC on 8 April 1956. The ADC was to act as a fighter-interceptor defense against an enemy bomber attack, mainly for the possibility of a soviet attack during the Cold War.

The Strategic Air Command became a tenant of K.I. Sawyer AFB on 1 August 1958 with the organization of the 4042d Strategic Wing. The 4042d Strategic Wing was a B-52H Stratofortress dispersal wing. An important part of SAC’s plan during the Cold War was to disperse its bombers over many different bases so that the Soviets could not destroy the entire fleet in a surprise attack.  One of SAC’s many tools was the B-52, which had a typical combat range of almost 9,000 miles with air refueling. This long-range aircraft could potentially make it from the K.I. Sawyer  AFB to Moscow and back while being refueled sometime during the trip, this was one of the many reasons that SAC was so successful in being used as a deterrent against other countries trying to attack America or potentially threaten it.

America has many bases stationed throughout the United States as well as in many overseas countries for the purpose of defense. During the Cold War, SAC bombers were deployed to more than 50 domestic and overseas locations. By 1960 SAC had one-third of its bombers, personnel, and aerial refueling aircraft on 24-hour alert. This made it so that the crews were able to go from being on the ground to being in the air within fifteen minutes of an alert. With 744 B-52 bombers, the B-52 had twelve different variants to account for. Many of these planes were on 24-alert for at least some of their tenure, the amount of time these aircraft and the people piloting them have spent in the sky protecting and destroying things for the Air Force is hard to imagine.[5]

On display at the K.I.AFB is a B-52D model, tail number 55-0062, that was stationed at K.I.AFB for 26 years. This particular aircraft flew many missions for the Strategic Air Command over North Vietnam during the Vietnam war for 19 months. Retired on September 15, 1983, The B-52D (55-0062) had its final landing into K.I. Sawyer after an almost 26-year period. Logging in at just under 15,000 flight hours this aircraft had seen almost two years worth of action. This shows just how much these aircraft were used and relied upon by the Air Force.

Throughout the Strategic Air Command’s existence, it has been at the forefront of technological weaponry and aircraft. One of the many aircraft used for almost the entirety of SAC’s life was the B-52 Stratofortress,  “The Strategic Air Command became the preeminent instrument of American defense strategy. Standing continuous alert for the rest of the Cold War, SAC’s arsenal of bombers, such as the long-range B-52 Stratofortress, was joined in the 1960s by intercontinental ballistic missiles, such as the Titan and Minuteman.”[8]. The B-52 played a role in almost every dispute since its introduction in 1955 despite the creation of more advanced aircraft. Even today the B-52 is still in flight.

SAC motto was clear and concise, “Peace Is Our Profession.” They were there to make sure that America and its allies would be safe from the Soviets and anyone in the future who managed to construct a working nuclear missile. Nuclear weapons during their early conception and still today are seen as less of a weapon and more of a deterrent towards other nations. If one nation were to try and nuke another country they would swiftly be dealt the brunt force of that nation’s nuclear armament. This is one of the reason there hasn’t been a need to deploy any of America’s nuclear weapons since World War II. This view towards nuclear weapons has made it so that SAC could focus on many different areas and still maintain relative peace.

A favorite among the SAC community for its location and it’s many outdoor activities, K.I.AFB was a popular place to be stationed for military personnel. Sometimes called the fourth-largest city in the Upper Peninsula, with 3,300 military personnel and 1,000 civilian employees, the K.I. Sawyer AFB’s military payroll accounted for $157 million annually. This was 20% of the economic output within a 50-mile radius[9]. The AFB was an invaluable resource for the surrounding area, its shutdown took away valuable jobs and moved many people away that would otherwise contribute to the local economy. The closure of this base was a sad day for the surrounding area because of the financial impact that it brought upon the Marquette area and its local businesses.

The Strategic Air Command had been an important part of the United States continued safety and defense from a nuclear strike. Until its retirement in 1992 SAC has sat watch for almost five decades with many units on 24-hour alert for most of their service. Along with keeping America home front safe from foreign threats the Strategic Air Command had numerous missions overseas in the Korean War, the Vietnam War, the Cold War, and Operation Desert Storm doing reconnaissance missions and aiding in the fighting anyway possible.  With the fall of the Soviet Union in 1991, the need for a large arsenal nuclear warheads for the use of deterrence slowly came to an end. After 45 years SAC was finally decommissioned and replaced by the United States Strategic Command after 45 years of service. USSTRATCOM was created to take on all of the previous responsibilities that SAC left behind along with some new responsibilities that would protect U.S. freedom of action in cyberspace and space.[5]