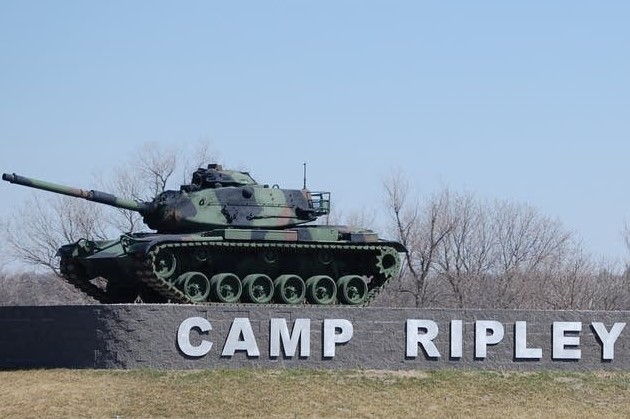 Camp Ripley located in Little Falls, Minnesota, currently services as a National Guard post and training location for the Minnesota State Patrol, National Guard, Minnesota Wing of the Civil Air Patrol, Minnesota DNR and many other programs. The forts original creation was intended to protect an important supply route and keep peace with the Native Americans in 1849. Ripley’s purposes today include small arms and tank range training, maneuver training capable of supporting heavy brigade, and special operations training. One of the most known programs taking place in this camp is the foreign exchange program. This program allows countries such as Canada, the Netherlands, Norway, and the United Kingdom to see and be trained in a variety of the United States military practices. The most recent enhancements to Camp Ripley have occurred as of the September 11th terrorist attacks. Due to this facility’s size they have implemented a twenty six building simulated village to support many different types of tactical trainings such as close quarter combat, urban warfare training and improvised explosive device trainings. They are also developing an unmanned aerial systems facility which will be working with drones and other realtered systems. As the camp was designated a state forest preserve and game refuge, they are committed to the stewardship of the environment by showcasing the ability of the military to partaking in ecofriendly efforts and the use of solar energy. Although there are many new improvements the camp has come along way in its tenure.

For many years Fort Snelling located in St. Paul, Minnesota at the junction of the Minnesota and Mississippi rivers was the only outpost in the area but as the population advanced new army posts where created to keep the frontier defended. One of these was Fort Gaines, which started out its life as a fort in 1849 as a frontier army garrison. This Fort was later renamed to Fort Ripley on November 4th, 1850 due to another military post taking the same name. With its location on the upper Mississippi River in Northcentral Minnesota, this fort was on the far edge of the northwestern frontier when it was in operation. This fort was geographically remote and situated upon an important supply route and the growing Crow Wing settlement which showed government presence in the vast wilderness of Minnesota. The remote base was created based on a treaty in 1864 that removed the Winnebago Indians from the northeastern lands of Iowa to a reservation nearby in Long Prairie. This base was also hoped to serve as a buffer between the Sioux and Chippewa tribes that were feuding. Fort Ripley began construction in November of 1848 on the opposing side of the river from Balwin Olmsteam a pioneer farmer, who provided supplied for soldiers to construct this fort.  In April of 1849, Company A the 6th U.S. Infantry became the first garrison at Fort Ripley. The company consisting of two officers, four sergeants, three corporals, and thirty-nine privates came from Fort Snelling in St. Paul, MN on orders from Captain John B. Todd.  While the time at Fort Ripley was very uneventful, the isolation, mosquitoes, and long cold winters challenged all the personal that called this fort home. The regular duty of these soldiers was a march to the Long Prairie Agency to supervise government payments of money and goods to the Winnebago done twice a year. This was also done with the Ojibwa tribe at the agency in Crow Wing.  In 1855 the Winnebago tribe moved yet again to a more comfortable location in Blue Earth County in south-central Minnesota. In July of 1857 with the move of the tribe the post was no longer needed at Fort Ripley, so the army closed the fort. But as of September, the Fort was activated again due to lawlessness actions among the Ojibwa and whites in the region. Alexander Wilken one of the many new commanding officer arrived at For Ripley in June of 1861 and received $2000 a year with a $36 a month bonus for being a commanding officer due to the remoteness of this location many officers found it unfit for their needs and didn’t stay for long. In January 1877 three buildings burned down and rather than repair the War Department decided to close down Fort Ripley rather than rebuild. Fort Ripley contained nearly ninety-one square miles of land which was to be sold off to locals but was annulled due to low sale prices.

Then the Civil War stared in April of 1861, the employed soldiers were withdrawn from the fort to fight the Confederates in the south one of those being Full Captain Timothy Sheehan. Sheehan and the rest of Company C joined the 5th Minnesota Regiment in the Mississippi to fight the Confederate troops. Under Sheehan’s leadership the 5th regiment participated in the Siege of Vicksburg, the Battle of Nashville and a plethora of other battles. Sheehan was later promoted to a lieutenant but was wounded days after in battle by a Ojibwe band member on the Pine Ridge Reservation. For the period of the civil war many volunteer regiments where sent to man Fort Ripley. In 1862, a variety of Indian attacks occurred throughout southern Minnesota. One of the large largest being the siege of New Ulm, Minnesota, where Dakota warriors passed up an attack on Fort Ridgely and turned to killing settlers along the Mississippi. By the time they had arrived in New Ulm residents had organized a defense, but the Dakota warriors penetrated the defenses and burned much of the town. The Ojibwe chief Hole in the Day residing in Crow Wing threatened to launch attacks against whites. This threat leads to the taking of prisoners and destruction of many buildings. One the many prisoners taken was Chief Hole in the Day. This was due to the Chief threatening that he was going to clean out the country and drive onward to St. Paul. This word was spread to Lucius C. Walker of the Chippewa Agency who then notified Fort Ripley that action needed to be taken. The next morning two dozen soldiers arrived at Crow Wing and were ordered to proceed to the house of Hole in the Day and arrest him. Just outside of the Chiefs residents the soldiers where spotted and Hole in the Day darted into the woods with his wives and children and began crossing the Mississippi River in canoes. On the other side of the river shots were fired by the chief and the soldiers, while Hole in the Day made an escape he was struck by one bullet. Due to these actions Hole in the Day began to incite an uprising and sent messages of war to all the Chippewa bands as far north as Lake Superior. The Dakota warriors attacked several stagecoach stops and river crossings along the Mississippi halting mail carriers, stagecoach drivers and military couriers. Due to these actions settlers flocked to Fort Ripley for protection from the Native Americans which required a large increase of soldiers that where sent up from Fort Snelling. The strengthened defenses defused the threat from the Native Americans in September. But the results of these increased defenses began three years of the U.S.-Dakota War otherwise known as Minnesota’s Other Civil War. Resulting in Fort Ripley becoming the headquarters, supply base, and staging location for military campaigns extending to the Yellowstone River. The peak in activity occurred in the winter of 1863 to 1864 when approximately four hundred troop and five hundred horses were housed serving to protect the settlers and surrounding economy.

Camp Ripley was selected as replacement for Camp Lakeview by Ellard Walsh in 1929. This tract of land as selected due to the large combinations of fields and forests in the vicinity, and coincidently incorporated the remains of Fort Ripley. First starting off with approximately thirteen thousand acers growing until 1961 which an ending acreage of fifty-three thousand acres. Construction of this camp began in 1930 with the creation of buildings, utilities, field ranges, and roads. By 1931 the first troops began to arrive for military training. The Ray S. Miller Airfield was built in 1933 created due to the creation of the 109th Observation Squadron which was the predecessor to the Minnesota Air National Guard and first federally recognized National Guard air unit in the United States. The construction continued over time and by 1940 the camp could house twelve thousand troops at any given time. By the 1960s the camp had many firing ranges, specialized training areas, six thousand feet of railhead, and more than two hundred and fifty miles of trails and roads. As many National Guard camp where, Camp Ripley was a tent camp like most National Guard camps of this era, which enlisted men would erect and live in. This post was very important to the United States Army due to its large scale. This large scale allows for multiple regular army and national guard troops from several states to prepare and practice straights and tactics.

During World War Two the United States Government took over Camp Riley for use as an Air Service Force for the Seventh Service Command. From July 1942 to October 1943 approximately one thousand federal troops received varying degrees of training at Camp Ripley. Most trainees later where assigned to the 960th air base security battalion or a military police aviation training company. These battalions where very valuable overseas due to the functions that they could provide the most effective defense of airfields. The 99th division was started at Camp Ripley in August of 1942 and grow to seven hundred men where it then transferred to Fort Snelling. The infantry division otherwise know as the battle babies played a strategic role in the Battle of the Bulge when the inexperience troops held the northern shoulder of a German advance. Refusing the Germans access to the northern road network that led to Belgium which was vital to the Germans. One the 99th Division had left Camp Ripley became home to the 394th army air force band and the home of the 173rd station hospital. This station hospital was a two hundred and fifty bed tent hospital which was the only of this kind in the United States. In the winter of 1942 to 1943 the camp housed one thousand soldiers but during the summers camp Ripley was able to house seven thousand due to the outdoor tent camps that could be erected. In this case the tents where erected to house the military police training center but due to camp Ripley not being intended for a winter training camp the United States government found the winter difficult to train the quantity that they had wanted to. This lead to a decision to discontinue the use of Camp Ripley for wartime training. Nearly all the federal troop has been transferred out in October of 1943 and that winter the U.S. government returned the use of the base back to the states control. The state then decided to train the State Guard at Camp Ripley which would act as a home defense force which acted as a substitute for the National Guard. Due to the National Guard being federalized due to the war. Following the end of World War Two, the Minnesota National Guard troops that had served as part of the 34th Infantry Division where pushed out of federal service. This prompted for the reorganization of the entire National Guard causing the 34th Infantry Division to move to Iowa while the 47th Infantry Division was created to take place of it. A large quantity of time was spent on recruiting in order to bring the 47th Infantry Division the strength of the federal requirements of the National Guard. Where training encampments occurred at Camp Ripley in 1947 for the Guard. The 47th Infantry Division was federalized in January 1951 for service in the Korean War where troops were sent to Camp Rucher in Alabama for training.