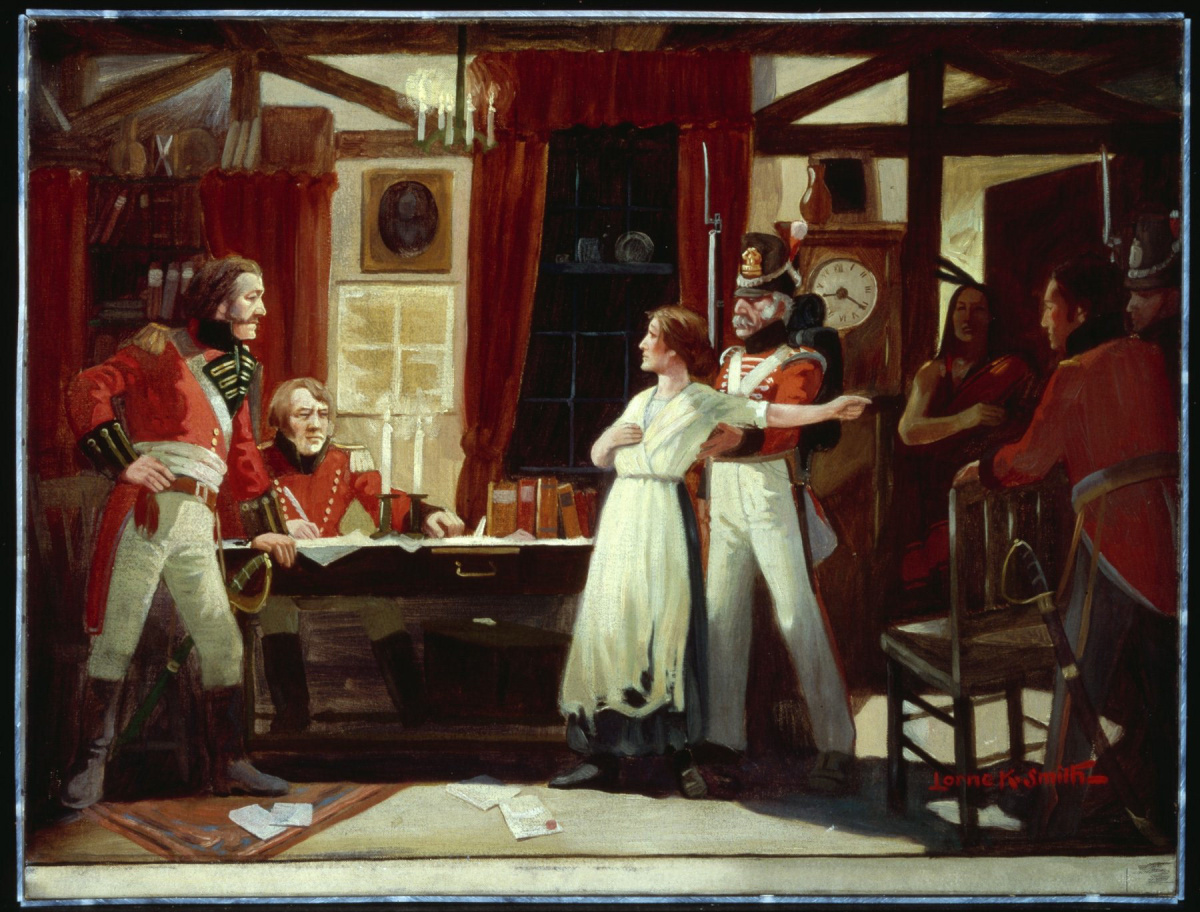 The Battle of Beaver Dams was a battle in present-day Thorold, Canada that took place on June 24, 1813, between American troops and British troops with native American allies. The battle was heavily influenced by a woman named Laura Secord and influenced the war of 1812.

The Battle of Beaver Dams was part of the Niagara phase of the War of 1812. It took place during the “see-saw” battles of 1813 which started when American forces successfully took Fort George in May of 1813. Once the Americans had captured Fort George, they tried to further expand their territory by attempting to take the area around Fort George. The battles resulting from this expansion attempt are known as the “see-saw” battles. The Battle of Beaver Dams was one of these battles.

The events leading up to the Battle of Beaver Dams began when about 600 American troops led by Lieutenant Colonel Charles G. Boerstler left fort George on June 23, 1813. They had orders to carry out an attack on the garrison at Beaver Dams. With these instructions, Boerstler and his men began the 20-mile march towards Beaver Dams. Boerstler’s plan was to march to the village of Queenston where he and his men would spend the night of the 23rd. They would then march the rest of the way to Beaver Dams and spend the night of the 24th near Beaver Dams so that they could carry out a surprise attack on Beaver Dams in the early hours of the 25th.

Once Boerstler and his men reached the village of Queenston, he and his men stayed with the residents of Queenston who were forced to feed the troops and give them a place to sleep. While they were spending the night in Queenston, some of the troops stayed in the house of James and Laura Secord. These troops and especially the actions of Laura Secord would completely change the outcome of the upcoming battle.

The village of Queenston was a small town near the Niagara River about 8 miles to the north of Niagara Falls and was made mostly of people who were loyal to Britain and were not fond of America much less the American occupation of their town. When the American troops forced the residents of Queenston to feed and house them for the night, most of the residents were unhappy but most of them just gave in and did not make any real trouble for the Americans. This was not the case for Laura Secord.

Laura Secord was the wife of James Secord who was a Sargent in the first militia regiment of Lincoln county. They had a house in Queenston at the time of the Battle of Beaver Dams. At the time, Laura was helping James recover from a gunshot wound in his knee and another in his shoulder that he received in the battle of Queenston Heights. When the Americans entered the town, some of them, including an American officer stayed in Laura’s house. Laura recognized the officer as Cyrenius Chapin who was a famous American Military leader at the time. Secord knew that if Chapin was involved with what the Americans were doing, it must be important. Secord decided that she would try and figure out what was going on and use the information against the Americans.

Laura Secord left her house at dawn to try and warn the garrison at beaver dams. She only brought the clothes she had on so that she would not raise any suspicion from Americans noticing that she was leaving town. Secord knew that using the main roads was out of the question. She knew that the roads were far too well patrolled by the Americans, so she was forced to take the less-traveled roads and trails. The first leg of her journey was to get to St. David’s, a church not far from her home. While Secord was making her way there, she was stopped by an American guard who asked her where she was going and why she had left so early. She told the American that she was going to St. David’s to visit her brother who was sick and wounded and was being taken care of at St. David’s. Secord also told the guard that she had left so early because if she had left any later, the June heat would have made her faint. The guard bought her story and let her pass. The next leg of Secord’s journey was to get through the Black Swamp.

The Black Swamp was a several mile-wide swamp full of quicksand and snakes. Secord was reluctant to cross the swamp but since she could not use the roads, it was the only way for her to reach Beaver Dams. As she was making her way through the swamp, she encountered many snakes and even lost her shoe in the quicksand, but she kept going. Eventually, Secord made it out of the Black Swamp. The hardest part of journey was over, but she still had a long way to go. Once Secord made it out of the swamp, the only major challenge left was crossing Twelve Mile Creek. Twelve Mile Creek was flowing especially fast due to an abundance of rain that spring so there was no obvious way for Secord to cross the Creek. Luckily for her, a tree had fallen across the Creek which made a good enough bridge that she could crawl across it and wade the rest of the way across the river. While she was wading, she lost her other shoe. Secord was now Barefoot. Once Secord was across Twelve Mile Creek, all that was left for her was to walk the remaining couple miles to Beaver Dams and find Lieutenant FitzGibbon, the commander of the Beaver Dams garrison.

As Secord made her way towards Beaver Dams, she found herself at a Native American camp. Luckily for her, they were allies with the British force at beaver dams. After doing her best to explain to the Chief that she was trying to reach Lieutenant FitzGibbon, the Chief and one of his men brought her to a house nearby where Lieutenant FitzGibbon was staying. After explaining to FitzGibbon who she was and what the American forces plans were, Secord’s journey was finally over. If Laura Secord had not walked the 20 miles to warn the garrison at Beaver Dams, they would have not been prepared for the attack at all. The garrison would have fallen but thanks to Laura Secord, they had time to prepare and come up with a plan on how to repel the incoming force.

The Battle of Beaver Dams

After the American forces left Queenston, they marched along the main road until they were only a few miles away from the garrison. They then set up camp and spent the night in a farmer’s field with the intention to attack the garrison in the morning. They were completely unaware that as of that evening, they were being watched by Fitzgibbon’s men. After Laura Secord had warned FitzGibbon about the approaching Americans, he had sent out scouts to find, monitor, and report the movements and actions of the enemy. While FitzGibbon’s situation was now much better than it had been before Laura Secord warned him, the odds still were not in his favor. His 50 British regulars were still hopelessly outnumbered by Boerstler’s 600 Americans. FitzGibbon decided that the best way to defeat the Americans was to surprise them using his Native American allies.

The Battle of Beaver Dams was not particularly costly for either side in terms of loss of life or damage, with about 100 killed or wounded on the American side and about 25 Native Americans killed or wounded on the British side. It was, however, a pivotal battle in the war of 1812. The garrison at Beaver Dams was the last major British position in the Niagara Peninsula and if the garrison had fallen, the Americans would have had total control of the Peninsula. Not only did the battle allow the British to maintain some control of the Peninsula but it was also hugely demoralizing for the American forces at fort George. After the defeat, the Americans rarely ventured far from the protective walls of fort George and they were generally unproductive in the war effort until they abandoned the fort 6 months later in December of 1813. The Battle of Beaver Dams also turned the tides of the War of 1812 in the Niagara theater squarely in British favor. After the British victory at Beaver Dams, the British Started a Campaign to force the Americans out of the Niagara theater that was hugely successful for the British. The Battle of Beaver Dams could have easily been an embarrassing defeat for the British but thanks to the warning from Laura Secord and the quick thinking by Lieutenant FitzGibbon, the battle became an embarrassing defeat for the Americans.

3 Hickey, Donald R. The War of 1812: Writings from Americas Second War of Independence. The Library of America, 2013.