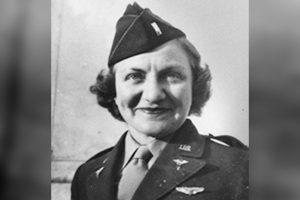 Aleda E. Lutz, nicknamed ‘Lutzy’ was the first woman to receive the Distinguished Flying Cross award in military history. She was also the first woman killed in World War II. As a flight nurse with nearly 200 missions, Aleda saw combat in Tunisia, Italy, France, and Sicily helping to evacuate over 3,500 men [2]. Over the course of her life she challenged herself to further the war effort and in the course of her career, she became the first woman to receive the Distinguished Flying Cross award. By hearing her story, all can appreciate not only her life, dedication, and service, but also uncover a new aspect to World War II that most people are unaware of. Telling her story will allow the stories of other brave, strong women throughout history to be told.

Born in Freeland, Michigan, to German immigrants, Aleda was the youngest and only child of 10 to graduate from high school. From graduation, she pursued a degree in nursing from Saginaw General Hospital School of Nursing. It was here, in these years, that she found her true calling for medicine and helping people. When World War II broke out, she saw this as her chance to not only practice medicine, but by enlisting, to help her country in a way that was invaluable and patriotic.

When she enlisted in November of 1941, she was at Station Hospital in Selfridge Field, Michigan. She worked there as a general duty nurse. When the opportunity to be part of a new program that came to be known as the Winged Angels of World War II, began, she took full advantage. The process to become a flight nurse had many rigorous requirements and restrictions, least of which were that they could not be over 135 pounds, and had to be under 36 years of age. To become a flight nurse, one had to pass numerous tests and have knowledge on everything from plane sickness and aero-medicine, to chemical warfare and logistics. As an avid athlete, Aleda took on all of these tests and became one of only two women in her entire class to pass all of the tests and graduate to become part of the 802nd Medical Air Evacuation Transportation Squadron; The first team of flight nurses to be deployed across seas.

As a flight nurse with the 802nd Medical Air Evacuation Transportation Squadron, or MAES, Aleda was first sent to North Africa. The squadron there evacuated soldiers from the battlefield, but were quickly transferred to other locations. In Judith Barger’s biography Beyond The Call Of Duty, which detailed the specifics of flight nursing in World War II, Barger details the journey that the 802nd squadron took beginning in North Africa. The flight nurses were transferred to many locations during their time in service, including Sicily, Palermo, Lido di Roma, and for Aleda, Saint-Chamond France. The majority of the squadron’s missions were flown out of Maison Blanche in Paris, France, which was under an hour away by plane from the front lines. For Aleda, Saint-Chamond France became her last mission when the mission plane she was on was caught in a storm and crashed, leaving no survivors.

During her time as a flight nurse, it was her responsibility to evacuate injured soldiers from war zones by getting them onto medical planes and making sure that they were stable during flight. This included going into active war zones to pick up injured soldiers, which not many people would voluntarily do. A flight nurse had to be able to teach active men the best methods for transporting wounded soldiers onto and off of planes. While in flight, Aleda had to know the best place to put a certain soldier, and what care to give them so that they would make it back to the base alive for more intensive care. Caring for these wounded soldiers included everything from oxygen, to IV’s. At times, being a flight nurse simply meant staying next to a shell-shocked solider, comforting them, and listening to what they had to say. Sometimes, their presence was the only thing they could offer [3]. The most important thing for any flight nurse, and Aleda, was to be flexible. Missions could suddenly arise, and a flight nurse could be on a flight within the hour. There would have been patients who’s condition worsened during evacuation, variable weather conditions, and the possibility of being grounded overnight away from base.

Life was not constant mission flights and danger though. Missions that required a flight nurse did not fly at night, and when missions began to come faster and more frequent, commanders made sure that their nurses did not become over worked or lose hope. The 802nd MAES and Aleda always made the most of their time off. When they were not on missions, they spent time in the community and rest camps. In particular, the Isle of Capri became known for many serving in the war as the perfect place to relax safely away from the war front. One flight nurse even went so far as to describe it as “like stepping into Heaven” [3]. Untouched from the war.

During the height of World War II, it was common for nurses to be shipped out on missions with little notice. This short response time allowed for many lives to be saved. In the Evening Star of March 19, 1943, it was reported that within 48 hours, 21 planes could fly 500 wounded men at least 4,000 miles away from the combat zone [2]. This was made possible by the hard-working efforts of the flight nurses. Over the course of her military career, Aleda herself flew a total of 196 missions. This was more hours than any other flight nurse had logged in history.

Over the course of her military career, Aleda was granted many awards. The Distinguished Flying Cross for heroism during flight, the Air Medal along with four Oak Leaf Clusters signified the award of in total, four Air Medals. She received the European-African-Middle Eastern Campaign Medal for serving in those areas respectively, and the Red Cross Medal for volunteering and enlisting in the war. She was also awarded a Purple Heart, an award only given to those who had been injured or died in war. In 2009 at the yearly Liberation of Draguignan ceremony in France, a Memorial Service for those who died in service, Marice Dreclerc’s Remembrance Day speech commemorated Lieutenant Lutz’s service and life. In his speech he described her, her achievements, and her awards in this way:

“These honors make Aleda E. Lutz, so is her name, one of the highest decorated women in the history of the United States of America.”

Aleda Lutz died on November 1, 1944 when the mission plane she was on got caught in a storm and crashed near St. Chaumon, France. Tragically, no one on board survived. She was buried there in Northern France with the rest of those who were on the flight mission. There is now a monument at the St.Chaumon crash site in remembrance of those who lost their lives. The plaque, written in French, roughly translates to:

“To the memory of the five American Dakota crew members and the fifteen Allied and German wounded soldiers who died in the crash of November 1, 1944. Under the responsibility of Nurse Lieutenant Aleda E. Lutz DFC who was the first military woman to be operational during the Second World War.”

The plaque is fused to a large stone that has been placed at the site of the crash in remembrance.

This plaque is not the only memory of her and service sacrifice for America. Every year, in France, there is a memorial service for those buried in Lorraine American Cemetery in Northern France, where Aleda was buried. Along with everyone on board the flight, she shared common values and a pride to fight for her country. 1990, the Aleda E. Lutz VA Medical Center, was officially recognized in name by Congress, although it had opened its doors nearly forty years earlier [2]. The naming of this hospital after a woman was only made possible thirty years after the building had been completed. The congressional resolution to allow the building to be named after a woman had been denied since 1950 [2]. This medical center specifically serves veterans from any wars, veterans who have served our country, veterans who need medical care. At this VA Center, a wide range of services are offered even today, including everything from homeless services to surgery. The Aleda E. Lutz VA Medical Center honors the sacrifices that Aleda made, and honors her legacy. Her legacy reaches beyond the hospital as well. In 1945 there was a former troopship turned hospital ship named after her, originally named the Colombie, [3] this ship was renamed, and it honored the sacrifice Aleda made when she died in France. There was also a C-47 plane named in honor of her. Although Aleda Lutz is gone, her legacy lives on. She did not see her service as an obligation or a threat as many would have, instead she saw her service as a challenge. The legacy she left has allowed other brave, strong women’s stories throughout history to be told.