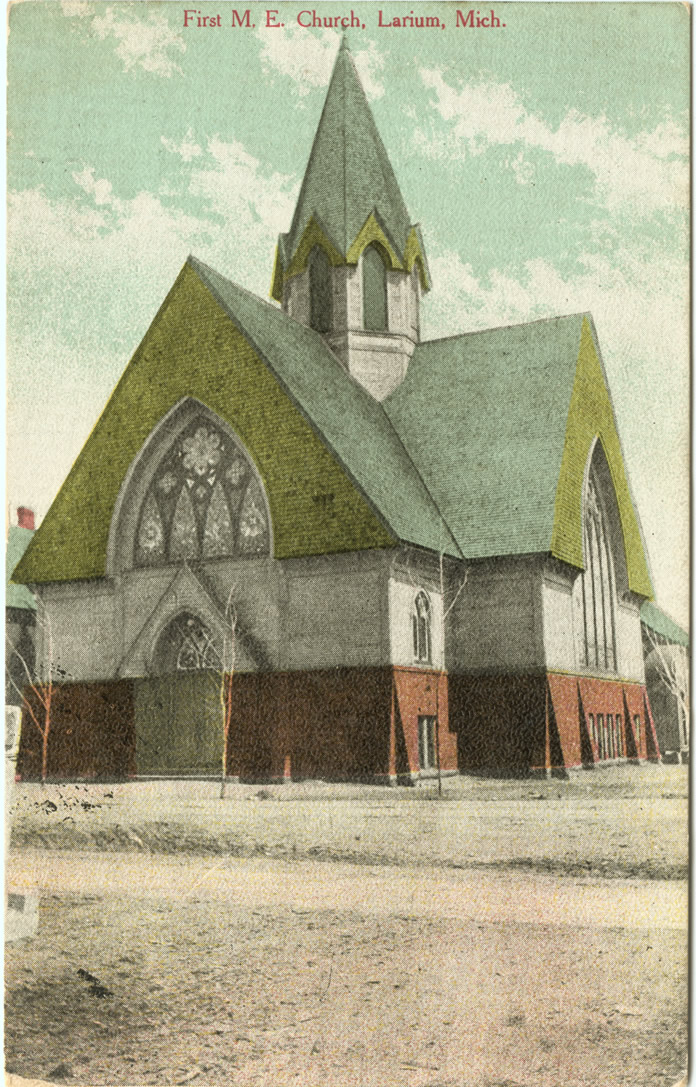 In 1898 about thirty Methodists living in the relatively young village of Laurium decided to form their own church, separate from the Methodist church on Calumet Avenue in Calumet. Four years later, they had 160 members and a new church building. The cornerstone was laid in June 1902 and the building was dedicated four months later.1

To achieve this, the church hired a fundraiser, Joseph W. Powell of Buffalo, who had raised a million dollars for Methodist churches in the previous year. Powell’s “unique and copyrighted system” was to sell stock in the church, at $36 a share, with interest at 6 percent for that unpaid after January 1, 1903. Through this system, the church’s debt was retired by January 1. The cost of construction was about $14,000.2

Wells D. Butterfield designed a compact church with a prominent brick first floor, clapboarded second floor, and large shingled gables. Large Gothic-arched, stained-glass windows were set into the gables, echoed by a smaller Gothic arch over the doorway, set into a triangular pediment. At the crossing of the gable roofs, a handsome steeple arose. Decorative details included brackets at the cornice, sandstone trim, and buttresses.

Around 1910, the church built a large addition to the south. At the juncture with the new construction, a square tower supported the moved steeple. The new construction used the same materials as the original building. N. S. Bray was the contractor for this work, which cost nearly $10,000. With the new addition, the church could seat 1,000 people.3

Buildings by Wells Butterfield in the Copper Country